The invasive soybean aphid, Aphis glycines, is a major pest in soybeans, resulting in substantial economic loss. We analyzed the A. glycines transcriptome to identify sequences derived from viruses of A. glycines. We identified sequences derived from a novel virus named Aphis glycines virus 2 (ApGlV2). The assembled virus genome sequence was confirmed by reverse transcription polymerase chain reaction (RT-PCR) and Sanger sequencing, conserved domains were characterized, and distribution, and transmission examined. This virus has a positive sense, single-stranded RNA genome of ~4850 nt that encodes three proteins. The RNA-dependent RNA polymerase (RdRp) of ApGlV2 is a permuted RdRp similar to those of some tetraviruses, while the capsid protein is structurally similar to the capsid proteins of plant sobemoviruses. ApGlV2 also encodes a larger minor capsid protein, which is translated by a readthrough mechanism. ApGlV2 appears to be widespread in A. glycines populations and to persistently infect aphids with a 100% vertical transmission rate. ApGlV2 is susceptible to the antiviral RNA interference (RNAi) pathway. This virus, with its unique genome structure with both plant- and insect-virus characteristics, is of particular interest from an evolutionary standpoint. View Full-Text
Keywords: insect virus; soybean aphid; plant virus; readthrough domain; small RNA virus insect virus; soybean aphid; plant virus; readthrough domain; small RNA virus
►▼ Show Figures 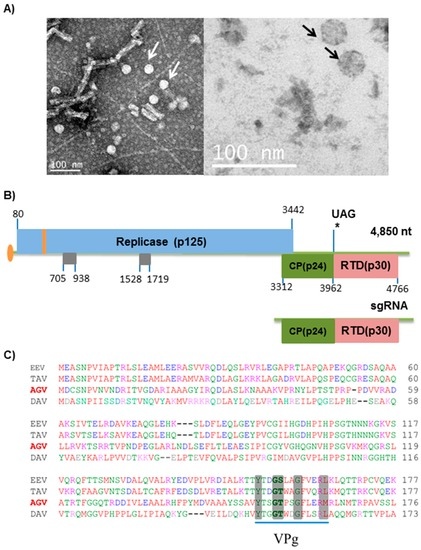