The Expanding Family of Virophages
Previous Article in Journal

Most viruses are known for the ability to cause symptomatic diseases in humans and other animals. The discovery of Acanthamoeba polyphaga mimivirus and other giant amoebal viruses revealed a considerable and previously unknown area of uncharacterized viral particles. Giant viruses have been isolated from various environmental samples collected from very distant geographic places, revealing a ubiquitous distribution. Their morphological and genomic features are fundamental elements for classifying them. Herein, we report the isolation and draft genome of Cedratvirus, a new amoebal giant virus isolated in Acanthamoeba castellanii, from an Algerian environmental sample. The viral particles are ovoid-shaped, resembling Pithovirus sibericum, but differing notably in the presence of two corks at each extremity of the virion. The draft genome of Cedratvirus—589,068 base pairs in length—is a close relative of the two previously described pithoviruses, sharing 104 and 113 genes with P. sibericum and Pithovirus massiliensis genomes, respectively. Interestingly, analysis of these viruses’ core genome reveals that only 21% of Cedratvirus genes are involved in best reciprocal hits with the two pithoviruses. Phylogeny reconstructions and comparative genomics indicate that Cedratvirus is most closely related to pithoviruses, and questions their membership in an enlarged putative Pithoviridae family. View Full-Text
Keywords: giant viruses; Cedratvirus; Pithovirus; viral family; double-cork; co-culture; Acanthamoeba giant viruses; Cedratvirus; Pithovirus; viral family; double-cork; co-culture; Acanthamoeba
►▼ Show Figures 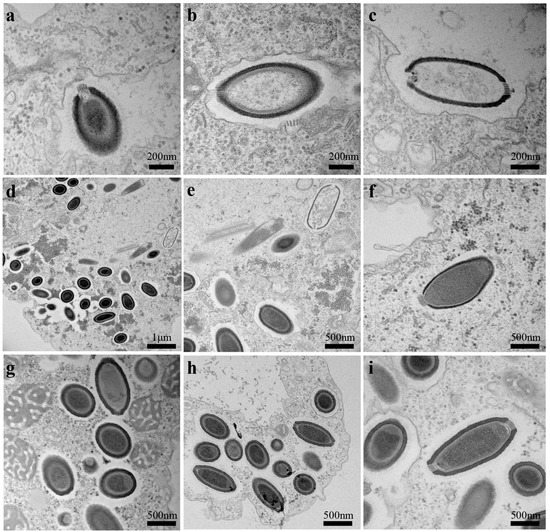