Eradication of HIV-1 from the Macrophage Reservoir: An Uncertain Goal?
Previous Article in Special Issue

Anticarsia gemmatalis is an important pest in legume crops in South America and it has been successfully controlled using Anticarsia gemmatalis Multiple Nucleopolyhedrovirus (AgMNPV) in subtropical climate zones. Nevertheless, in temperate climates its speed of kill is too slow. Taking this into account, genetic modification of AgMNPV could lead to improvements of its biopesticidal properties. Here we report the generation of a two-component system that allows the production of recombinant AgMNPV. This system is based on a parental AgMNPV in which the polyhedrin gene (polh) was replaced by a bacterial β-galactosidase (lacZ) gene flanked by two target sites for the homing endonuclease I-PpoI. Co-transfection of insect cells with linearized (I-PpoI-digested) parental genome and a transfer vector allowed the restitution of polh and the expression of a heterologous gene upon homologous recombination, with a low background of non-recombinant AgMNPV. The system was validated by constructing a recombinant occlusion-positive (polh+) AgMNPV expressing the green fluorescent protein gene (gfp). This recombinant virus infected larvae normally per os and led to the expression of GFP in cell culture as well as in A. gemmatalis larvae. These results demonstrate that the system is an efficient method for the generation of recombinant AgMNPV expressing heterologous genes, which can be used for manifold purposes, including biotechnological and pharmaceutical applications and the production of orally infectious recombinants with improved biopesticidal properties. View Full-Text
Keywords: AgMNPV; recombinant baculovirus; bioinsecticide; Anticarsia gemmatalis; velvetbean caterpillar AgMNPV; recombinant baculovirus; bioinsecticide; Anticarsia gemmatalis; velvetbean caterpillar
►▼ Show Figures 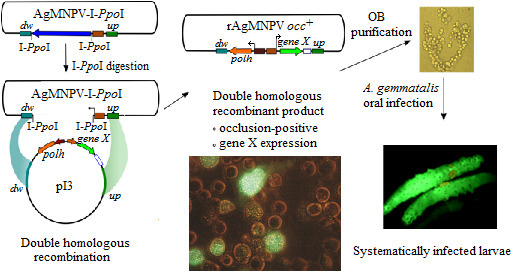