Bacillus anthracis is a potent biowarfare agent, able to be highly lethal. The bacteria dwell in the soil of certain regions, as natural flora. Bacteriophages or their lytic enzymes, endolysins, may be an alternative for antibiotics and other antibacterials to fight this pathogen in infections and to minimize environmental contamination with anthrax endospores. Upon screening environmental samples from various regions in Poland, we isolated three new siphophages, J5a, F16Ba, and z1a, specific for B. anthracis. They represent new species related to historical anthrax phages Gamma, Cherry, and Fah, and to phage Wbeta of Wbetavirus genus. We show that the new phages and their closest relatives, phages Tavor_SA, Negev_SA, and Carmel_SA, form a separate clade of the Wbetavirus genus, designated as J5a clade. The most distinctive feature of J5a clade phages is their cell lysis module. While in the historical phages it encodes a canonical endolysin and a class III holin, in J5a clade phages it encodes an endolysin with a signal peptide and two putative holins. We present the basic characteristic of the isolated phages. Their comparative genomic analysis indicates that they encode two receptor-binding proteins, of which one may bind a sugar moiety of B. anthracis cell surface. View Full-Text
Keywords: Bacillus anthracis; bacteriophages; complete genomic sequence; siphovirus; Wbetavirus; endolysin; receptor-binding protein; arbitrium system; phage tail Bacillus anthracis; bacteriophages; complete genomic sequence; siphovirus; Wbetavirus; endolysin; receptor-binding protein; arbitrium system; phage tail
►▼ Show Figures 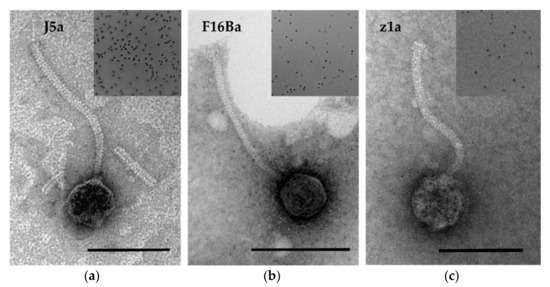