Construction, Identification and Analysis of the Interaction Network of African Swine Fever Virus MGF360-9L with Host Proteins
Next Article in Special Issue

High Heterogeneity of Echoviruses in Brazilian Children with Acute Gastroenteritis

We used wastewater-based epidemiology and amplicon-based long-read high-throughput sequencing for surveillance of enteroviruses (EVs) in Maricopa County, Arizona, Southwest United States. We collected 48 samples from 13 sites in three municipalities between 18 June and 1 October 2020, and filtered (175 mL each; 0.45 µm pore size) and extracted RNA from the filter-trapped solids. The RNA was converted to cDNA and processed through two workflows (Sanger sequencing (SSW) and long-read Illumina sequencing (LRISW)) each including a nested polymerase chain reaction (nPCR) assay. We subjected the ~350 bp amplicon from SSW to Sanger sequencing and the ~1900–2400 bp amplicon from LRISW to Illumina sequencing. We identified EV contigs from 11 of the 13 sites and 41.67% (20/48) of screened samples. Using the LRISW, we detected nine EV genotypes from three species (Enterovirus A (CVA4, EV-A76, EV-A90), Enterovirus B (E14) and Enterovirus C (CVA1, CVA11, CVA13, CVA19 and CVA24)) with Enterovirus C representing approximately 90% of the variants. However, the SSW only detected the five Enterovirus C types. Similarity and phylogenetic analysis showed that multiple Enterovirus C lineages were circulating, co-infecting and recombining in the population during the season despite the SARS-CoV-2 pandemic and the non-pharmaceutical public health measures taken to curb transmission.
Keywords: wastewater-based epidemiological monitoring; Enterovirus C; human; high-throughput nucleotide sequencing; Arizona; environmental monitoring wastewater-based epidemiological monitoring; Enterovirus C; human; high-throughput nucleotide sequencing; Arizona; environmental monitoring

Enteroviruses (EVs) are non-enveloped, positive-sense, single-stranded RNA viruses that belong to the genus Enterovirus, family Picornaviridae, order Picornavirales. Within the genus, there are over 300 serologically distinct genotypes categorized into 15 species (Enterovirus A to L and Rhinovirus A–C) [1]. The polioviruses (serotypes 1, 2 and 3) are the best studied members of the genus Enterovirus and are members of species Enterovirus C alongside 22 other serotypes, including coxsackievirus (CV)A1, CVA11, CVA13, CVA19 and CVA24. As a result of establishing a correlation between EV serotypes and their VP1 gene sequence [2], EV typing by serological assays has been replaced by VP1 gene, complete capsid, or whole-genome sequence analysis [3].
Annually in the USA, EVs cause approximately 15 million infections and tens of thousands of hospitalizations [4] with a wide range of clinical manifestations that range from mild (e.g., runny nose and fever) to severe presentations such as intra-uterine infection with fetal death and acute flaccid myelitis (AFM) [5,6].
Recently, wastewater-based epidemiology (WBE) has been employed to monitor viruses in the population as an alternative or complementary approach to case-based surveillance (CBS). The WBE approach is especially important for EV surveillance and molecular epidemiology, considering only 0.5–1% of infections show clinical manifestations, but all EV-infected individuals shed virus in high titers (~108 virus particles per gram) in feces [7]. Previous studies have used WBE for detecting EV presence and, more importantly, describing EV dynamics in populations [8,9,10,11,12,13].
The current SARS-CoV-2 pandemic has overwhelmed pathogen surveillance globally, resulting in reduced surveillance of other pathogens [14]. It has, however, been suggested that the observed decrease in detection of other viruses (including those transmitted via non-respiratory routes such as EVs) might not be the result of reduced surveillance. Rather, it is thought that non-pharmaceutical measures taken to mitigate SARS-CoV-2 transmission have also impacted pathogens transmitted via the fecal–oral route such as EVs [15,16].
In this study, we use WBE for EV surveillance (as a prototype for viruses transmitted via the fecal–oral route) over a 15 week period during the traditional peak of the EV transmission season [17] in three municipalities in Maricopa County, Arizona, Southwest, USA. We show that even at the height of the SARS-CoV-2 pandemic, EV circulation was ongoing in this population. Our results show the importance of WBE for virus surveillance at the population scale, especially in conditions where clinical or case-based pathogen diagnostics is inadequate or overwhelmed.

It is important to emphasize that only the 25 samples that yielded amplicons (~350 bp, as viewed through an agarose gel imager) suggestive of EV presence in the SSW were subjected to the LRISW (Table 2 and Table S1). Twenty (80%) of the 25 samples were positive for the LRISW and subjected to long-read Illumina sequencing (Table 2). The remaining five (5) samples were negative for both PCR assays (3a and 3b in Figure 1A) in the LRISW.

Pairwise distance analysis of all EV types recovered using the LRISW showed divergence ranging from 0.65% to 26.16% and 0.48% to 28.08% using LRISW assays 3a and 3b, respectively (Table S2). When viewed by day of sampling, divergence per EV type in one sample varied from 0.09% to 24.37% and 0.05% to 28.08% using LRISW assays 3a and 3b, respectively (Table S1). It should be noted that assay 3b contigs span VP1-2C genomic region. Hence, the divergence described in Table 2, Tables S1 and S2 cover VP1-2C and does not represent divergence in the P2 (2A-2C) genomic region only.
We performed phylogenetic analysis for all EV types with >15% divergence (Table S2) and all showed (with strong bootstrap support) that multiple lineages were present and circulating in the population (Figures S1–S3). For the EV type (CVA1) with most divergence (exceeding 20% in contigs recovered using both assays 3a and 3b, Table S2) we included representative sequences from GenBank to the alignment and showed that the topology of both trees remained consistent that in Figure S1 further confirming that multiple lineages were present and circulating in the population (Figure 4).
NJ phylogenetic trees of the most abundant EV species detected (species C) showed that all assay 3a (VP4-VP1) contigs (LRISW) clustered by type but phylogeny violations were observed for CVA1 and CVA19 in the assay 3b (VP1-2C and 2A-2C) contigs (Figure 5). Particularly, for the VP1-2C tree (Figure 5) CVA1 contigs 982, 1525 and 1642 clustered with CVA19. For these contigs we repeated their identification using EGT and BLASTn and confirmed they were indeed CVA1 (Figure S4). We therefore made NJ and ML phylogenetic trees of CVA1 and CVA19 contigs only, and these showed that the phylogeny violation was only in the 2A-2C genomic region (Figure 6 and Figure S5).
These phylogeny violations fell into two clusters, CVA1 and CVA19 from ST9-d0 and another involving CVA19 from ST4-d0 and CVA1 from ST7-d0 (Figure 5, Figure 6 and Figure S5). Hence, suggesting recombination (as a result of CVA1 and CVA19 co-infection) might be occurring in the 2A-2C (P2 genomic region) of CVA1 and CVA19 variants circulating in the population. However, though the assays were run with enzymes with high fidelity and processivity, for samples from ST9-d0, because variants of both CVA1 and CVA19 genomic regions were in the mix during PCR amplification it is difficult to rule out the possibility that this recombination signal could be due to template switching during the PCR amplification process. However, this is less likely for the signal involving CVA19 from ST4-d0 and CVA1 from ST7-d0 as both were from different samples.

The authors thank the City of Tempe for sample collection. We also thank the Genomics Core at Arizona State University for help with Sanger sequencing and Loop Genomics for help with long-read Illumina sequencing. We especially thank Tuval Ben Yehezkel for post-sequencing support. 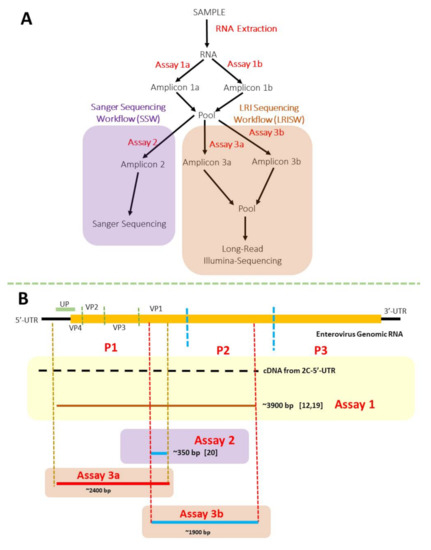 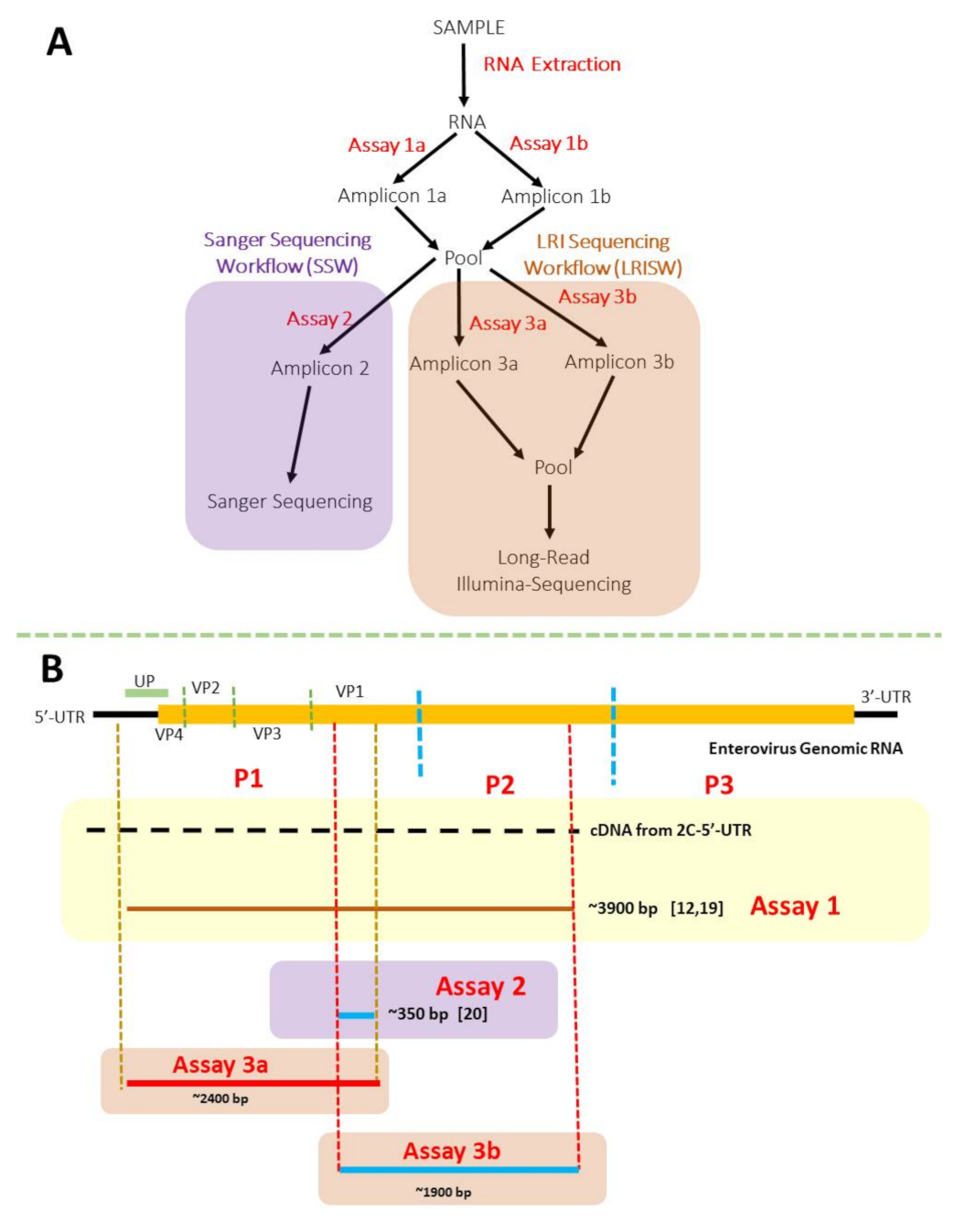 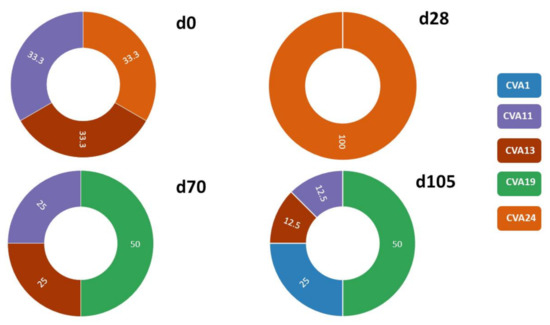 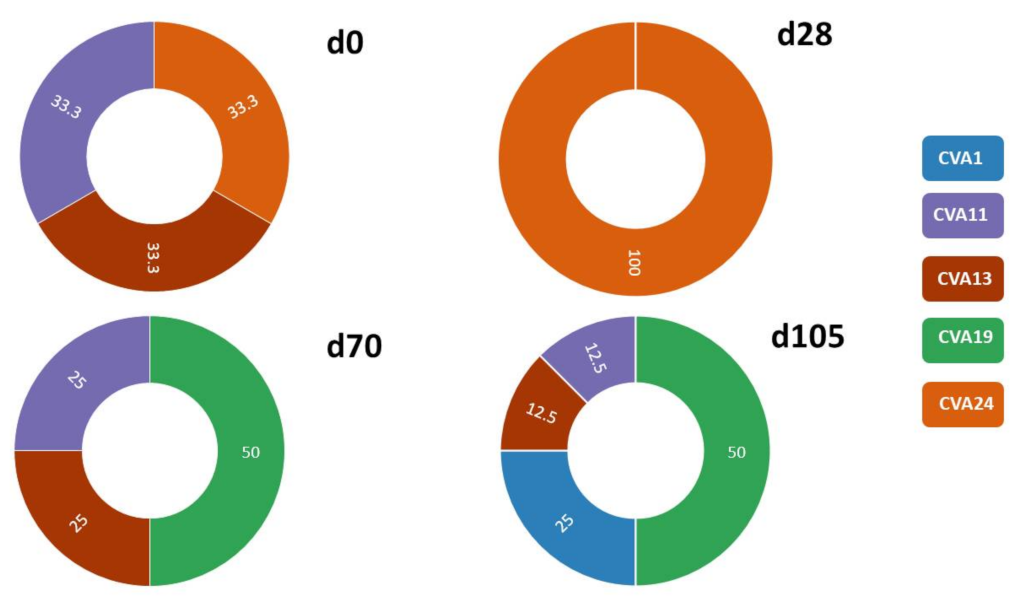 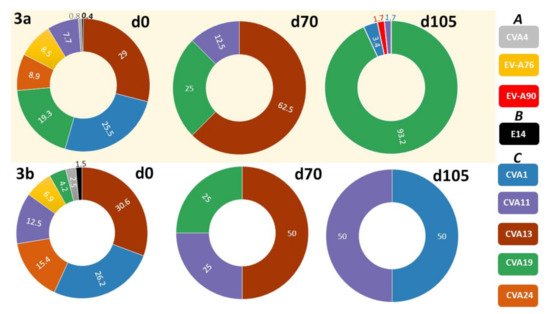 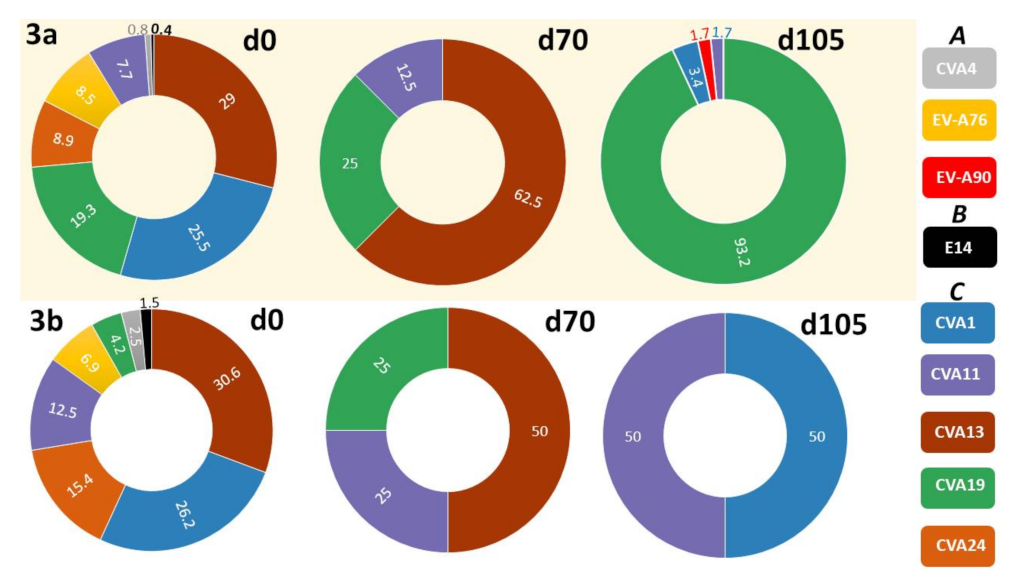 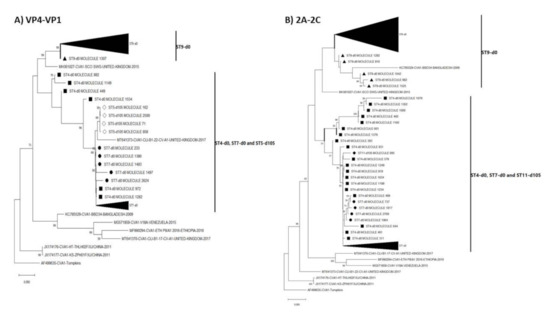 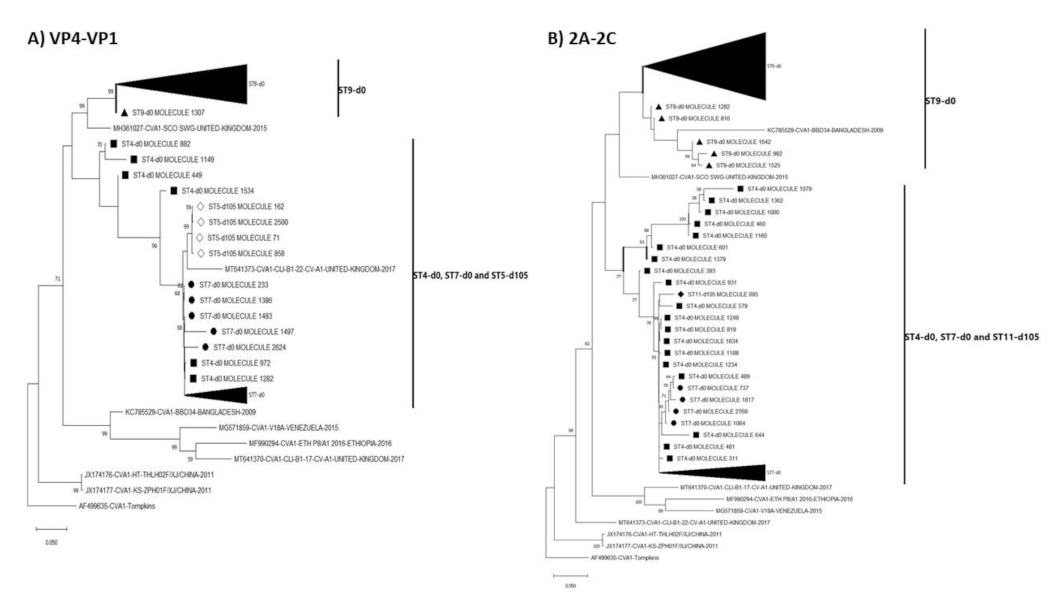 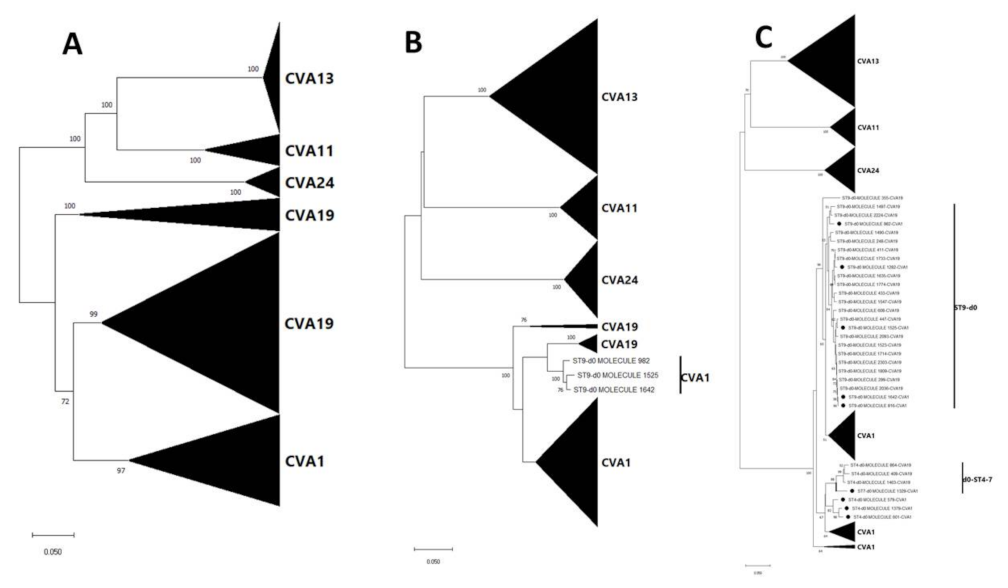 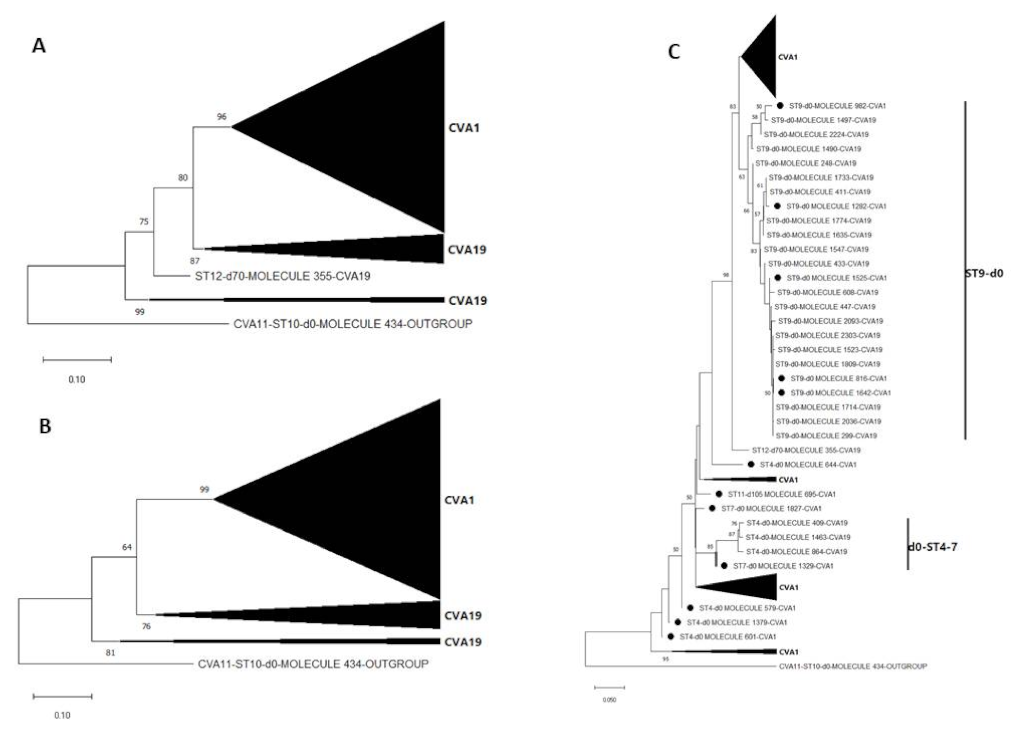