The Impact on Infectivity and Neutralization Efficiency of SARS-CoV-2 Lineage B.1.351 Pseudovirus

The COVID-19 is an ongoing pandemic caused by severe acute respiratory syndrome coronavirus 2 (SARS-CoV-2). This COVID-19 pandemic has occurred not only as a devastating global health crisis with notable mortality but also tremendous socioeconomic damage. As of 6 February 2021, more than 100 million confirmed cases and 2 million deaths have been reported globally. Thus, in an attempt to put an end to this pandemic, one of the encouraging approaches is the development of anti-viral antibodies that neutralize spike protein of SARS-CoV-2. The spike protein of SARS-CoV-2 has been shown to be necessary for viral entry into the host cells. For this, the S1 subunit of spike protein binds to the cellular receptor, angiotensin-converting enzyme 2 (ACE2) and the S2 subunit of spike promotes fusion between viral and cellular membranes. In addition, the spike glycoprotein being a key antigenic determinant, serves as a primary target of neutralizing antibodies. Because of the two functions mediated by the spike protein, mutations of this protein are quite major concerns, as they alter the biochemistry of the spike, which in turn affects the transmissibility, and/or immunogenicity of SARS-CoV-2.
In fact, SARS-CoV-2 continues to accrue considerable mutations in its genome despite harboring the proofreading function [1]. The first reported emerging SARS-CoV-2 mutation, D614G, has now become the most common form in the world. Mounting results reported that pseudoviruses encoding D614G mutant show higher infectivity than the original strain [2,3,4]. A SARS-CoV-2 variant with D614G substitution was shown to enhance transmissibility and competitive fitness in animal models and human cell cultures [4]. Furthermore, structural analysis elucidated that D614G mutation led to a conformational change of the receptor-binding domains (RBDs), indicating that enhanced the ability to attach to the ACE2, ultimately induced higher infectivity [5,6]. The patients who were infected with SARS-CoV-2 D614G strain were associated with higher viral loads but not disease severity and mortality [7]. Fortunately, vaccines with verified efficacy against the ancestral SARS-CoV-2 are also efficacious against the D614G variant [8].
Recently, the new emergence of SARS-CoV-2 variants B.1.1.7 in the UK and B.1.351 in South Africa (SA) have raised particular concerns owing to increased prevalence and multiple mutations in the spike protein [9]. In the case of B.1.1.7, a series of mutations in eight sites including D614G appeared in the spike protein: Δ69Δ70, Δ144Δ145, N501Y, A570D, P681H, T716I, S982A, and D1118H (https://www.gisaid.org; GISAID, accessed on 1 December 2020). Among them, Δ69Δ70 and N501Y in B.1.1.7 lineage have been shown to cause a conformational change in the spike protein and have higher infectivity than D614G, suggesting that they may increase transmissibility and alter antigenicity [10,11]. Remarkably, B.1.351 contains additional two mutations, K417N and E484K, in receptor binding motif (RBM) of the RBD region and those may potentially induce a conformational change of the spike protein, and subsequently increase the infectivity of B.1.351 than other lineages. However, it is still unclear as to whether those mutations may affect viral infectivity, transmissibility, or antibody-mediated neutralization.
In this study, we examined the biological significance of SARS-CoV-2 variant B.1.351 with particular amino acid changes in the spike protein. To address this, we generated seven different spike mutants in RBD that indicated either Wuhan or B.1.351 and then analyzed their infectivity, cleavage efficacy, and escape capacity to neutralizing antibodies using pseudoviruses. We show that SARS-CoV-2 B.1.351 variant harboring K417N and E484K mutations have naturally evolved to possess notable alterations in their infectivity and S1/S2 cleavage, leading to enhanced syncytium formation and antigenicity. Fortunately, we found that Imdevimab was still able to fully neutralize against the B.1.351 lineage, while Casirivimab significantly reduced its neutralizing activity.

Using the quantitative RT-PCR, we calculated RNA copy numbers and normalized the pseudovirus to the same amount. After normalization, individual spike variant pseudoviruses or VSV-G pseudovirus were transduced into different cell types and added Bright-Glo (Promega) at 24 h after transduction. Relative luminescence unit (RLU) was measured by Varioskan Lux microplate reader (Thermo). Results were calculated as a folding activity compared to the SARS-CoV-2 spike wild-type sample. All experiments were performed in triplicate.

Plasmids encoding SARS-CoV-2 spike WT or variants were transfected into Vero cells using FuGENE HD (Promega) following the protocol provided by the manufacturer. Twenty-four hours after transfection, cells were treated with 1 μg/mL of TPCK-trypsin (Thermo) for 6 h and the medium was replaced with complete DMEM. Then cells were incubated for 18 h and fixed with 4% paraformaldehyde followed by Giemsa staining. Stained cells were visualized with EVOS-M5000 imaging system (Invitrogen) and syncytia containing more than 3 nuclei were counted.

Herein, known neutralizing monoclonal antibodies for SARS-CoV-2, Casirivimab and Imdevimab, were chosen for neutralization assay [14,15]. In brief, receptor-binding domain (RBD) of the spike was synthesized and cloned into an inline fusion of C-terminus Fc tagged vector for mammalian cell expression in a form of RBD-Fc [14]. The construct was transfected into HEK293E cells and protein G agarose (Merck Millipore) was used for affinity purification of the expressed RBD-Fc. The efficacy of neutralization was measured by the reduction of luciferase expression, as described previously [12]. In brief, individual pseudoviruses were incubated with serial dilutions of monoclonal antibody preparation for 30 min at room temperature, as triplicate and subsequently was added to the cells. Following 24 h of incubation, the luminescence was measured by Varioskan Lux microplate reader. At least triplicate results were obtained. The IC50 values were calculated with non-linear regression, i.e., log (inhibitor) vs response (four parameters), using GraphPad Prism 8 (GraphPad Software, Inc., San Diego, CA, USA).

Statistical analyses were performed with GraphPad Prism 8 software. p-values were calculated by Student’s t-test and p < 0.05 denoted statistical significance. Data are presented as the mean ± SD.

The structures used to model the wild-type trimeric spike protein of SARS-CoV-2 and human ACE2 protein were taken from the PDB site (https://www.rcsb.org, accessed on 1 December 2020), which is determined by cryo-electron microscopy (cryo-EM) of SARS-CoV-2 spike in complex with an antibody (PDB code 72CL) and of full-length human ACE2 in complex with SARS-CoV-2 spike RBD (PDB code 6M17). In order to build missing residues in the spike protein, homology modeling was employed to generate the whole spike protein structure using the SWISS-MODEL server (https://swissmodel.expasy.org, accessed on 1 December 2020, accession number P0DTC2). The 4 selected mutants (D614G, N501Y/D614G, K417N/501Y/D614G, and E484K/N501Y/D614G) in the spike protein were generated using the Build Mutant protocol in Discovery Studio 2020 (Dassault Systèmes BIOVIA, San Diego, CA, USA, 2020). The complex structures between the SARS-CoV-2 spike protein and ACE2 were constructed based on the cryo-EM structures as a template using the Superimpose Proteins Tool in Discovery Studio 2020.

The monomeric SARS-CoV-2 spike/ACE2 residues 21-615 complex models for each mutant were used as the starting structures in the MD simulations. Desmond v6.4 (Desmond Molecular Dynamics System; D. E. Shaw Research: New York, NY) and OPLS3e force field were used in the MD simulations using Schrödinger Suite 2020-4 (Schrödinger, LLC, New York, NY, USA, 2020). The System Builder was used for solvation employing predefined TIP3P water molecules in an orthorhombic box with dimensions of 15 Å × 15 Å × 15 Å, and the overall complex was neutralized by adding Cl− counterions. The NaCl salt concentration was 0.15 mol/L. Production of MD simulations at 100 ns in length proceeded under periodic boundary conditions in the NPT ensemble at normal temperatures (300 K) and pressure (1.01325 bar), where the coordinates were written at intervals of 100 ps.

After the MD simulations, the binding free energies of the systems were calculated through the MM/GBSA model as implemented in the Prime MM/GBSA module in the Schrödinger Suite 2020-4. The OPLS3e force field, VSGB solvation model, and the default Prime parameters were used for the MM/GBSA calculations. The binding free energy was calculated for 10 frames based on the last 100 ns MD trajectory. The final frame of trajectories was analyzed after the MD simulations to compare and observe the structural deviation between wild-type and mutant structures of the SARS-CoV-2 spike RBD complexes.

We thank Lee’s lab members for their supports and discussions. 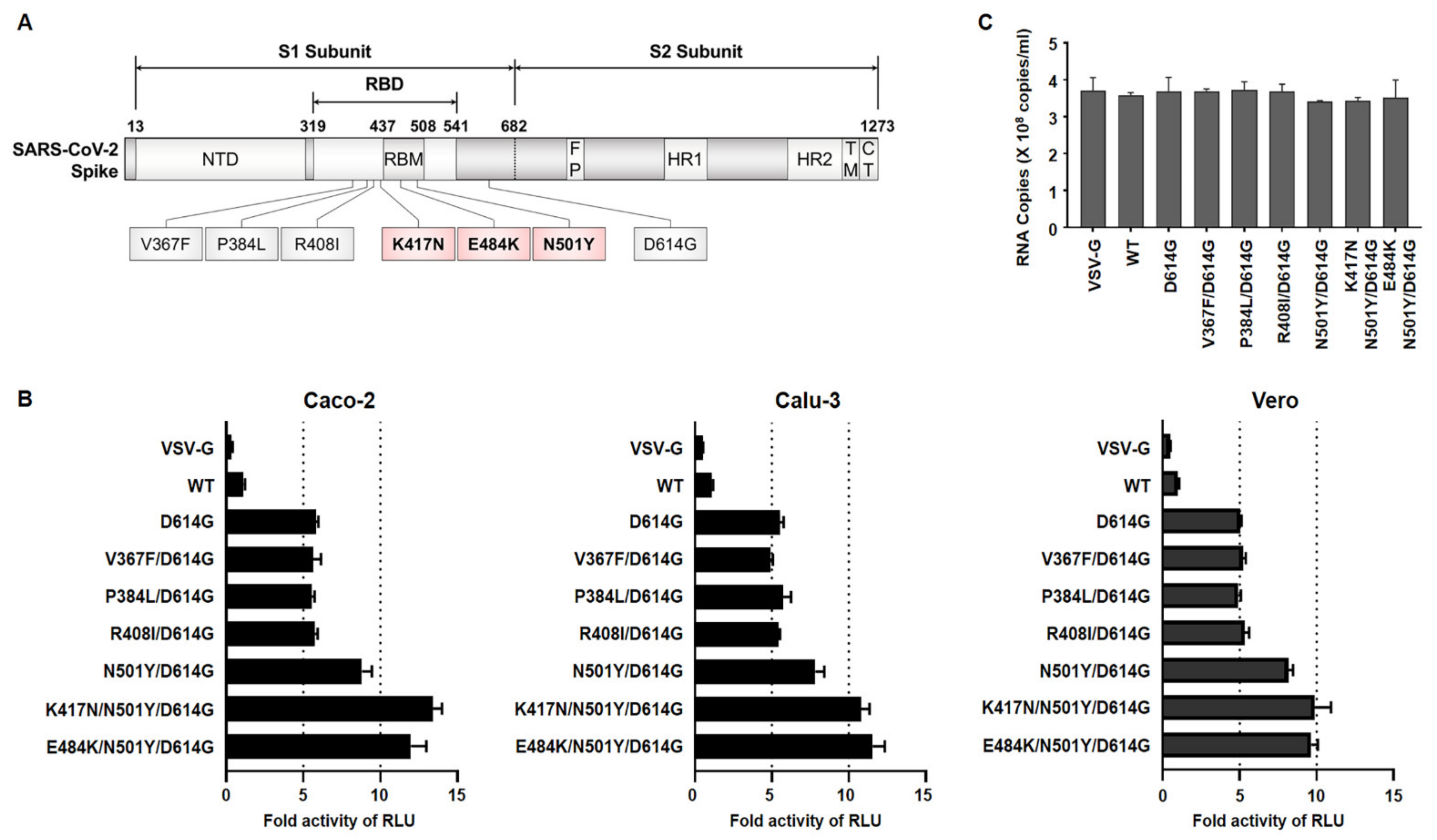 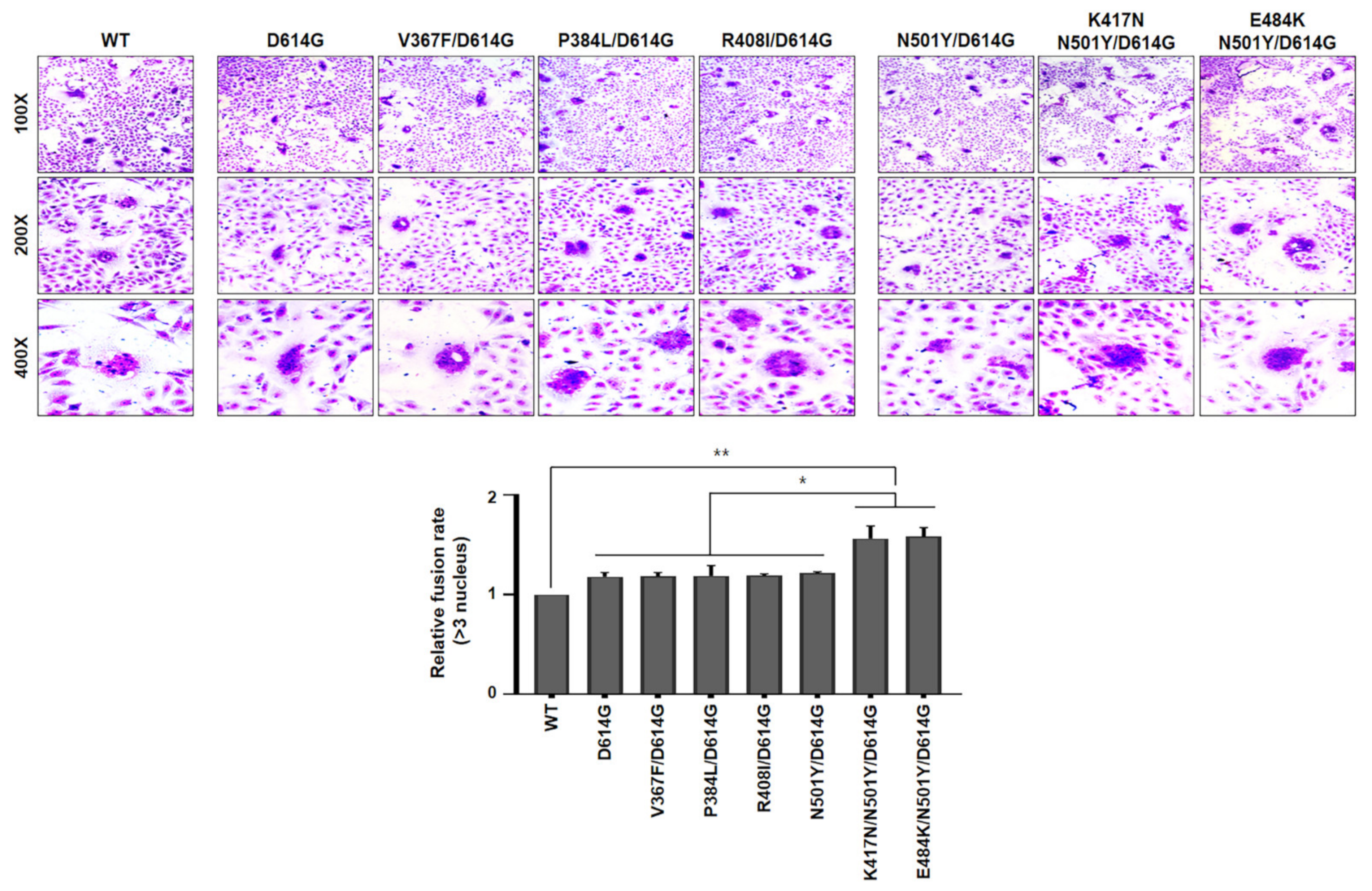