Nuclear egress is an essential process in the replication of human cytomegalovirus (HCMV), as it enables the migration of newly formed viral capsids from the nucleus into the cytoplasm. Inhibition of the HCMV core nuclear egress complex (core NEC), composed of viral proteins pUL50 and pUL53, has been proposed as a potential new target for the treatment of HCMV infection and disease. Here, we present a new type of small molecule inhibitors of HCMV core NEC formation, which inhibit the pUL50-pUL53 interaction at nanomolar concentrations. These inhibitors, i.e., verteporfin and merbromin, were identified through the screening of the Prestwick Chemical Library® of approved drug compounds. The inhibitory effect of merbromin is both compound- and target-specific, as no inhibition was seen for other mercury-organic compounds. Furthermore, merbromin does not inhibit an unrelated protein–protein interaction either. More importantly, merbromin was found to inhibit HCMV infection of cells in three different assays, as well as to disrupt HCMV NEC nuclear rim formation. Thus, while not being an ideal drug candidate by itself, merbromin may serve as a blueprint for small molecules with high HCMV core NEC inhibitory potential, as candidates for novel anti-herpesviral drugs. View Full-Text
Keywords: human cytomegalovirus; nuclear egress complex (NEC); core NEC inhibitor; antiviral activity; small molecule inhibitor human cytomegalovirus; nuclear egress complex (NEC); core NEC inhibitor; antiviral activity; small molecule inhibitor
►▼ Show Figures 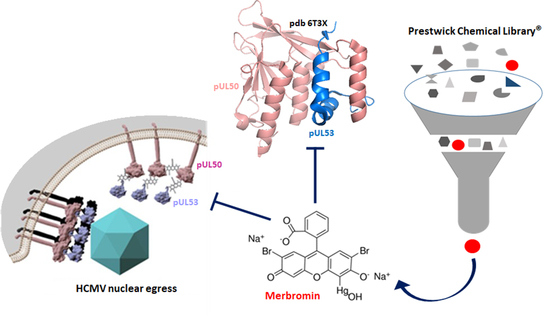