West Nile Virus Lineage 1 in Italy: Newly Introduced or a Re-Occurrence of a Previously Circulating Strain?
Previous Article in Journal

:
Mosquitoes collected from mid-December 2020 to early March 2021 from hibernacula in northeastern Germany, a region of West Nile virus (WNV) activity since 2018, were examined for WNV-RNA. Among the 6101 mosquitoes tested in 722 pools of up to 12 specimens, one pool of 10 Culex pipiens complex mosquitoes collected in early March 2021 in the cellar of a medieval castle in Rosslau, federal state of Saxony-Anhalt, tested positive. Subsequent mosquito DNA analysis produced Culex pipiens biotype pipiens. The pool homogenate remaining after nucleic acid extraction failed to grow the virus on Vero and C6/36 cells. Sequencing of the viral NS2B-NS3 coding region, however, demonstrated high homology with virus strains previously collected in Germany, e.g., from humans, birds, and mosquitoes, which have been designated the East German WNV clade. The finding confirms the expectation that WNV can overwinter in mosquitoes in Germany, facilitating an early start to the natural transmission season in the subsequent year. On the other hand, the calculated low infection prevalence of 0.016–0.20%, depending on whether one or twelve of the mosquitoes in the positive pool was/were infected, indicates a slow epidemic progress and mirrors the still-hypoendemic situation in Germany. In any case, local overwintering of the virus in mosquitoes suggests its long-term persistence and an enduring public health issue.
Keywords:
Culex pipiens; first report; Germany; mosquito vectors; overwintering; transmission; West Nile virus

West Nile virus (WNV) is a flavivirus (family Flaviviridae) pathogenic to humans, horses, and birds. While the majority of infections in humans are asymptomatic and only a few infected people develop neurological symptoms, the virus is quite regularly neuroinvasive in horses and certain groups of birds, causing a high degree of mortality [1]. WNV is transmitted by mosquito species of various genera, with Culex pipiens being the most important vector species [2]. Susceptible birds not prone to developing the disease (mainly Passeriformes) act as virus vehicles, amplifiers, and reservoirs, infecting feeding mosquitoes, which may then transmit the virus to other groups of vertebrates [3,4]. Horses and humans are considered viral dead-end hosts, which do not develop viremias sufficiently high to infect feeding mosquitoes [5].
During the large European West Nile virus epidemic in 2018, which affected 15 countries with 2083 human infections, including 166 fatal ones, and 285 equine outbreaks in EU member states [6,7], the virus emerged for the first time in Germany [8]. In both 2019 and 2020, case numbers increased in Germany, with the first human case diagnosed in 2019 and the first fatal human case occurring in 2020 [9,10]. Confirmed cases were determined in northeastern Germany, notably in areas of Berlin and Leipzig [11].
In 2019, field-collected mosquitoes in Germany were found to be infected with WNV for the first time. In the Berlin Game Park where birds had previously succumbed to WNV infection, mosquito collections and viral screening produced seven WNV-positive pools of Cx. pipiens biotype pipiens and Cx. pipiens biotype pipiens/molestus mosquitoes [12].
The continuation of the epidemic over the years raised the question whether the virus was regionally maintained during wintertime or was repeatedly introduced by birds during the summer. Phylogenetic comparisons of WNV strains isolated in Germany and other European regions in different years and from different hosts showed a close relationship among most of the German strains, and suggested an introduction from the neighboring Czech Republic [8,9]. Repeated seasonal reintroduction from other European countries can therefore not be discounted. On the other hand, viral maintenance in overwintering female mosquitoes has been demonstrated elsewhere [13,14,15,16,17], suggesting that reintroduction is not necessary to start a new transmission season. To check for WNV overwintering in mosquitoes in Germany, hibernating adult mosquitoes were collected from their resting places during the winter of 2020/2021 in northeastern Germany, the known hotspot region of WNV emergence.

Mosquitoes were collected between mid-December 2020 and mid-March 2021 in 20 bat hibernation quarters (ice cellars, tunnels, bunkers, water regulation constructions, and underground levels of abandoned factories) in the German federal states of Berlin, Brandenburg, Saxony, and Saxony-Anhalt, access to which was obtained through bat specialists counting overwintering bats. Mosquitoes were manually collected with vials from their resting sites on walls and ceilings, put into a transportable freezing box (−20 °C) to kill and fix them, and brought into the laboratory, where the vials were put into the freezer (−20 °C) until further processing. Mosquito identification took place morphologically to species or complex/group level on a chilling table under a stereomicroscope, using determination keys by Schaffner et al. [18] and Becker et al. [19]. For RNA/DNA extraction, mosquitoes were then pooled according to species, and collection site and date, with up to five specimens in the case of Culiseta species and up to 12 specimens in the case of Culex and Anopheles species.
For both viral screening and genetic mosquito identification, nucleic acid extraction was performed following Kampen et al. [12]. Genetic identification of mosquitoes in the Cx. pipiens complex pool was conducted according to Heym et al. [20].

Extracts from the mosquito pools were subjected to a Flaviviridae real-time PCR targeting the NS5 gene [21] and a Pan-Alphaviridae-PCR targeting the nsP4 gene [22]. A pool positive for Flavivirus-RNA was cross-checked by unidirectional sequencing of the PCR product using the forward primer and the BigDye Terminator v1.1 Cycle Sequencing Kit (Applied Biosystems/Hitachi, Darmstadt, Germany).

Vero cells (L0015, Collection of Cell Lines in Veterinary Medicine, Friedrich-Loeffler-Institut, Greifswald, Germany) are routinely grown in MEM with Hank’s and Earle’s salts, non-essential amino acids, and 10% fetal bovine serum (FBS) at 37 °C and 5% CO2. C6/36 cells are kept in Schneider’s insect medium supplemented with 10% FBS at 28 °C.
Virus isolation was attempted as described in Kampen et al. [12]. Briefly, the mosquito homogenate was applied to Vero and C6/36 cells in the presence of penicillin and streptomycin (Gibco/Thermo Fisher Scientific, Dreieich, Germany) and cultivated for several days, with daily observation to check for the appearance of a cytopathic effect.
Cells were passaged once and co-cultured with naïve cells during the cultivation period. Cells and cell culture supernatant were tested for the presence of viral RNA by two RT-qPCRs, using primers targeting either the 5′-untranslated region or the NS2A region [23]. Samples were considered positive with Ct values higher than that expected simply through the addition of the inoculum.

2.4. RNA Extraction and Partial Sequencing of the Viral NS2B-NS3 Region

Among all the pools tested for viruses, one single pool collected on 9 March 2021 in a dungeon of a medieval castle in Rosslau, federal state of Brandenburg (Figure 1), was WNV-RNA-positive according to NS5 and NS2B-NS3 gene PCR and sequencing. Based on the number of mosquitoes tested, an infection prevalence of 0.016–0.20% was calculated, depending on the number of positive mosquitoes in the pool (1–12 positive specimens out of 6101 tested). The minimum infection rate (MIR) would thus be 0.16, assuming that only one mosquito included in the pool was positive [25].
Attempts to grow the virus from the respective mosquito homogenates on Vero and C3/36 cells remained unsuccessful, even after one blind passage, as checked by RT-qPCR. No full-length WNV-RNA could be extracted from the cells, whereas amplification and sequencing of the NS2B-NS3 coding region of the RNA extracted from the original mosquito homogenate showed a complete match to the strain found in mosquitoes in 2019, which belonged to WNV lineage 2 [9,12].

This research was funded by the German Federal Ministry of Food and Agriculture (BMEL) through the Federal Office for Agriculture and Food (BLE), grant numbers 2819104615 and 2818SE001.

Data are contained within the Supplementary Material.

We are grateful to Freja Pfirschke and Kerstin Wink-Kruschke (Friedrich-Loeffler-Institut, Greifswald, Germany) for excellent technical assistance in the laboratory. 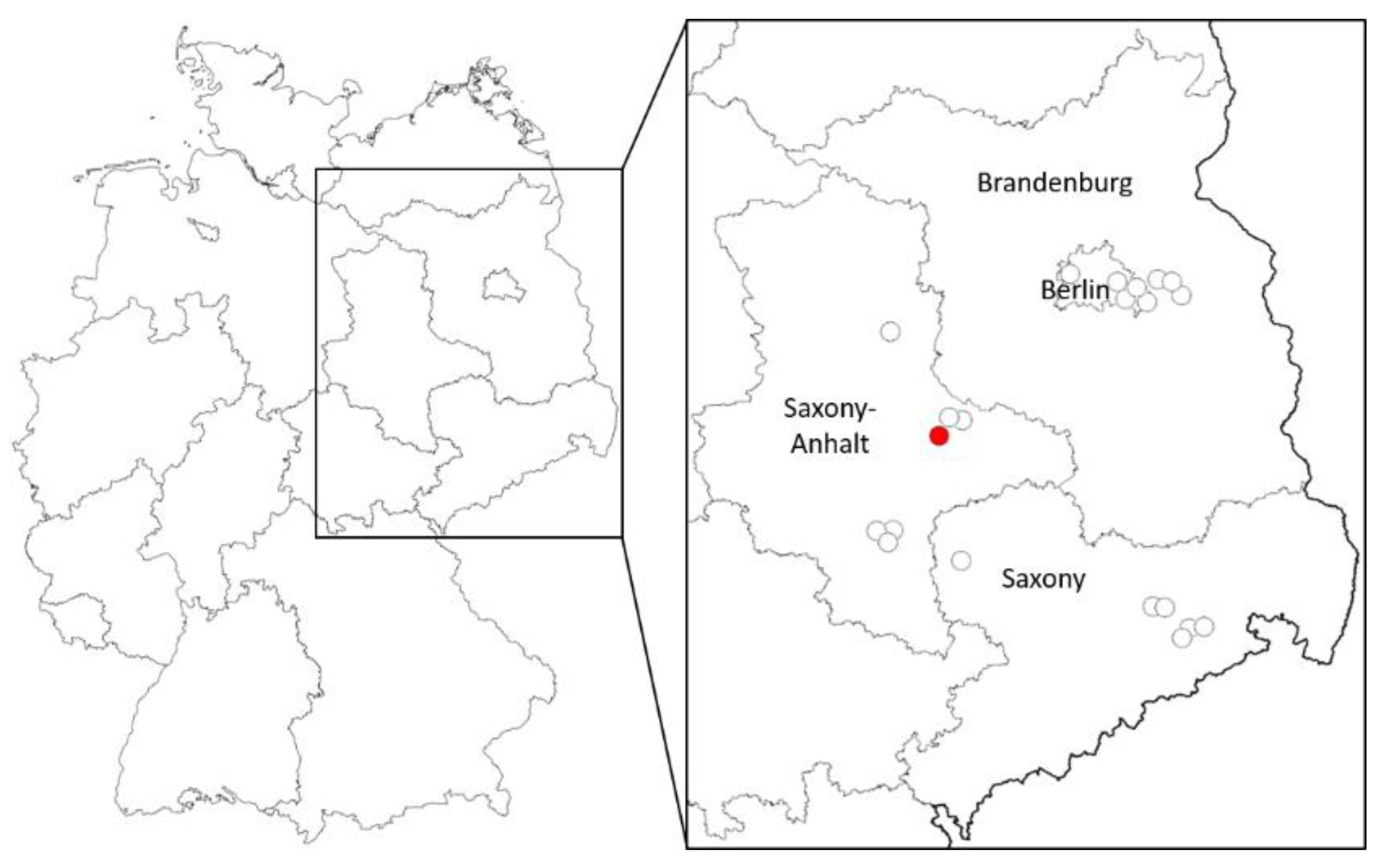