Fast, Reliable, and Simple Point-of-Care-like Adaptation of RT-qPCR for the Detection of SARS-CoV-2 for Use in Hospital Emergency Departments
Previous Article in Journal

Influenza A and D Viruses in Non-Human Mammalian Hosts in Africa: A Systematic Review and Meta-Analysis

The use of high-throughput sequencing has facilitated virus discovery in wild animals and helped determine their potential threat to humans and other animals. We report the complete genome sequence of a novel picornavirus identified by next-generation sequencing in faeces from Australian fallow deer. Genomic analysis revealed that this virus possesses a typical picornavirus-like genomic organisation of 7554 nt with a single open reading frame (ORF) encoding a polyprotein of 2225 amino acids. Based on the amino acid identity comparison and phylogenetic analysis of the P1, 2C, 3CD, and VP1 regions, this novel picornavirus was closely related to but distinct from known bopiviruses detected to date. This finding suggests that deer/bopivirus could belong to a novel species within the genus Bopivirus, tentatively designated as “Bopivirus C”. Epidemiological investigation of 91 deer (71 fallow, 14 sambar and 6 red deer) and 23 cattle faecal samples showed that six fallow deer and one red deer (overall prevalence 7.7%, 95% confidence interval [CI] 3.8–15.0%) tested positive, but deer/bopivirus was undetectable in sambar deer and cattle. In addition, phylogenetic and sequence analyses indicate that the same genotype is circulating in south-eastern Australia. To our knowledge, this study reports for the first time a deer-origin bopivirus and the presence of a member of genus Bopivirus in Australia. Further epidemiological and molecular studies are needed to investigate the geographic distribution and pathogenic potential of this novel Bopivirus species in other domestic and wild animal species. View Full-Text
Keywords: Bopivirus; complete genome; viral metagenomics; viral isolation; phylogenetics; deer Bopivirus; complete genome; viral metagenomics; viral isolation; phylogenetics; deer
►▼ Show Figures 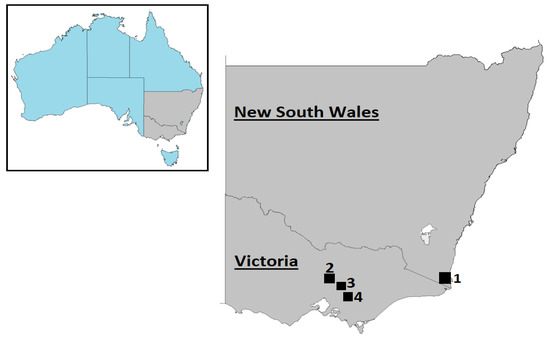