Dengue virus (DENV) belongs to the Flaviviridae family, and it comprises four antigenically distinct serotypes (serotypes 1–4). DENV is transmitted to humans by the Aedes mosquito [1]. Specific antiviral treatment or a global licensed vaccine against DENV is currently unavailable. The manifestations of DENV infection include symptoms that range from mild dengue fever (DF) to the more severe forms that include dengue hemorrhagic fever (DHF) and dengue shock syndrome (DSS) [2]. The pathogenesis of DENV infection has been extensively investigated; however, it is still not completely understood.
Liver injury is very frequently identified in severe dengue infection [3], and it has been found to be correlated with the clinical pathology [4,5]. An example of this relationship was the observed elevation of aminotransferases. Reactive hepatitis with hepatic failure was also reported in patients with DHF/DSS [6]. The World Health Organization (WHO) has included liver injury as one of the major disease criteria for severe forms of DENV infection [7]. Immunocompetent and immunocompromised mouse models, to study DENV pathogenesis and antiviral strategies, have been reviewed [8,9,10]. In AG129 mice (deficient in the interferon-α/β and -γ receptors), DENV infection resulted in high viral loads in the organs, and led to systemic diseases including liver injury and vascular leakage [11]. In another study, a higher dosage of DENV infection in the AG129 mice resulted in disease pathogenesis, and also resulted in a high mortality rate [12]. However, in immunocompetent mice, the typical signs of liver injury were observed and correlated with elevated liver transaminases [13,14,15,16]. Hepatocyte apoptosis has also been reported in severe dengue cases [17,18], and was significantly observed in the immunocompetent mouse model of DENV infection [19]. Using this animal model, the vital role of mitogen-activated protein kinase (MAPK) signaling in the modulation of DENV-induced apoptosis leading to liver injury was revealed [19]. Our previous studies found that the inhibitors of MAPKs were unable to restrict DENV production, but they improved liver injury by improving host responses, including cellular apoptotic events [20,21,22].
Crocetin is a natural compound that is obtained mainly from the crocus plant (Crocus sativus L.) and Gardenia jasminoides. The anti-inflammatory and immunomodulatory properties of crocetin were comprehensively examined in various diseases characterizing liver injury and apoptosis [23]. Crocetin was reported to protect against morphine (opioid analgesic)-induced liver toxicity in the mouse [24]. In an experimental fulminant hepatitis in rats, crocetin treatment was reported to reduce apoptosis, inflammation and oxidative stress responses [25]. Crocetin was also reported to improve post-hemorrhagic shock in patients [26]. In both in vitro and in vivo models of various disease conditions, the pharmacokinetic properties of crocetin were reviewed; however, its effects on DENV infection have not been studied. Accordingly, the present study aimed to investigate the efficacy of crocetin for the treatment of DENV-induced liver injury in a mouse model, and to identify its possible mechanism(s) of action.

The animal experiment protocol was approved by the Siriraj Animal Care and Use Committee (SI-ACUP 019/2555; dated 22 April 2014) under the ethical principles and guidelines of the National Research Council (NRC) of Thailand. Male 8-week-old BALB/c mice were purchased from the National Laboratory Animal Centre (NLAC), Mahidol University, Nakhon Pathom, Thailand. The mice were acclimated in pathogen-free conditions at the laboratory animal facility of the Faculty of Medicine Siriraj Hospital, Mahidol University, Bangkok, Thailand. Intravenous infection with 4 × 105 focus-forming units (FFU) of DENV-2 (strain-16681) via the lateral tail vein was performed. Treatment with crocetin (MP Biomedicals, CA, USA) at a dose of 50 mg/kg was administered via the same route at 1 h before, and 1 h and 24 h after, DENV infection. Other groups of mice that were mock-infected or infected with DENV-2 were treated with 2% dimethyl sulfoxide (DMSO) and used as control groups. Blood samples were collected on the third and seventh days after DENV infection for the hematology analysis and serum preparation. The blood sample collection on day 7 was taken just before the sacrifice. All study mice were euthanized with an intraperitoneal injection of sodium pentobarbital. The liver tissue sample from the experimental mice was harvested, sectioned and immediately stored in RNA later solution (Invitrogen, CA, USA) as per the manufacturer’s protocol.

Liver tissues that were harvested from study mice were fixed in 10 formalin in PBS. The liver tissues were thoroughly washed and paraffin-embedded. The paraffin-embedded blocks were sectioned and mounted on a glass slide for hematoxylin and eosin (H&E) staining. Results were obtained from 6 mice/group and the data was presented as a representative from each group.

DENV-NS1 viral RNA was quantified from the liver tissue using a previously reported protocol [22]. Briefly, the total RNA from the liver tissue homogenates was prepared using a ZR Viral RNA Kit (Zymo Research, USA) and Invitrap Spin Universal RNA Mini Kit (Stratec Molecular, Birkenfeld, Germany), respectively. An in vitro transcription-derived DENV-NS1 RNA with known copies was 10-fold serially diluted (standard) and the samples prepared from the liver homogenates simultaneously underwent qRT-PCR in a Roche LightCycler 480 Instrument (Roche Applied Science, Penzberg, Germany). The Ct values of the serially diluted standard were used to plot a standard curve and were compared with the test samples. The Ct values were analyzed for determining the DENV NS1 copies in the test samples. Data were obtained from 8 mice/group. Results were represented as virus copies/µg of total RNA obtained.

FFU assay was performed to count the viral titers in the livers of the study mice, as previously described [22]. Briefly, liver tissue samples were homogenized in Roswell Park Memorial Institute (RPMI) Medium and centrifuged at 14,000 revolutions per minute (RPM) for 12 min to obtain a clear supernatant. The obtained supernatant was filter-sterilized and used to determine the viral titer by FFU assay. Data were obtained from 6 mice/group and presented as FFU/mg of the liver tissue sample.

The enzyme activity of superoxide dismutase (SOD) and catalase (CAT) was evaluated using commercial kits purchased from Abcam (Cambridge, UK) (ab65354 and ab83464, respectively). Liver homogenates were prepared from at least 6 mice/group, in a lysis buffer, and centrifuged at 14,000× g for 5 min at 4 °C to obtain a supernatant. The experiments were performed with the obtained supernatant according to the manufacturer’s instructions. The absorbance of the SOD and CAT reaction mixtures was read at 450 nm and 570 nm, respectively, using a Synergy™ microplate reader (Bio-tek Instruments, Inc., Winooski, VT, USA).

RNA was prepared from the livers of study mice and quantified using a Nanodrop spectrophotometer (Thermo Fisher Scientific, Waltham, MA, USA). Equivalent concentrations of RNA samples were prepared and converted to cDNA. The obtained cDNA was mixed with LightCycler® 480 SYBR Green Mastermix (Invitrogen, CA, USA) and the primer set for the individual gene of interest. The primer blast program was used for customized oligo designs that were used in the current study and the designs are shown in Table 1. RT-PCR reactions were performed in a Roche LightCycler 480 Instrument (Roche Applied Science, Rotkreuz, Switzerland), and the obtained Ct values were normalized to the Ct value of glyceraldehyde-3-phosphate dehydrogenase (GAPDH)—the housekeeping gene control. The results were further analyzed by the 2–Ct method and the results of that analysis represent data from at least 6 mice/group.

2.9. Cytosolic and Nuclear Fractionation of Proteins from Liver Tissues

Liver tissue samples were homogenized and fractionated to cytosolic and nuclear fractions using a Subcellular Protein Fractionation Kit for Tissues (Thermo Fisher Scientific, Waltham, MA, USA). Samples from 6 mice/group were used in the experiments. Briefly, the stored frozen tissues were thawed and homogenized in protease inhibitor-containing buffers. The cytoplasmic and nuclear fractions were separately collected by centrifugation according to the manufacturer’s instructions. The concentration of the cytoplasmic and nuclear protein fractions obtained were estimated and stored at −70 °C.

3.1. Crocetin Did not Reduce Dengue Virus Production in the Liver of DENV-Infected Mice

The effect of crocetin treatment in the liver of DENV-infected mice was analyzed using an in vitro transcription derived from viral NS1 copies with known copy numbers. A standard curve was plotted using the Ct values obtained from the 10-fold dilutions of known NS1 copies used in the assay. The Ct values of the liver samples were compared with the standard curve to obtain the exact number of viral NS1 copies. In the liver, we did not find any significant differences in the copy numbers between the DENV-infected control mice and the DENV-infected mice that were treated with crocetin (Figure 1A). Further, to confirm the viral quantification in the liver, an FFU assay was conducted with the liver tissue homogenates. The results obtained from the FFU assay (Figure 1B) also supported the viral NS1 quantification, as no reduction in the viral titer was observed.
Similar observations were seen in the serum samples on day 3 and day 7, as there was no significant reduction in the viral titer between the control and crocetin treated group (Figure 1C,D). The virus titer in the serum samples was found to be much higher on day 3 (Figure 1C); however, the viremia in the serum samples was subsequently reduced on day 7 (Figure 1D).

White blood cell (WBC) and platelet (PLT) counts were found to be decreased in DENV-infected mice (Figure 2A,B), which suggests that DENV infection in mice causes leucopenia and thrombocytopenia. Crocetin treatment at a dosage of 50 mg/kg improved these DENV-associated clinical indications in mice (Figure 2A,B), which suggests the efficacy of crocetin for modulating DENV-induced leucopenia and thrombocytopenia in mice.

3.4. Crocetin Reduced Apoptosis in the Livers of DENV-Infected Mice

3.5. Crocetin Balanced Antioxidant Enzymes in the Livers of DENV-Infected Mice

Reduced enzyme activities of both SOD (Figure 5A) and CAT (Figure 5B) were observed in the livers of DENV-infected mice; however, crocetin treatment reversed these enzyme activities (Figure 5A,B) to maintain the redox status in mice. The expression of glutathione peroxidase 1/2 (Gpx 1/2) was found to be reduced in the livers of DENV-infected mice, and this decreased expression was induced by crocetin treatment (Figure 5C,D). These findings demonstrate that immunocompetent mice infected with DENV by intravenous injection exhibited liver injury with reduced activities of antioxidant enzymes, including SOD, CAT and Gpx 1/2. Our findings further suggest the efficacy of crocetin in modulating antioxidant status in DENV-infected mice.

3.6. Crocetin Modulated HO-1 and COX-2 Expression in the Livers of DENV-Infected Mice

3.7. Crocetin Reduced Phosphorylated JNK and p38 in the Livers of DENV-Infected Mice

Liver tissues were homogenized to prepare the protein samples that were used to determine the effect of crocetin on the phosphorylation of JNK1/2 and p38 MAPK. The phosphorylated forms of both JNK1/2 (Figure 7A,B) and p38 (Figure 7C,D) were significantly elevated in the liver protein samples of DENV-infected mice; however, these phosphorylation events were observed to be reduced upon crocetin treatment (Figure 7A–D). These results suggest the efficacy of crocetin for modulating MAPK signaling in the livers of DENV-infected mice.

3.8. Crocetin Reduced Nuclear Localization of NF-kB in the Livers of DENV-Infected Mice

This study was supported by a Mahidol University Post-Doctoral Fellowship Grant (grant no. R016120002) to G.P.S.; a Siriraj Research and Development Grant to T.L. (grant no. R016134005), and a grant from the Thailand Research Fund (IRG5980006). P.-t.Y. and T.L. were also supported by a Siriraj Chalermphrakiat Grant from the Faculty of Medicine Siriraj Hospital, Mahidol University.

The authors gratefully acknowledge Aunchalee Sirimontapon and Liji Sreelatha for technical support, and Kevin Jones for critical editing of the manuscript. 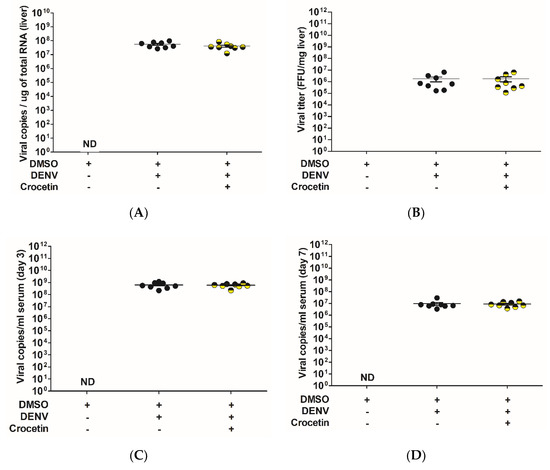 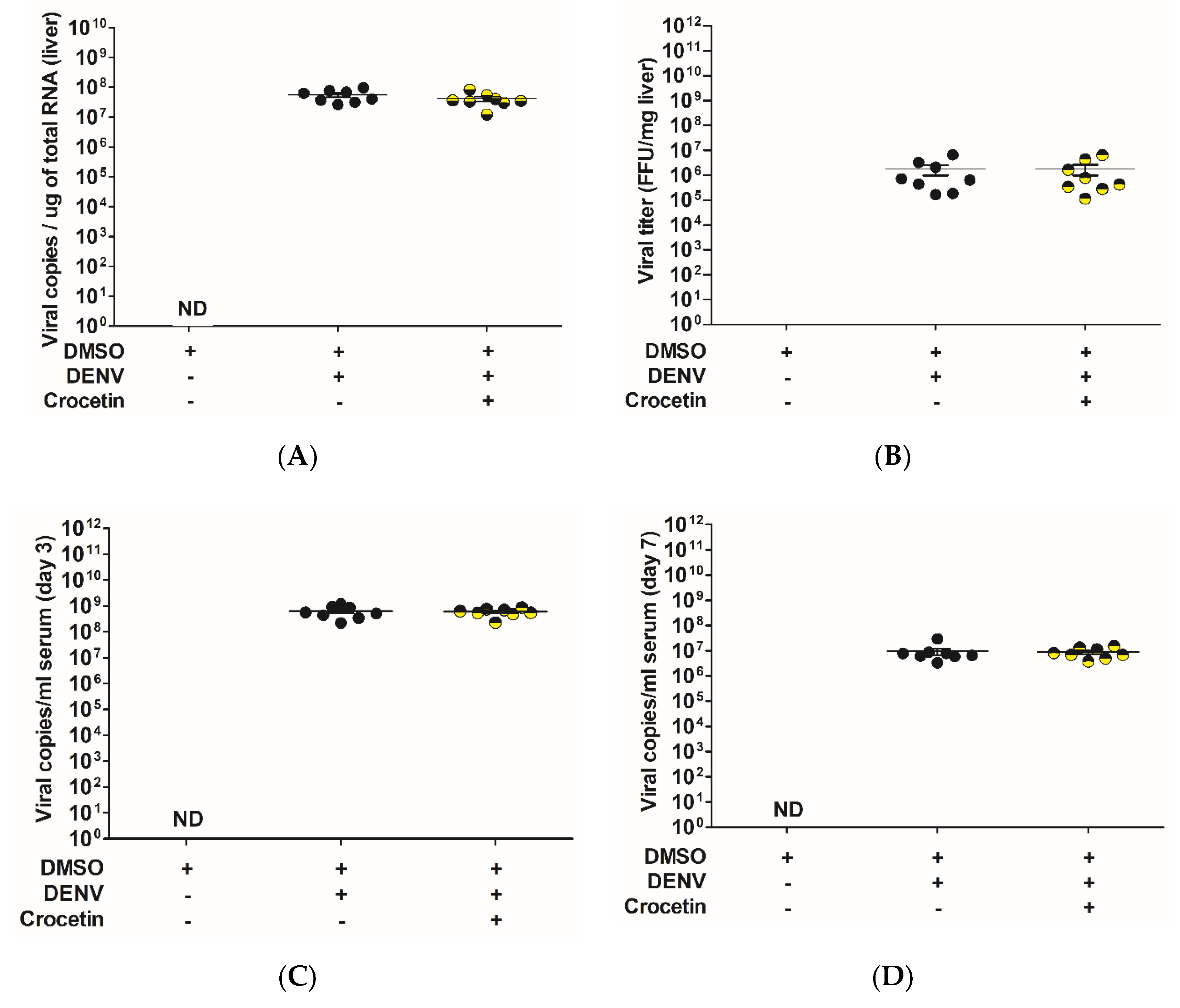 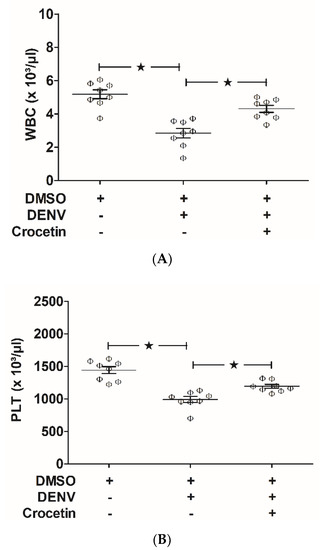 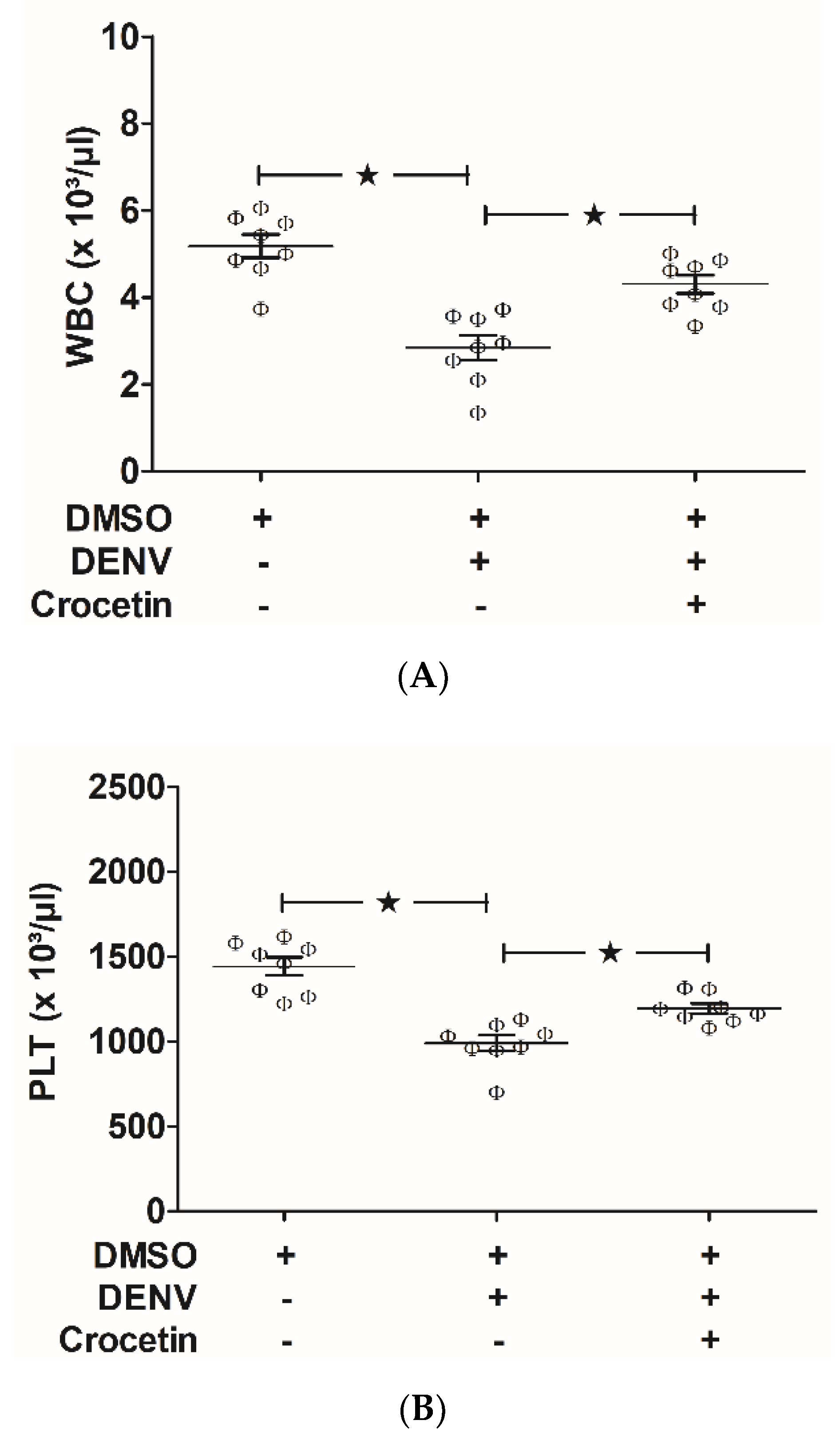 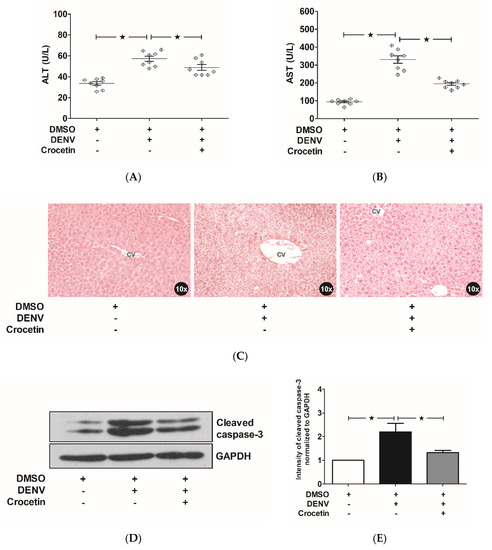 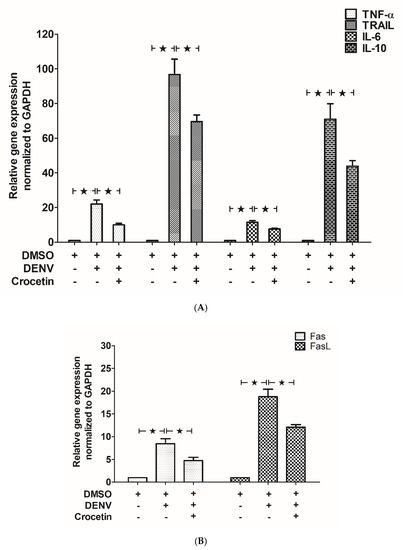 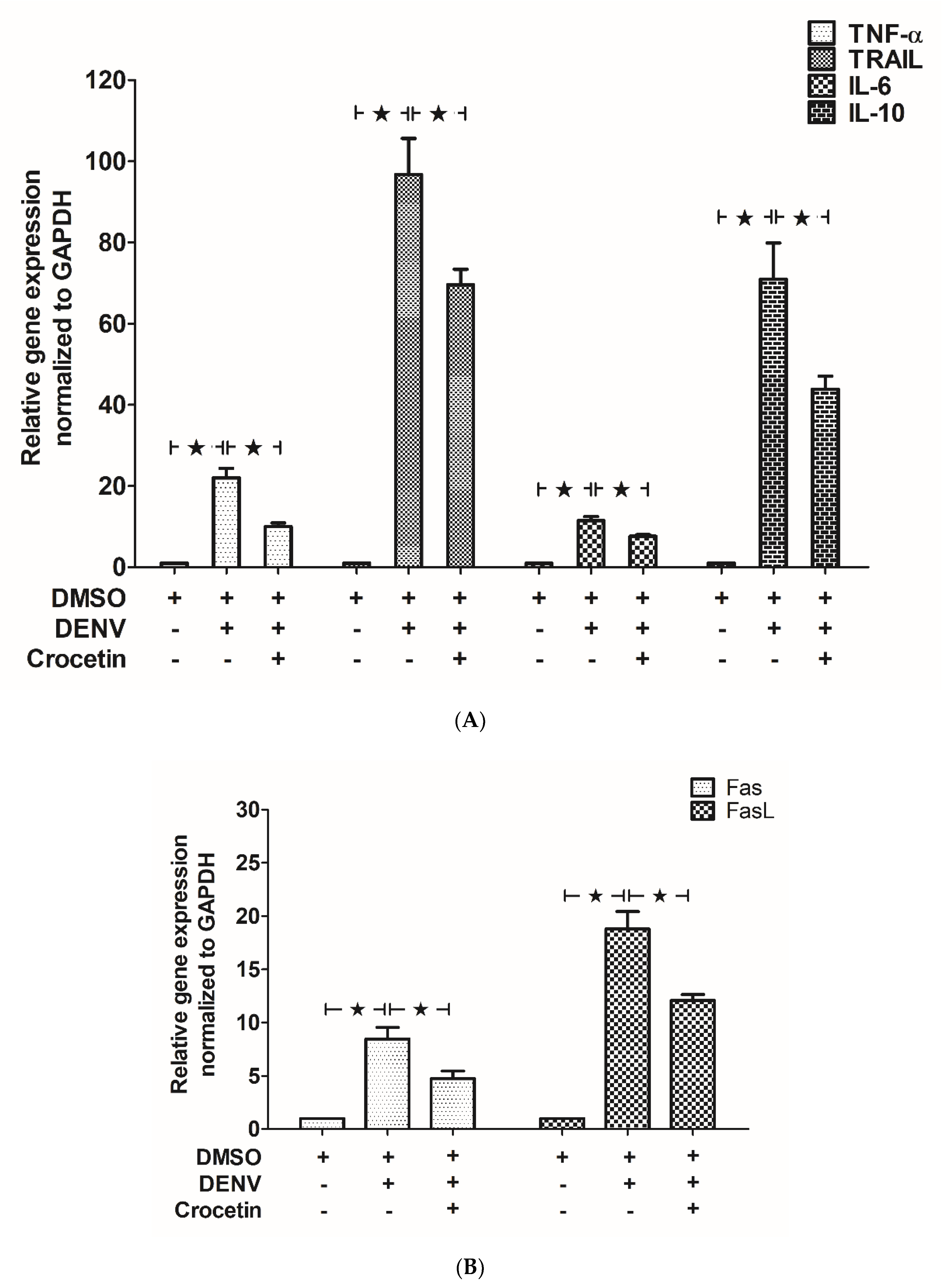 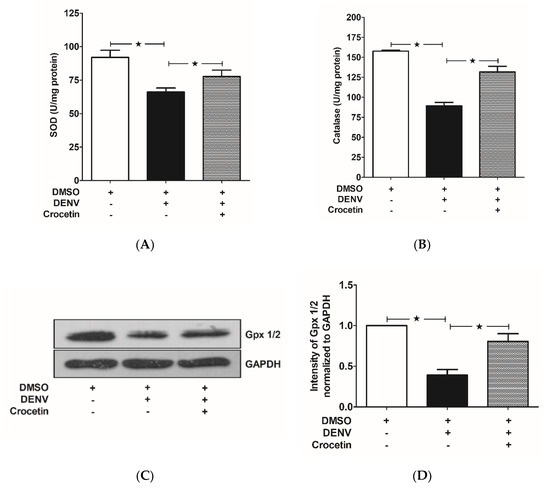 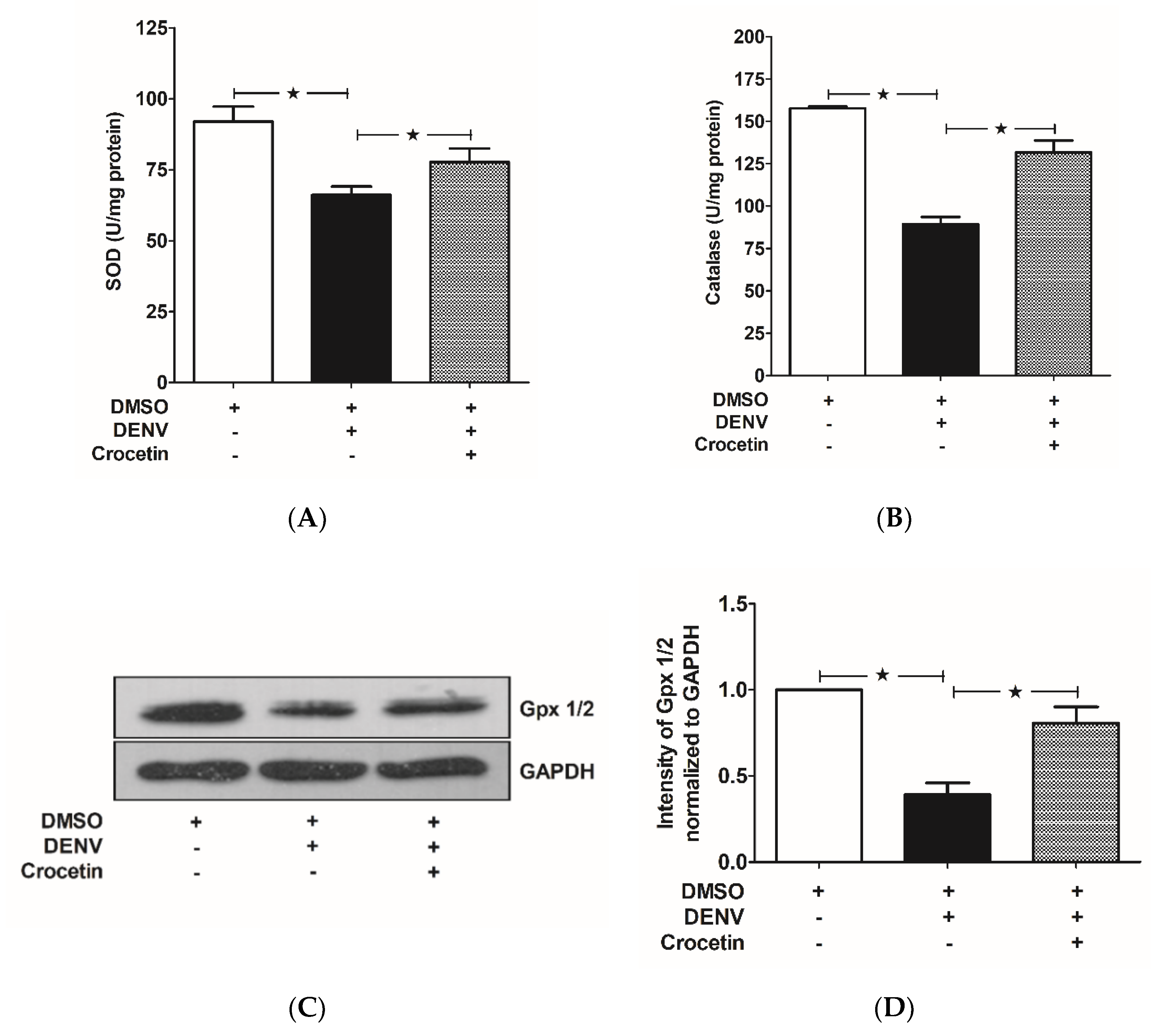 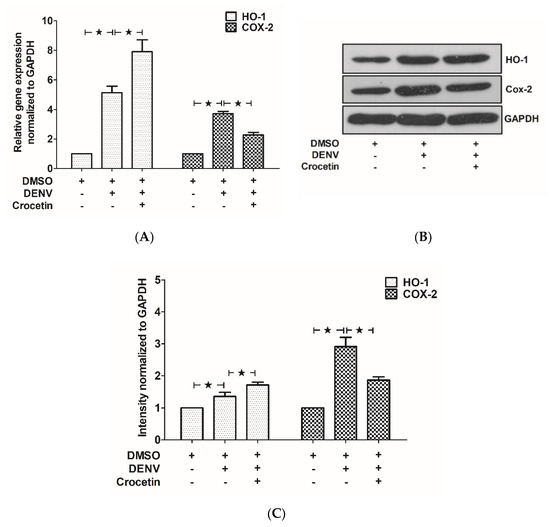 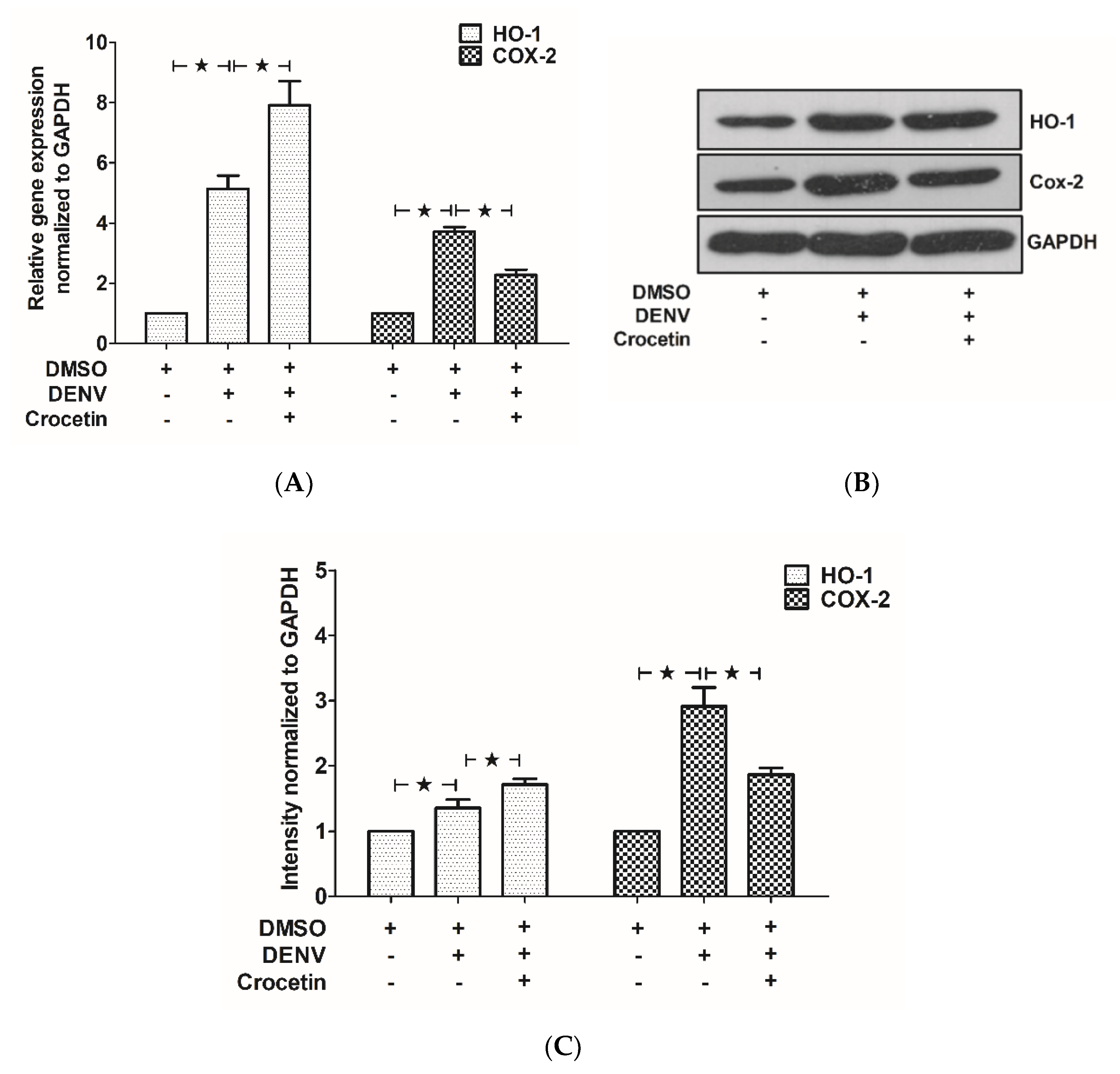 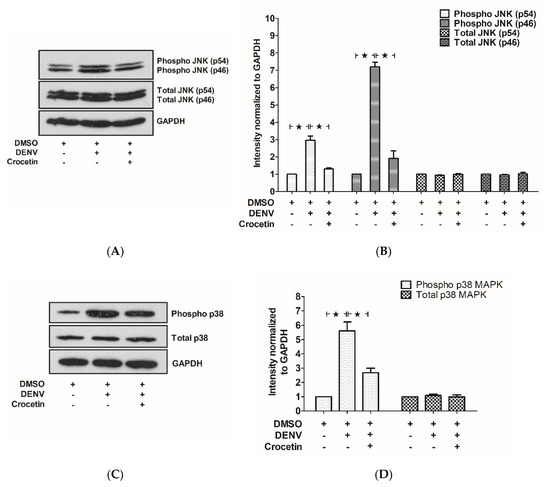 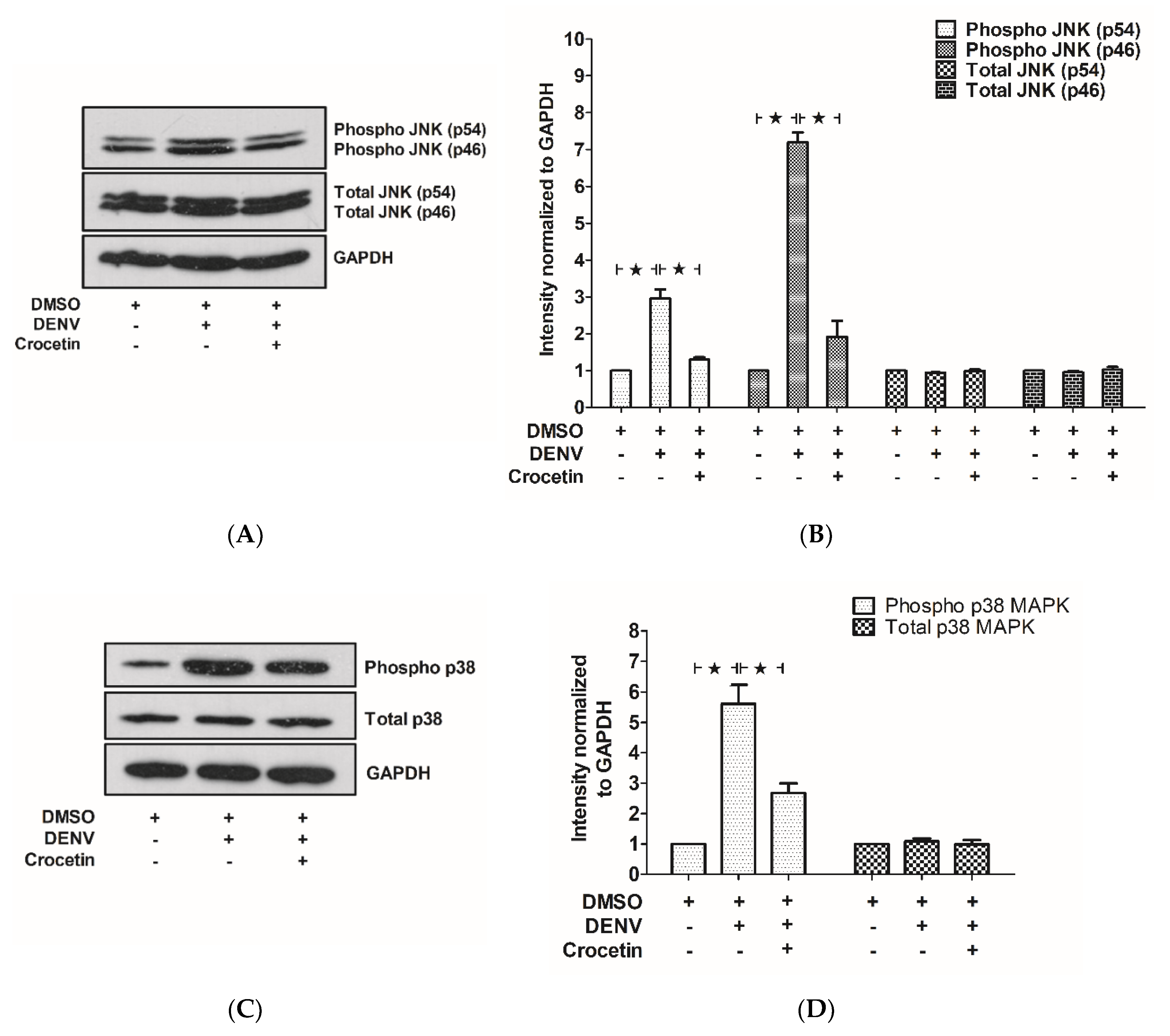 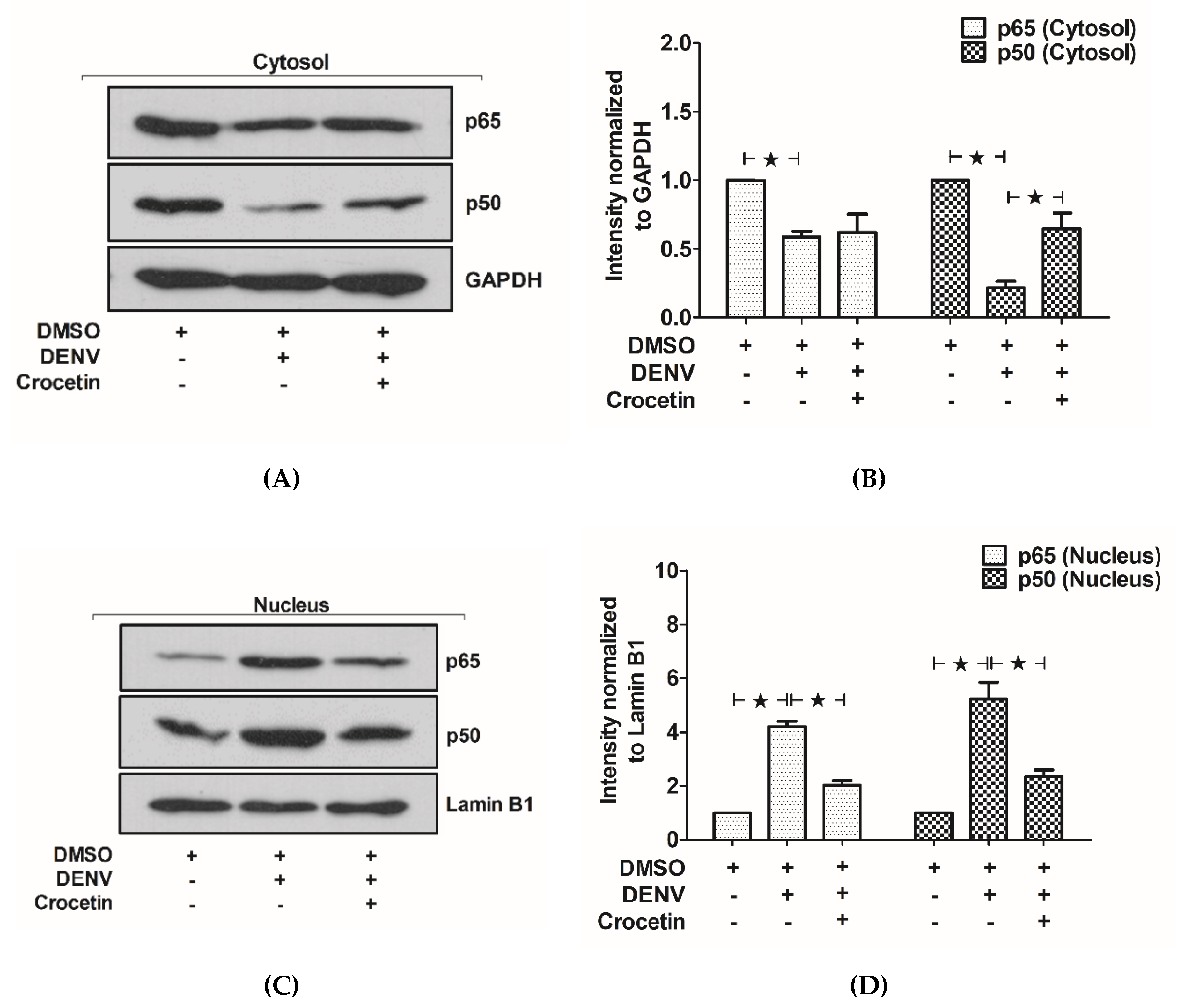 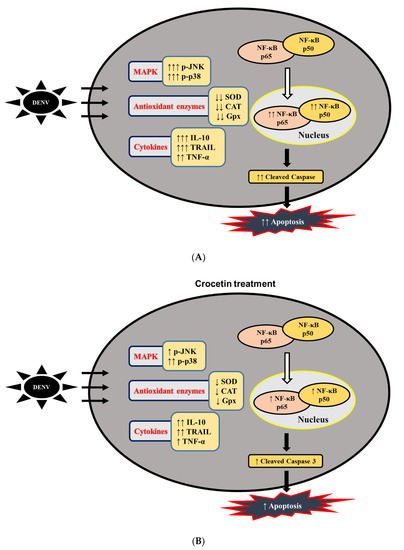 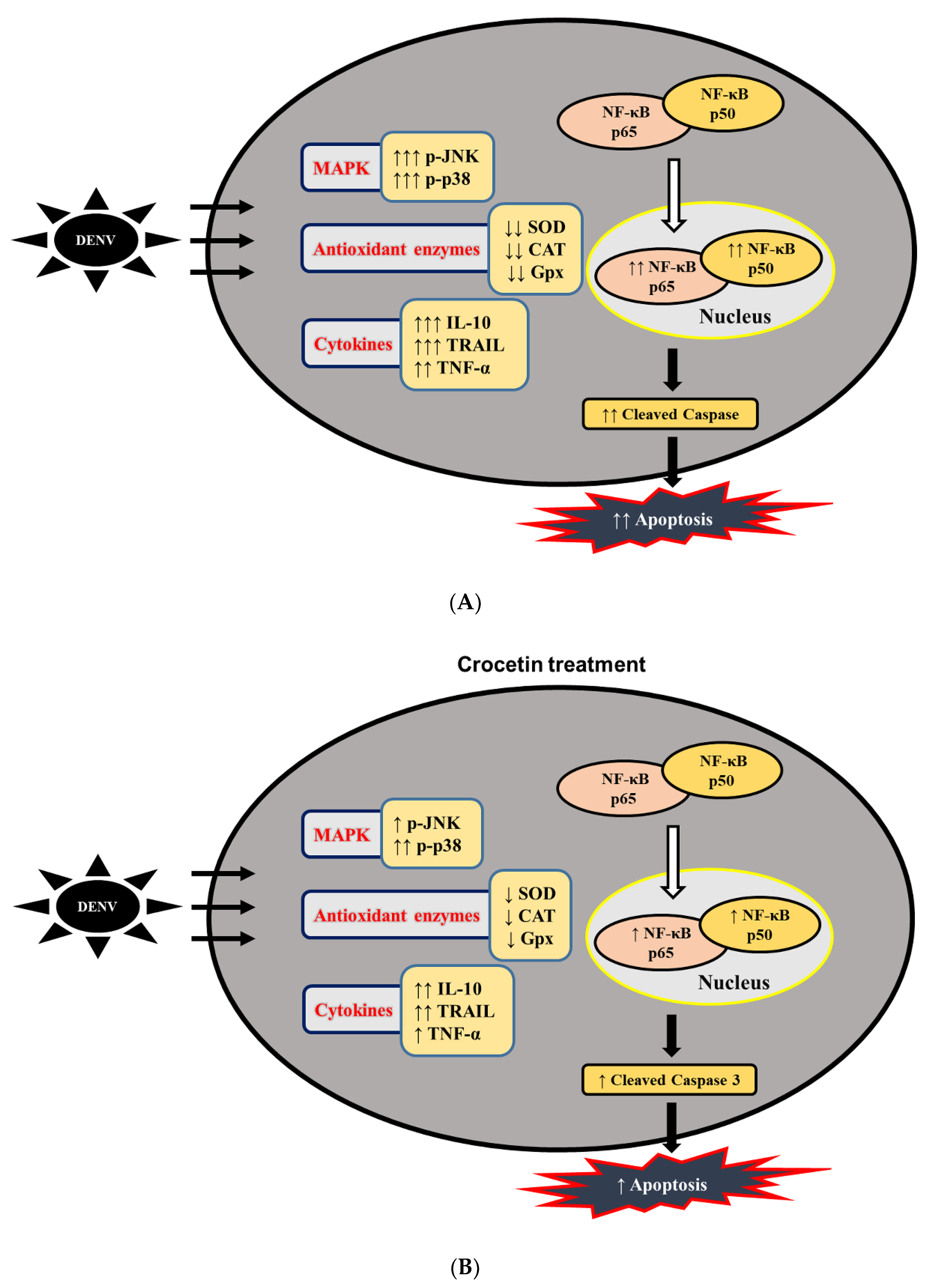