Infection with Lumpy Skin Disease virus (LSDV), as well as infections with other Capripox virus species, are described as the most severe pox diseases of production animals and are therefore listed as notifiable diseases under the guidelines of the World Organization for Animal Health (OIE). To our knowledge there is only a single study examining dose dependency, clinical course, viremia, virus shedding, as well as serological response following experimental LSDV “Neethling” inoculation. Here, we inoculated cattle with four different doses of LSDV strain “Macedonia2016”, a recently characterized virulent LSDV field strain, and examined clinical symptoms, viremia, viral shedding, and seroconversion. Interestingly, around 400 cell culture infectious dose50 (CCID50) of LSDV-“Macedonia2016” were sufficient to induce generalized Lumpy Skin Disease (LSD) in two out of six cattle but with a different incubation time, whereas the other animals of this group showed only a mild course of LSD. However, differences in incubation time, viral loads, serology, and in the clinical scoring could not be observed in the other three groups. In summary, we concluded that experimental LSDV infection of cattle with an infectious virus titer of 105 to 106 CCID50/mL of “Macedonia2016” provides a robust and sufficient challenge model for future studies. View Full-Text
Keywords: Capripox; Lumpy Skin Disease; LSDV; minimum infective dose; experimental inoculation; field strain; challenge model Capripox; Lumpy Skin Disease; LSDV; minimum infective dose; experimental inoculation; field strain; challenge model
►▼ Show Figures 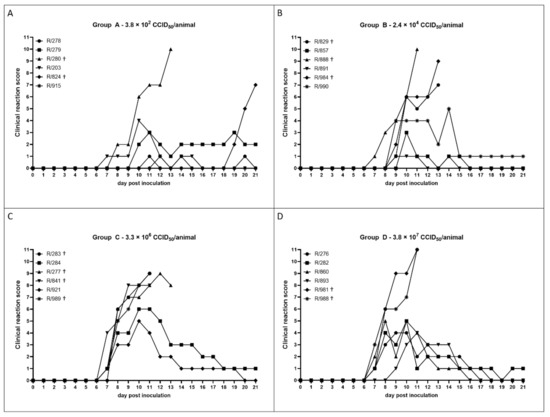