An Assessment of Secondary Clinical Disease, Milk Production and Quality, and the Impact on Reproduction in Holstein Heifers and Cows from a Single Large Commercial Herd Persistently Infected with Bovine Viral Diarrhea Virus Type 2
Previous Article in Journal

Since deer were introduced into Australia in the mid-1800s, their wild populations have increased in size and distribution, posing a potential risk to the livestock industry, through their role in pathogen transmission cycles. In comparison to livestock, there are limited data on viral infections in all wildlife, including deer. The aim of this study was to assess blood samples from wild Australian deer for serological evidence of exposure to relevant viral livestock diseases. Blood samples collected across eastern Australia were tested by ELISA to detect antigens and antibodies against Pestivirus and antibodies against bovine herpesvirus 1. A subset of samples was also assessed by RT-PCR for Pestivirus, Simbu serogroup, epizootic hemorrhagic disease virus and bovine ephemeral fever virus. Our findings demonstrated a very low seroprevalence (3%) for ruminant Pestivirus, and none of the other viruses tested were detected. These results suggest that wild deer may currently be an incidental spill-over host (rather than a reservoir host) for Pestivirus. However, deer could be a future source of viral infections for domestic animals in Australia. Further investigations are needed to monitor pathogen activity and quantify possible future infectious disease impacts of wild deer on the Australian livestock industry. View Full-Text
Keywords: Australia; deer; prevalence; Pestivirus; ruminants; serosurveillance; virology; wildlife disease Australia; deer; prevalence; Pestivirus; ruminants; serosurveillance; virology; wildlife disease
►▼ Show Figures 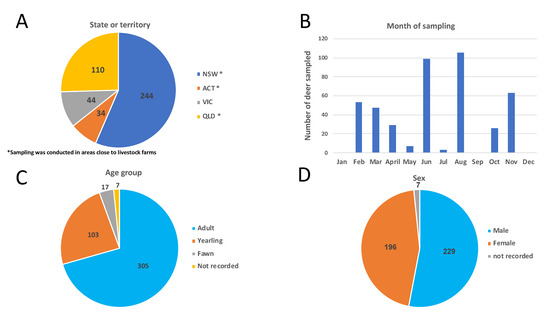