A High-Throughput HIV-1 Drug Screening Platform, Based on Lentiviral Vectors and Compatible with Biosafety Level-1
Previous Article in Journal

Differences in HIV Markers between Infected Individuals Treated with Different ART Regimens: Implications for the Persistence of Viral Reservoirs

Even with an efficient combination of antiretroviral therapy (ART), which significantly decreases viral load in human immunodeficiency virus type 1 (HIV-1)-positive individuals, the occurrence of HIV-1-associated neurocognitive disorders (HAND) still exists. Microglia have been shown to have a significant role in HIV-1 replication in the brain and in subsequent HAND pathogenesis. However, due to the limited ability of ART drugs to cross the blood–brain barrier (BBB) after systemic administration, in addition to efflux transporter expression on microglia, the efficacy of ART drugs for viral suppression in microglia is suboptimal. Previously, we developed novel poly (lactic-co-glycolic acid) (PLGA)-based elvitegravir nanoparticles (PLGA-EVG NPs), which showed improved BBB penetration in vitro and improved viral suppression in HIV-1-infected primary macrophages, after crossing an in vitro BBB model. Our objective in the current study was to evaluate the efficacy of our PLGA-EVG NPs in an important central nervous system (CNS) HIV-1 reservoir, i.e., microglia. In this study, we evaluated the cyto-compatibility of the PLGA-EVG NPs in microglia, using an XTT (2,3-bis-(2-methoxy-4-nitro-5-sulfophenyl)-2H-tetrazolium-5-carboxanilide) assay and cellular morphology observation. We also studied the endocytosis pathway and the subcellular localization of PLGA NPs in microglia, using various endocytosis inhibitors and subcellular localization markers. We determined the ability of PLGA-EVG NPs to suppress HIV-1 replication in microglia, after crossing an in vitro BBB model. We also studied the drug levels in mouse plasma and brain tissue, using immunodeficient NOD scid gamma (NSG) mice, and performed a pilot study, to evaluate the efficacy of PLGA-EVG NPs on viral suppression in the CNS, using an HIV-1 encephalitic (HIVE) mouse model. From our results, the PLGA-EVG NPs showed ~100% biocompatibility with microglia, as compared to control cells. The internalization of PLGA NPs in microglia occurred through caveolae-/clathrin-mediated endocytosis. PLGA NPs can also escape from endo-lysosomal compartments and deliver the therapeutics to cells efficiently. More importantly, the PLGA-EVG NPs were able to show ~25% more viral suppression in HIV-1-infected human-monocyte-derived microglia-like cells after crossing the in vitro BBB compared to the EVG native drug, without altering BBB integrity. PLGA-EVG NPs also showed a ~two-fold higher level in mouse brain and a trend of decreasing CNS HIV-1 viral load in HIV-1-infected mice. Overall, these results help us to create a safe and efficient drug delivery method to target HIV-1 reservoirs in the CNS, for potential clinical use. View Full-Text
Keywords: HIV; antiretroviral therapy; elvitegravir; nanomedicine; microglia HIV; antiretroviral therapy; elvitegravir; nanomedicine; microglia
►▼ Show Figures 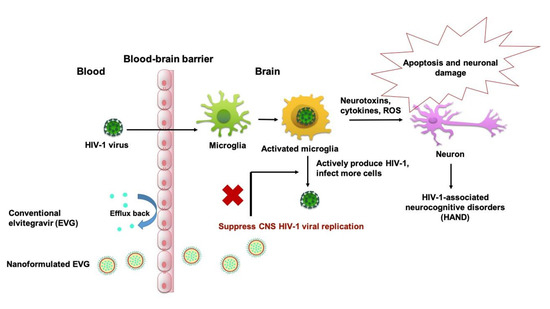