Viruses are among the most abundant and diverse biological components in the marine environment. In finfish, viruses are key drivers of host diversity and population dynamics, and therefore, their effect on the marine environment is far-reaching. Viral encephalopathy and retinopathy (VER) is a disease caused by the marine nervous necrosis virus (NNV), which is recognized as one of the main infectious threats for marine aquaculture worldwide. For over 140 years, the Suez Canal has acted as a conduit for the invasion of Red Sea marine species into the Mediterranean Sea. In 2016–2017, we evaluated the prevalence of NNV in two indigenous Mediterranean species, the round sardinella (Sardinella aurita) and the white steenbras (Lithognathus mormyrus) versus two Lessepsian species, the Randall’s threadfin bream (Nemipterus randalli) and the Lessepsian lizardfish (Saurida lessepsianus). A molecular method was used to detect NNV in all four fish species tested. In N. randalli, a relatively newly established invasive species in the Mediterranean Sea, the prevalence was significantly higher than in both indigenous species. In S. lessepsianus, prevalence varied considerably between years. While the factors that influence the effective establishment of invasive species are poorly understood, we suggest that the susceptibility of a given invasive fish species to locally acquired viral pathogens such as NVV may be important, in terms of both its successful establishment in its newly adopted environment and its role as a reservoir ‘host’ in the new area.
Keywords: viral diseases; fish; nervous necrosis virus (NNV); Lessepsian species; indigenous species; Mediterranean Sea viral diseases; fish; nervous necrosis virus (NNV); Lessepsian species; indigenous species; Mediterranean Sea

Marine organisms typically host diverse communities of viruses, bacteria, archaea, and fungi [1,2,3]. Marine viruses are key drivers of host diversity, population dynamics, and biogeochemical cycles, and, therefore, their effect on the marine environment is extensive [2,4]. Viral encephalopathy and retinopathy (VER) is a disease caused by nervous necrosis virus (NNV), an RNA virus belonging to the genus Betanodavirus (Nodaviridae). NNV is globally distributed and has been detected in 177 susceptible marine species, while epizootic outbreaks have been reported in 62 of them [5]. The disease has caused ecological and economical losses worldwide in a variety of reared marine fish species, but also in freshwater species worldwide [5,6,7,8]. The opening of the Suez Canal in 1869 is considered an important event in many respects, especially from the biogeographical perspective. In particular, it facilitated marine faunal invasions from the Red Sea, inducing dramatic changes in the eastern Mediterranean coastal ecosystems [7]. This influx of invasive species into the Mediterranean Sea, termed “Lessepsian migration”, has hitherto been well documented [8,9]. Among all taxa, due to their ecological and commercial importance, invasive fish species have been the most extensively studied, considering their well-elucidated and documented taxonomy [10,11]. The success of a nonindigenous species in a new habitat is often explained by the “enemy release hypothesis”. According to this theory, during the process of biological invasion, nonindigenous species are released from the effects of the natural enemies (for example competitors, predators, and pathogens) which control their population in their native region. The idea that exotic species may leave their natural enemies behind has a long history [12,13], and it has been suggested that the release from pathogens may have great relevance to this phenomenon [14,15,16,17]. Pathogens can directly affect their hosts by reducing growth, curbing reproduction rates, and diminishing survival, or indirectly, by influencing behaviors and competition [18]. Thus, like most natural enemies, pathogens can regulate their host populations in a density-dependent way [19,20].
The genome of NNV consists of two segments, RNA1 (3.1 Kb) and RNA2 (1.4 Kb), which code for the RNA-dependent RNA polymerase and the coat protein. Based on a phylogenetic analysis of the T4 variable region within the RNA2 segment, Betanodaviruses have been clustered into four genotypes, currently accepted by the International Committee on Taxonomy of Viruses (ICTV) as official species of this genus: striped jack nervous necrosis virus (SJNNV), tiger puffer nervous necrosis virus (TPNNV), barfin flounder nervous necrosis virus (BFNNV), and red-spotted grouper nervous necrosis virus (RGNNV) [5].
In our previous study [21], NNV was found in wild and cultured fish and crustaceans from the eastern part of the Mediterranean Sea. While NNV prevalence levels varied among different fish species, initial findings indicated a relatively high prevalence in Lessepsian fish species compared to Mediterranean indigenous species. Following this preliminary survey, the prevalence of NNV has been studied over an additional one year period and compared to our previous results [21]. Four fish species were studied: two indigenous species, the round sardinella (Sardinella aurita) and the white steenbras (Lithognathus mormyrus), and two Lessepsian species, Randall’s bream (Nemipterus randalli) and lizardfish (Saurida lessepsianus). These four species were selected due to their ecological and economic importance as major species in the eastern Mediterranean fisheries. In addition, NNV detected in various species was genetically characterized.

In October–December 2017, a total of 109 specimens of four wild fish species: L. mormyrus (n = 20), S. aurita (n = 28), N. randalli (n = 31), and S. lessepsianus (n = 30) were caught and brought on ice to the laboratory. All specimens were caught along the Israeli Mediterranean shoreline by bottom trawling during the annual national monitoring project conducted in November 2017 by the Israel Oceanographic and Limnological Research Institute (IOLR) and during the surveys conducted between October to December 2017 by the Fisheries and Aquaculture Department of the Israel Ministry of Agriculture. Weight and Total Length measurements were taken, and visual inspections were carried out. All specimens were aseptically dissected and brain tissue samples were collected according to fish necropsy protocol [22]. All samples were kept frozen at −80 °C until further analysis.

Total RNA from brain tissue was extracted by using the EZ-RNA total RNA isolation kit (Biological Industries) according to the manufacturer’s instructions. The RNA concentration and quality were estimated using NanoDrop One (Thermo Scientific), and the extracted RNA was stored at −80 °C until use. Real-time Reverse Transcription PCR (RT-PCR) was performed to generate cDNA of total RNA using the GoScriptTM Reverse Transcription System (Promega, WI, USA) with random primers according to the manufacturer’s instructions.

PCR amplicons were purified by ExoSAP-IT (Affymetrix), followed by Sanger sequencing at the Macrogen Europe Laboratory (Macrogen Inc., The Netherlands/South Korea). Sequences were aligned using the MEGA7 software [25] and compared by BLAST to representative sequences available in GenBank. Sequences of NNV isolates from wild and farmed fish from the Mediterranean area, including two from the Israeli Mediterranean and Red Sea (only RNA2 sequences were available), were included in the phylogenetic analysis (Table 1). Genetic characterization of NNV positive isolates, based on RNA1 and RNA2, were inferred from maximum likelihood (ML) trees performed with the PhyML v.3.0 program [26] by applying the K80 + I model of nucleotide substitution for RNA1 and RNA2, based on the Smart Model Selection [27] available in the PhyML program. The robustness of the nodes on the phylogeny was assessed by 1000 bootstrap replicates using the ML substitution model defined above. Phylogenetic trees were visualized with the FigTree v1.4.3 software (http://tree.bio.ed.ac.uk/software/figtree/).

The statistical significance of the prevalence of NNV between various fish species was determined by the Chi-Square test of independence using IBM SPSS Statistics for Windows, version 20.0 (IBM Corp., Armonk, NY, USA). For all tests, a p-value < 0.05 was considered significant.

R.B., A.P.S., D.M., D.T. participated in tissues sampling and experimental design. R.B., D.M did the molecular identification and phylogenetic analysis. Y.L., D.M., A.D., N.S. and N.D. wrote most of the manuscript. All authors have read and agreed to the published version of the manuscript.

This study was financially supported by the Kahn Foundation. 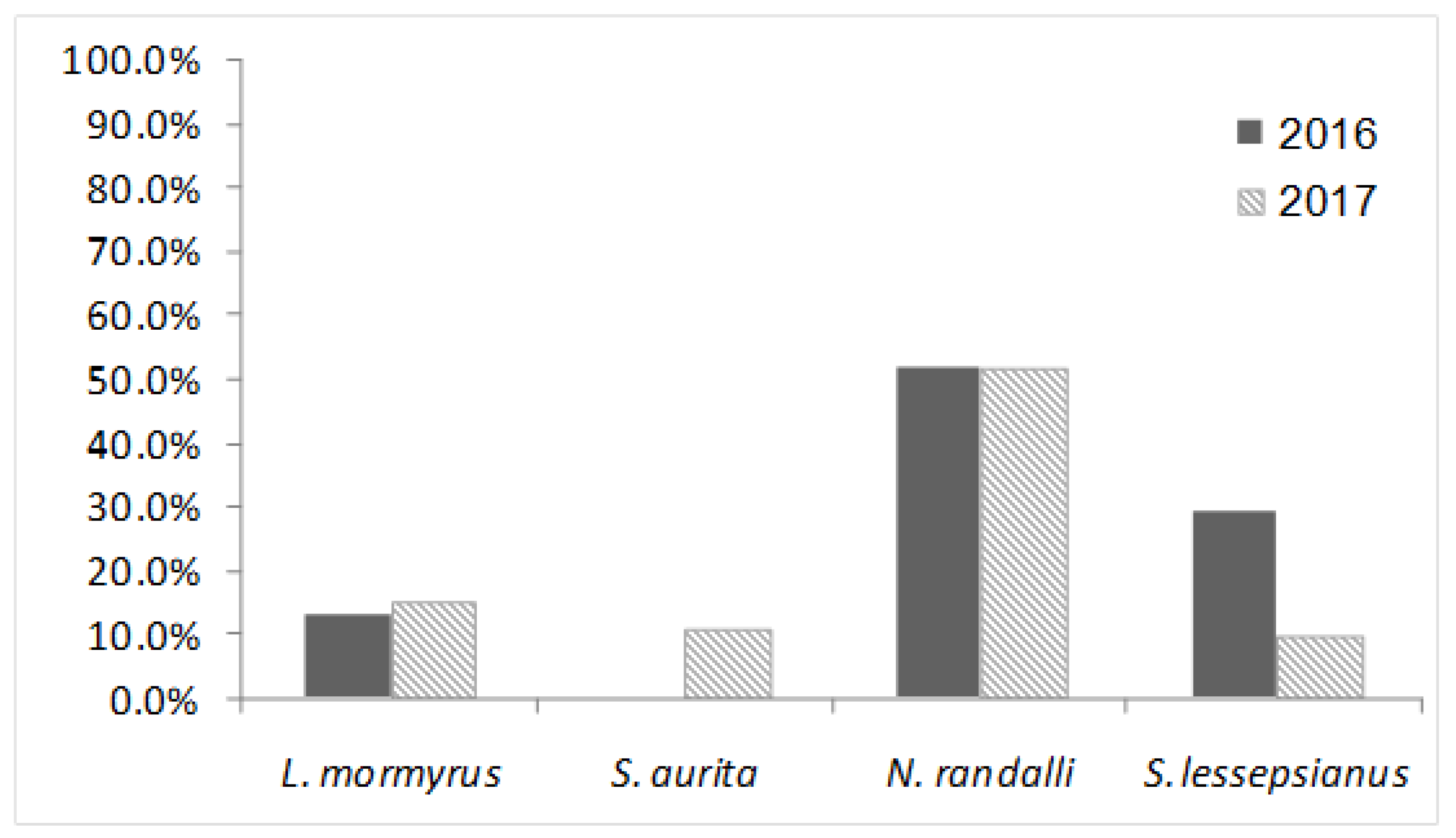 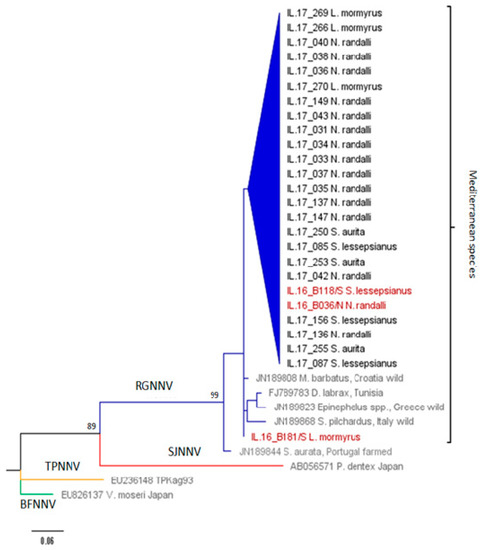 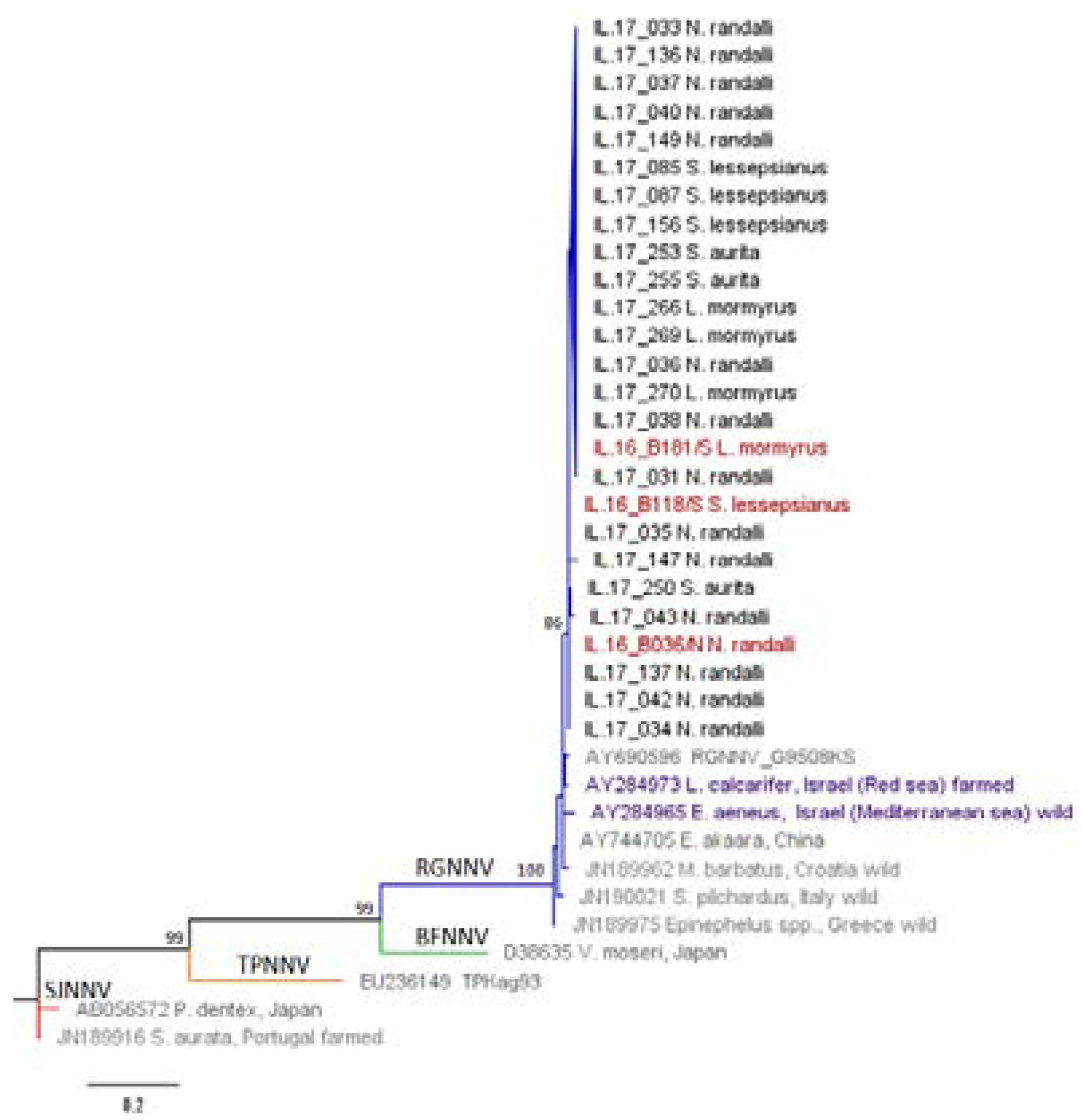