Epidemics of the Chikungunya virus (CHIKV) from 2004 onwards were caused by the East/Central/South African (ECSA) genotype. However, the pathogenesis of the genotype infection has not been fully explained. In this study, we examined the pathogenic potential of CHIKV ECSA genotype M-30 (M-30) by comparing it with that of African genotype S-27 (S-27) in mice. Following low titer infections in type-I IFN receptor KO (A129) mice, we found that the M-30 infection caused high and acute fatality compared with the S-27 infection. M-30-infected A129 mice showed higher viral loads in their central nervous systems and peripheral organs, and increased levels of IFN-γ responses in their brains. Interestingly, M-30-infected mice did not show the hypophagia and reductions in weight which were observed in S-27-infected mice. Our observations provide a novel explanation of the pathogenic mechanisms attributed to virus proliferation, anti-type-II IFN response and metabolic activity in the CHIKV ECSA virus in mice. View Full-Text
Keywords: CHIKV; ECSA; IFN-γ; mouse model; viral pathogenesis CHIKV; ECSA; IFN-γ; mouse model; viral pathogenesis
►▼ Show Figures 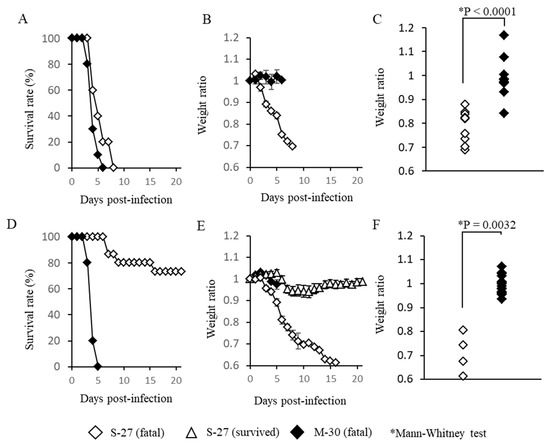