In this study, we characterized the role of host cell protein tyrosyl-DNA phosphodiesterase 2 (TDP2) activity, also known as VPg unlinkase, in picornavirus infections in a human cell model of infection. TDP2/VPg unlinkase is used by picornaviruses to remove the small polypeptide, VPg (Virus Protein genome-linked, the primer for viral RNA synthesis), from virus genomic RNA. We utilized a CRISPR/Cas-9-generated TDP2 knock out (KO) human retinal pigment epithelial-1 (hRPE-1) cell line, in addition to the wild type (WT) counterpart for our studies. We determined that in the absence of TDP2, virus growth kinetics for two enteroviruses (poliovirus and coxsackievirus B3) were delayed by about 2 h. Virus titers were reduced by ~2 log10 units for poliovirus and 0.5 log10 units for coxsackievirus at 4 hours post-infection (hpi), and by ~1 log10 unit at 6 hpi for poliovirus. However, virus titers were nearly indistinguishable from those of control cells by the end of the infectious cycle. We determined that this was not the result of an alternative source of VPg unlinkase activity being activated in the absence of TPD2 at late times of infection. Viral protein production in TDP2 KO cells was also substantially reduced at 4 hpi for poliovirus infection, consistent with the observed growth kinetics delay, but reached normal levels by 6 hpi. Interestingly, this result differs somewhat from what has been reported previously for the TDP2 KO mouse cell model, suggesting that either cell type or species-specific differences might be playing a role in the observed phenotype. We also determined that catalytically inactive TDP2 does not rescue the growth defect, confirming that TDP2 5′ phosphodiesterase activity is required for efficient virus replication. Importantly, we show for the first time that polysomes can assemble efficiently on VPg-linked RNA after the initial round of translation in a cell culture model, but both positive and negative strand RNA production is impaired in the absence of TDP2 at mid-times of infection, indicating that the presence of VPg on the viral RNA affects a step in the replication cycle downstream of translation (e.g., RNA synthesis). In agreement with this conclusion, we found that double-stranded RNA production (a marker of viral RNA synthesis) is delayed in TDP2 KO RPE-1 cells. Moreover, we show that premature encapsidation of nascent, VPg-linked RNA is not responsible for the observed virus growth defect. Our studies provide the first lines of evidence to suggest that either negative- or positive-strand RNA synthesis (or both) is a likely candidate for the step that requires the removal of VPg from the RNA for an enterovirus infection to proceed efficiently. View Full-Text
Keywords: VPg unlinkase; TDP2 (tyrosyl DNA phosphodiesterase 2); picornavirus; poliovirus; coxsackievirus; RNA replication; viral translation; retinal pigment epithelial cells (RPE cells); polysome analysis VPg unlinkase; TDP2 (tyrosyl DNA phosphodiesterase 2); picornavirus; poliovirus; coxsackievirus; RNA replication; viral translation; retinal pigment epithelial cells (RPE cells); polysome analysis
►▼ Show Figures 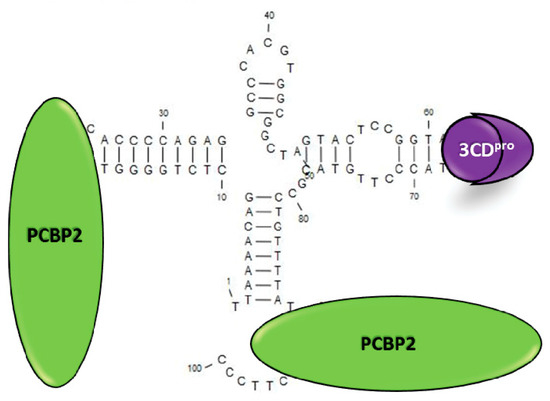