COVID-19 and School Activities in Italy

According to our current understanding, coronavirus SARS-CoV-2, which causes COVID-19 [1,2], is transmitted among humans via droplets from the respiratory tract. The high level of contagiousness of SARS-CoV-2 is probably related to a high virus load in human sputum on the one hand, and to the protective effect of proteins against virus material in the respiratory tract on the other. In a recent cell culture study, SARS-CoV-2 was isolated from the saliva of individuals over a period of two weeks after the onset of a symptomatic infection [3]. The study provides information about the excretion of the virus in the sputum and stool of severely ill, hospitalized patients. Further data from moderately ill patients, however, are important in terms of the length of time over which SARS-CoV-2 is excreted into the respiratory tract of these patients. Such data are important to know since most of the infections are mild, especially in young patients. Furthermore, little is known about the course of the immune response with regard to the various types of antibodies against SARS-CoV-2 proteins and their virus-neutralizing potential over a prolonged period of time.
Here, we report on the extent of SARS-CoV-2 RNA present in nasal and oro-pharyngeal fluid, as well as on the level of IgG and IgA antibodies against the S1-RBD-protein and the N-protein of SARS-CoV-2 in blood, and their ability to neutralize SARS-CoV-2 in vitro. The samples from three patients belonging to the same family were examined over a period of half a year, starting with the onset of the disease.

Experiments conformed to the Declaration of Helsinki Principles. Written, informed consents were obtained from all blood donors prior to the study. The study was approved by the Independent Research Ethics Committee (IEC) of the University of Tuebingen, IEC-Project Number 672/2020A.

The virus RNA was isolated from swab samples using a High Pure Viral Nucleic Acid Kit (Roche, Mannheim, Germany)) as follows: each swab was incubated for 10 min at 70 °C in 350 µL binding buffer, 50 µL proteinase K and 4 µL poly(A)-RNA. After the addition of 250 µL of phosphate-buffered saline, samples were mixed by vigorous vortexing, after which a 600 µL sample was processed according to the manufacturer’s specifications. Nucleic acids were eluted in 50 µL of elution buffer; 5 µL of the eluted sample was examined in a total RT-qPCR reaction volume of 20 µL, according to the manufacturer’s specifications, using LightCycler 480 (Roche) instrumentation. The detection of SARS-CoV-2 RNA was conducted by means of the SARS-CoV-2-realDETECT kit (Mediagnost GmbH, Reutlingen, Germany). Amplifications of the E gene and the human RNase-P control were carried out in multiplex RT-qPCR [4] reactions. A recombinant in vitro-transcribed RNA standard (4BLqSARS-CoV 2-RNA, CO301001, 4base lab AG, Reutlingen, Germany) encoding the SARS-CoV-2 primer and probe-binding sites described by Corman et al. [4] and the Centers for Disease Control and Prevention, USA [5] was applied for quantification.

2.3.2. Detection of IgA and IgG Antibodies against SARS-CoV-2-S1-RBD-Protein

IgG Antibody Assay: The ELISA test system E 111-IVD developed by Mediagnost GmbH, Reutlingen, Germany was employed according to the manufacturer’s instructions. This test system is a two-step enzyme-linked immunosorbent assay for the detection of IgG antibodies directed against SARS-CoV-2 S1, specifically targeting the receptor-binding domain (RBD) protein. The solid phase consists of a 96-well microtiter plate (Greiner Bio One, Frickenhausen, Germany) that is coated with the recombinant SARS-CoV-2-S1-RBD-protein. Briefly, the test methodology can be described as follows: antibodies from patients’ serum that are directed against the SARS-CoV-2-S1-RBD-protein bind to the immobilized antigen. Next, a horseradish peroxidase (HRP) conjugated goat anti-human IgG binds to the human IgG antibodies. The following step involves the substrate for the HRP being added, by which the substrate is converted by HRP from colorless into blue; after the addition of a stop solution, the color changes to yellow. The extinctions of the yellow solution can be measured at a wavelength of 450 nm, with reference at 620 nm. The lower threshold is determined by using human serum without antibodies against SARS-CoV-2; the cut-off towards positive values was estimated by using the extinction value as the negative control times five. Thus, samples showing extinctions that were five times higher than the negative control can be interpreted as being positive for anti-SARS-CoV-2 S1. Increasing extinctions represent increasing amounts of antibodies to SARS-CoV-2 S1 protein. The specificity was substantiated by means of sera containing high levels of antibodies against other viral diseases—such as the hepatitis viruses A, B and C, Epstein–Barr virus, cytomegalovirus, influenza viruses A and B, varicella zoster virus and human herpes simplex virus type 1—as determined at the Institute for Medical Virology and Epidemiology and the Institute for Pathology and Neuropathology of the University of Tuebingen, Germany. The results for each of the tested sera were negative in terms of antibodies against the SARS-CoV-2 S1 protein. Serum from patients infected with other human coronaviruses such as HKU-1 and NL63 also proved to be negative.
IgA Antibody Assay: The ELISA test system for the detection of IgA antibodies to SARS-CoV-2 S1-RBD protein was analogous to the anti-SARS-CoV-2 IgG ELISA, except that the HRP-labeled detection antibody was directed against human IgA antibodies.
IgA and IgG assays for the determination of antibodies to the SARS-CoV-2 nucleoprotein (N-protein) in sera were developed in analogy to the assays for anti-SARS-CoV-2-S1-RBD-protein as described above. The first step in these assays involves the SARS-CoV-2 N-protein being bound to the solid phase.

By means of the VNA, we quantified in vitro the ability of human sera from patients to inhibit the infection of human cells Caco-2 (human colorectal adenocarcinoma) with a strain of SARS-CoV-2 virus. The SARS-CoV-2 strain icSARS-CoV-2-mNG [6] was obtained from the World Reference Center for Emerging Viruses and Arboviruses (WRCEVA) of the UTMB (University of Texas Medical Branch). To generate icSARS-CoV-2-mNG stocks, Caco2 cells were infected, the supernatant was harvested 48 h post-infection, centrifuged and stored at −80 °C. For MOI (multiplicity of infection) determination, a titration using serial dilutions of the virus stock was conducted. The number of infectious virus particles per ml was calculated as the (MOI  ×  cell number)/(infection volume), where MOI  =  −ln (1  −  infection rate).
For neutralization experiments, 1 × 104 Caco-2 cells/well were seeded in 96-well plates the day before infection, in media containing 5% FBS. Cells were infected with the SARS-CoV-2 strain icSARS-CoV-2-mNG at a MOI = 1 or mock-infected. Immediately after infection, serum for COVID-19 patients was added to each well in two-fold serial dilutions from 1:40 up to 1:5120. The cells were fixed 48 h post infection with 2% PFA and stained with Hoechst 33,342 (1 µg/mL final concentration) for 10 min at 37 °C. The staining and fixing solution was then removed, after which PBS was added. In order to quantify the infection rates, images were taken with the Cytation3 (Biotek, Hoechst, Germany), and mNG+ cells were automatically counted by the Gen5 Software (Biotek). Titers of neutralizing antibodies (NAbs) were calculated as the half-maximal inhibitory dose (ID50) using 4-parameter nonlinear regression (GraphPad Prism).

The results shown here represent the mean of two independent test series. The numbers of SARS-CoV-2 RNA copies in swab samples observed over approximately five weeks, starting with the onset of COVID-19 symptoms in our patients, are illustrated in Figure 1.
In each of the patients, the amount of virus RNA was highest about one week after the onset of symptoms, with a decline in several orders of magnitude following thereafter. Within a short period of 31 days (patient 3), 37 days (patient 2) and 40 days (Patient 1), virus RNA was no longer detectable in nasal and oro-pharyngeal fluid. All sera taken from the patients revealed negative RT-qPCR results for SARS-CoV-2 RNA, suggesting the absence of viremia.
The results of the levels of anti-SARS-CoV-2 S1-RBD antibodies and the anti-SARS-CoV-2 N antibodies—IgA and IgG—expressed in terms of the absorbance (see Methods), and the titers of the virus-neutralizing antibodies (NAbs), expressed as the half-maximal inhibitory dose (ID50) during the observation phase, are illustrated in Figure 2a–h.
The course of the antibodies (Abs) against the two different regions of SARS CoV-2, the S1-RBD protein and the N-protein and the NAbs in the three affected individuals show a characteristic pattern. All patients exhibited an early rise in the IgA Abs against S1-RBD-protein and N-protein, which peaked around three weeks (t2–t3) and subsequently declined to basal levels at around five weeks (t5). Quantitatively, the response of IgA-Abs was most profound in patient 2, who also had the most severe clinical course. Changes in IgG Ab levels against S1-RBD-protein or N-protein were qualitatively similar but showed a different dynamic. While anti-S1-RBD IgG-Abs rose slowly from the beginning, reaching a maximum at around five weeks after disease onset (t4–t5), they remained elevated at a high level, whereas the anti-N IgG-Abs had already increased at around two weeks (t1) in all patients and rose further thereafter. Again, patient 2 showed the highest levels. The course of NAbs in the patients was time-dependent and qualitatively similar in both types of Abs against the virus S1-RBD-protein.
Marked virus-neutralizing activity was observed as early as week 3 (t2) and rose further by about 6 weeks (t4–t5). However, a decline followed, and markedly lower yet positive levels were recorded at around ten weeks after disease onset (t7–t8). Again, patient 2 showed the highest levels.

We thank Marija Reichenbächer and Nicole Wizke for their excellent technical assistance. We are also grateful to the patients enrolled in this study for donating blood over the observation period. 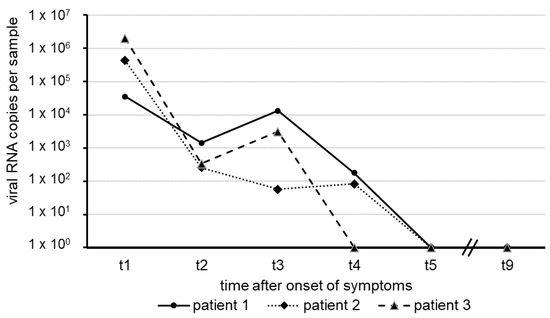 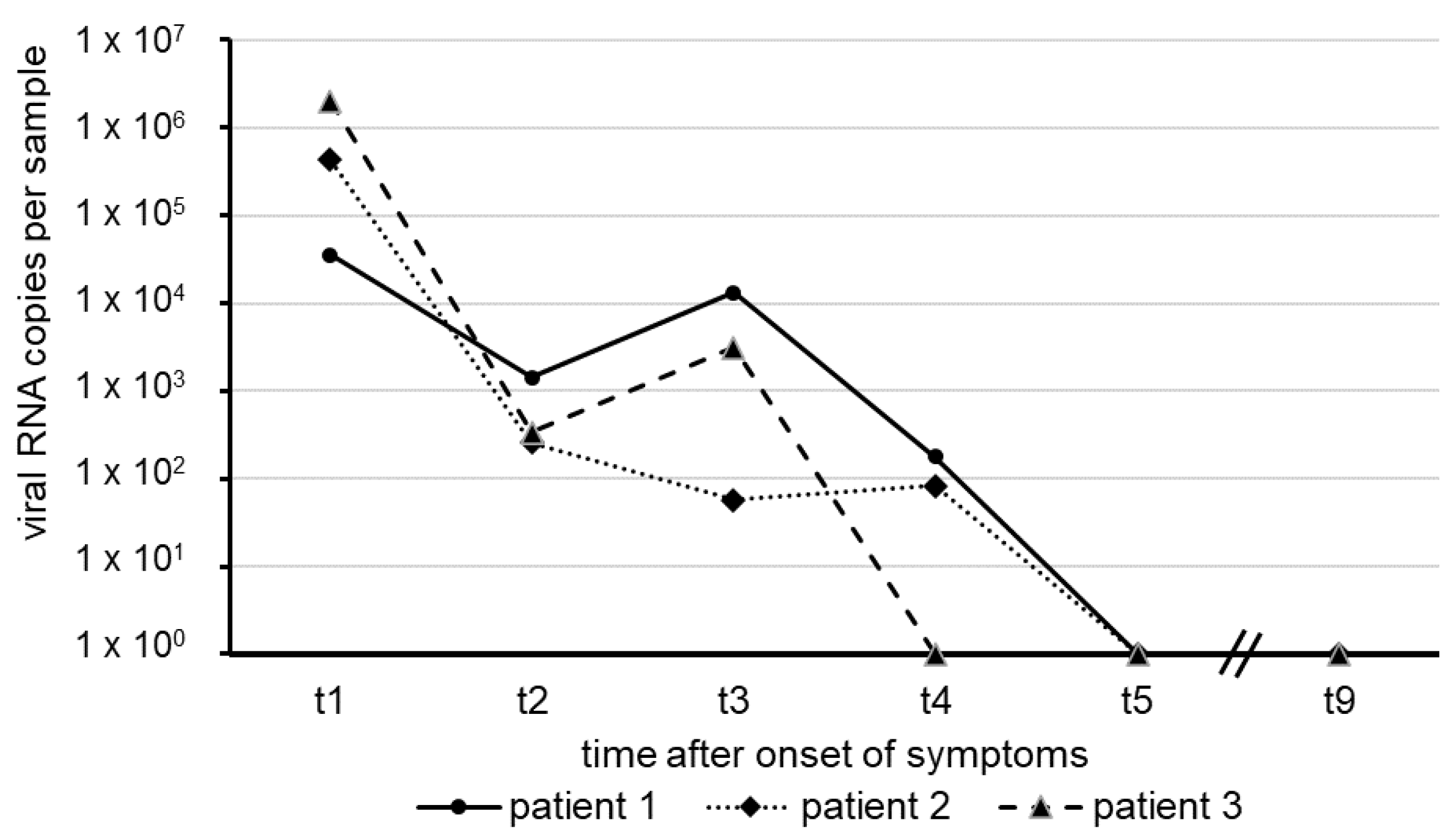 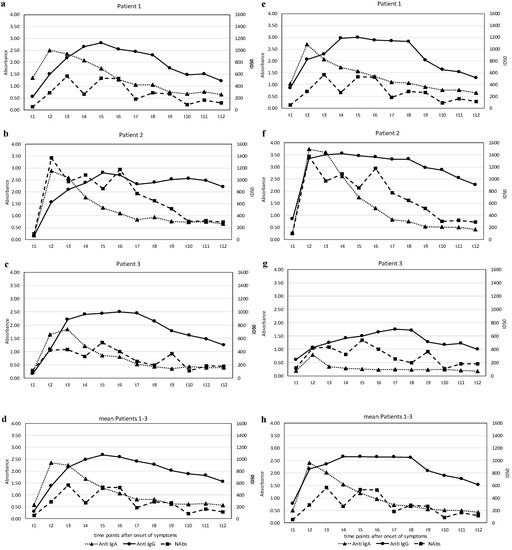 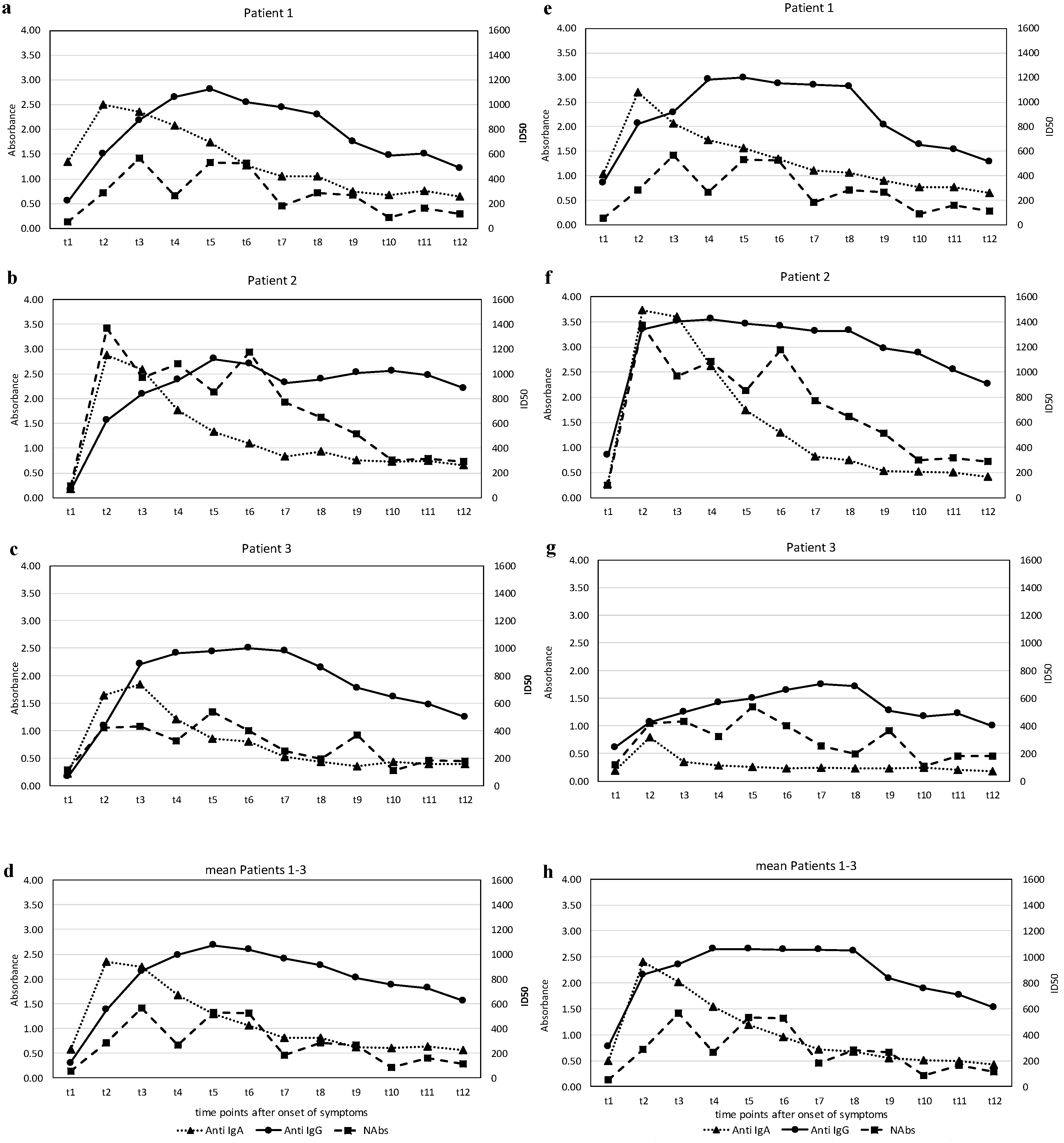