The members of the Coronaviridae family (order Nidovirales) are enveloped, positive-sense, single-stranded RNA viruses infecting three classes of vertebrates: mammals, birds, and fish. Coronaviruses have long and complex genomes, unusual if compared to those of other RNA viruses. A large portion of the coronavirus genome encodes two large, overlapping open reading frames (ORF1a and ORF1b) that are translated and processed into 16 non-structural proteins (nsp1 to 16) [1]. The remaining portion of the genome encodes structural proteins—spike (S), envelope (E), membrane (M), and nucleoprotein (N)—as well as a variable number of accessory proteins [1,2,3]. Several coronavirus genera and subgenera are recognized (https://talk.ictvonline.org/ictv-reports/). In particular, the Betacoronavirus genus includes five out of the seven coronaviruses known to infect humans [4,5,6]. Two “common cold” coronaviruses, human coronavirus OC43 and human coronavirus HKU1, are members of the Embecovirus subgenus, whereas MERS-CoV (Middle East respiratory syndrome coronavirus) is a member of the Merbecovirus subgenus [3]. The recently emerged human-infecting coronavirus, now referred to as SARS-CoV-2 [6] and responsible for the recent pandemic, clusters with SARS-CoV (severe acute respiratory syndrome coronavirus) and other bat-derived viruses in the Sarbecovirus subgenus [6,7,8].
In general, bats host a large diversity of coronaviruses. Both SARS-CoV and MERS-CoV originated in bats and were transmitted to humans via an intermediate host [2,3]. Most likely, SARS-CoV-2 also originated and evolved in bats, eventually spilling over to humans, either directly or through an intermediate, unknown host [7,9,10,11,12,13]. Generally, coronaviruses are prone to cross-species barriers, resulting in a high zoonotic potential [14].
Recombination and positive selection are major evolutionary forces driving viral genome evolution and possibly contributing to host jumps. Complex recombination events have played a role in the frequent host shifts that occurred during coronavirus evolutionary history [3,15,16,17,18]. The S gene was a major target of these events, possibly because the spike protein has a central role in the interaction with the host, in terms both of cell entry and of immune evasion [3,15,16]. Additionally, the emergence of new mutations that confer an advantage in infecting and efficiently spreading in a new host are usually maintained by the action of positive selection [3,19].
Herein, we analyzed the evolution of the Betacoronavirus genus using available genomic data for sarbecoviruses, merbecoviruses, and embecoviruses. Our aim was to determine the relative contribution of recombination and positive selection in driving the evolution of Betacoronavirus subgenera.

Genome sequences were retrieved from the National Center for Biotechnology Information database (NCBI, http://www.ncbi.nlm.nih.gov/). The genome sequence of RmYN02 was downloaded from the GISAID initiative website (https://www.gisaid.org).
All the available complete genomes of sarbecoviruses, merbecoviruses, and embecoviruses were retrieved, but only sequences sampled in different hosts and with less than 99% nucleotide identity in pairwise comparisons were included in the analysis (Table S1). Pairwise identity scores were calculated as 1-(M/N), where M is the number of mismatching nucleotides and N is the total number of positions along the alignment at which neither sequence has a gap or an undetermined character.
Alignments were generated using MAFFT [20], setting the sequence type as nucleotide or codons, as appropriate.

Evidence for recombination signals in each Betacoronavirus subgenus was searched for using the 3SEQ software (v.1.7) [21]. This tool tests all sequence triplets in a given alignment, scanning for mosaic recombination signals. The result is the identification of mosaic regions in which one of the three sequences is the recombinant (child) of the other two (parental). To be conservative, a significance threshold of 0.01 was applied. This method was selected because it has very good power in detecting recombination events, and it is faster than most other approaches [21], thus allowing comparison among datasets by resampling.
To compare the frequencies of recombination in different viral subgenera, we counted the numbers of bona fide unique recombination events. We defined bona fide unique events as all those events that involved the same region in the subgenus alignment, with identical genomic positions for both the start and the end of the recombination segments. We also considered as bona fide unique events all those events with breakpoints falling in a range of 100 nucleotides both from the beginning and from the end of the recombination segments.

Coronavirus ORFs were independently analyzed for the presence of positive selection signals.
Because recombination can inflate positive selection analyses, the 3SEQ results were taken into account. In particular, each ORF sequence was divided into subregions based on the genomic locations of the recombination breakpoints (if any), so as to obtain non-recombinant regions. Only regions longer than 500 (for ORF1a/ORF1b) or 100 (for all other ORFs) nucleotides falling between two recombination breakpoints (or the start/stop codon and a breakpoint) were considered for the analysis (Table 1, Table 2 and Table 3). The E gene was excluded from the analysis due to its low dS in the sarbecovirus lineage [22]. For the same reason, and due to the presence of RNA secondary structures, two N regions and one ORF3a region were masked [22]. ORF10 was not analyzed, as most sarbecoviruses do not encode the full-length protein [22].
To compare the level of positive selection among subgenera, embecovirus and merbecovirus alignments were divided based on sarbecovirus division. For each ORF, we considered the number and the codon length of regions defined in the sarbecovirus analysis, and we generated the same number of regions of the same length for the other two subgenera (Table 1, Tables S2 and S3). Clearly, we also took into account the distribution of the recombination breakpoints in each subgenus; thus, some regions did not exactly match in terms of codon length.
Phylogenetic trees were generated with the phyML software (v3.1), by applying a General Time Reversible (GTR) model with gamma-distributed rates, 4 substitution rate categories, and the estimation of the transition/transversion ratio and proportion of invariable sites [23].
Episodic diversifying selection was analyzed by using the aBSREL (adaptive Branch-Site Random Effects Likelihood [24]) method implemented in the HYPHY suite (version 2.5) [25]. aBSREL was run by testing whether a proportion of the sites of each internal branch of the phylogeny had evolved under positive selection. A Holm–Bonferroni-corrected p value of ≤0.05 for the likelihood ratio test was considered as evidence of statistical significance. To avoid false-positive signals deriving from sequencing errors and transient mutations, tip branches were excluded from the analysis.

We gratefully acknowledge the authors from the originating and submitting laboratories for the sequences from GISAID’s EpiCoV™ database on which this research was based. 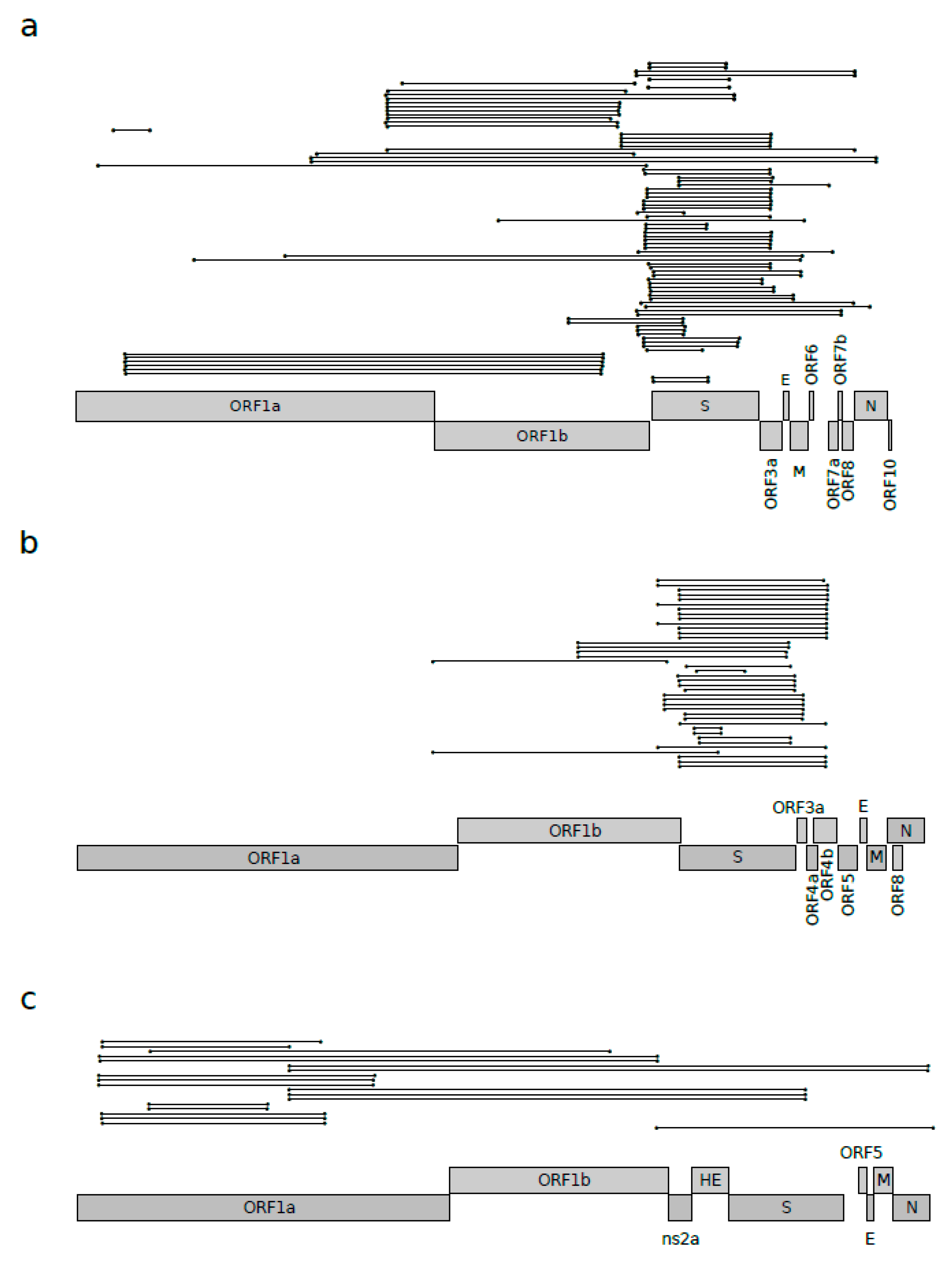