Intergenomic comparisons are useful in determining how viruses are related to each other. Indeed, the primary classification technique used by the International Committee on Taxonomy of Viruses (ICTV), Bacterial and Archaeal Viruses Subcommittee is based upon overall nucleic acid sequence identity. For a number of years, a crude method of estimating this was derived from BLASTN searches at NCBI, by multiplying the “query cover” by the “per. ident” values. The subcommittee established thresholds for the demarcation of viruses into species (95%) and into genera (~70%). While this technique is useful for undertaking pairwise comparisons, it is not convenient for comparisons of larger datasets.
There are a number of online tools and stand-alone software packages that have been used to compare viral genomes, including with the purpose of taxonomic classification. These include average nucleotide identity (ANI and ANI Calculator) [1,2,3], OrthoANI [4], EMBOSS Stretcher [5], Gegenees [6], JSpeciesWS [7], KI-S tool (https://f1000research.com/posters/7-147), pairwise sequence comparison (PASC) [8,9], Sequence Demarcation Tool (SDT) [10], Simka (https://arxiv.org/abs/1604.02412), and Yet Another Similarity Searcher (YASS) [11]. Some of the tools not only calculate, but also offer a visual of the comparison of the nucleic acid sequence relatedness (reviewed in [12]). To these we can add progressiveMauve [13] and VICTOR [14], which are focused on visualization of the alignments/genome relatedness, without explicitly giving access to the similarity values themselves.
The alignment algorithms used to calculate intergenomic relatedness vary from those based on the Needleman-Wunsch global alignment (Stretcher, SDT, PASC), to those based on BLASTN, either with previous genome fragmentation (Gegenees, OrthoANI) or without (PASC, VICTOR). With the exception of PASC and VICTOR, which can normalize the intergenomic identities to the whole genome length, most of the other tools normalize the intergenomic identities to the length of the alignment. This can lead to artificially high similarity values. The differences in algorithms can result in significant differences between the similarities reported by the different tools and can lead to inconsistencies in virus classification.
Here, with the purpose of offering a standardized and high-throughput tool for comparing viral genomes, we developed Virus Intergenomic Distance Calculator (VIRIDIC). VIRIDIC builds and improves on the traditional BLASTN method used by Bacterial and Archaeal Viruses Subcommittee from ICTV, to both calculate and visualize virus intergenomic relatedness. VIRIDIC is available as a web-service and as a stand-alone program for Linux, both accessible at viridic.icbm.de. It reports either intergenomic similarities or intergenomic distances.

VIRIDIC was developed in R 3.5 programming language [15]. The web interface was developed under the shiny web application framework (https://cran.r-project.org/web/packages/shiny/index.html, RStudio, MA, USA). The stand-alone tool for Linux was wrapped in a container using the Singularity v. 3.5.2 software (https://sylabs.io/, Sylabs.io, CA, USA). This VIRIDIC version can be deployed on any systems running the Singularity software, without any additional installation and configuration steps.
VIRIDIC’s work flow consists of four steps. First, each viral genome is aligned against all other genomes in the dataset, using BLASTN 2.9.0+ from the BLAST+ package [16] with the core parameters “-evalue 1 -max_target_seqs 10,000 -num_threads 6”. The default alignment parameters are “-word_size 7 -reward 2 -penalty -3 -gapopen 5 -gapextend 2”. The user can choose between 3 other parameter sets: “-word_size 11 -reward 2 -penalty -3 -gapopen 5 –gapextend 2”, “-word_size 20 -reward 1 -penalty -2”, and “-word_size 28 -reward 1 -penalty -2”.
Second, the BLASTN output is used to calculate pairwise intergenomic similarities. For one genome pair, the number of identical nucleotide matches reported by BLASTN is summed up for all aligned genomic regions. In the case of overlapping alignments, the overlapping part is removed from one of the aligned regions, such that, at the end, the different genome regions are represented only once in the alignments. The intergenomic similarity or distance is calculated as described below, as previously proposed [17]. where
The intergenomic similarity algorithm has been implemented to run on multiple central processing unit cores using the future v. 1.17.0 R package (https://github.com/HenrikBengtsson/future).
In the second step, VIRIDIC also calculates for each genome pair three other indicators related to the alignment: the aligned fraction for genome 1, the length ratio between genome 1 and genome 2, and the aligned fraction for genome 2.
Third, VIRIDIC performs a hierarchical clustering of the intergenomic similarity values. For this, the intergenomic similarities are clustered using the fastcluster v. 1.1.25 R package (https://cran.r-project.org/web/packages/fastcluster/index.html) [18]. For clustering, VIRIDIC uses by default the “complete” agglomeration method (see hclust function, fastcluster package). Several other agglomeration methods from the fastcluster package can be given as parameters.
Fourth, VIRIDIC graphically represents the intergenomic similarity values, the aligned ratios 1 and 2, and the genome length ratios as a heatmap, using the ComplexHeatmap v. 2.5.3 R package [19]. The heatmap is ordered based on the genome clustering by their similarity values.
VIRIDIC outputs an ordered similarity/distance matrix (tab-separated text format), a heatmap (pdf format), and a table with the viral genomes tentatively clustered at the species or genus level (tab-separated text format). Additionally, the stand-alone tool offers access to several intermediary files, both in RDS (file storing for an R object) and tab-separated text format, containing further information about the alignments. These files could eventually be integrated in bioinformatics pipelines.

The dataset used for benchmarking consisted of 60 T7-like phages genomes, from the Autographviridae family, downloaded from the GenBank RefSeq database [20]. These genomes were chosen because they are related, colinear and have an average genome size of 39.4 kbp (range: 31.5–41.7) and G + C mol% content of 50.7 (range: 42.6–61.8; Table S1). The testing dataset also contained the Pelagibacter phage HTVC011P genome, used as outlier for the T7-like phages. For this dataset of 61 phages, the intergenomic similarities were calculated with the following tools: Sequence Demarcation Tool (SDT) [10], pairwise sequence comparison (PASC) [8], OrthoANI [4], Gegenees [6], and VIRIDIC.
Additionally, two Salmonella phages (GE_vB_N5 and FE_vB_N8) were used for the illustration of genome and alignment length differences. The genome of the K155 strain of the T7 phage was used to test the effect of genome permutations and reverse complementarity on the intergenomic distances. Lastly, two artificial DNA sequences were generated by (i) scrambling the T7 genome with Shuffle DNA, part of the Sequence Manipulation Suite [21] and (ii) using Vladimír Čermák’s Random DNA Sequence Generator at http://www.molbiotools.com/randomsequencegenerator.html to generate a 39,937 bp (48.4% GC) sequence.

The following are available online at https://www.mdpi.com/1999-4915/12/11/1268/s1, Table S1: the complete list of viral genomes used for benchmarking VIRIDIC, their genome properties and intergenomic similarity values produced by different tools.

We are thankful to Matthias Schroeder (Institute for Chemistry and Biology of the Marine Environment, Oldenburg) for excellent IT support through the project and for the preparation of the VIRIDIC singularity container. 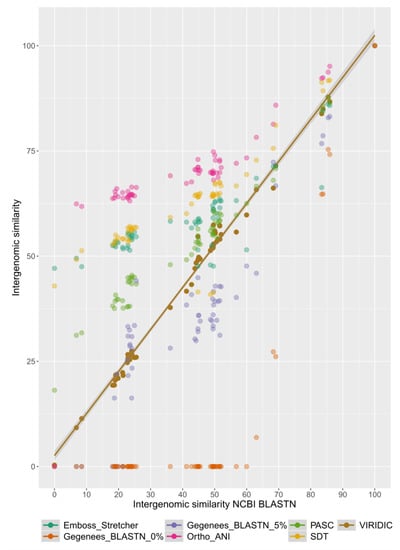