We report the detection and gene coding sequences of three novel Orbivirus species found in six dead farmed white-tailed deer in the United States. Phylogenetic analyses indicate that the new orbiviruses are genetically closely related to the Guangxi, Mobuck, Peruvian horse sickness, and Yunnan orbiviruses, which are thought to be solely borne by mosquitos. However, four of the six viruses analyzed in this work were found as co-infecting agents along with a known cervid pathogen, epizootic hemorrhagic disease virus-2 (EHDV-2), raising questions as to whether the new viruses are primary pathogens or secondary pathogens that exacerbate EHDV-2 infections. Moreover, EHDV-2 is known to be a Culicoides-borne virus, raising additional questions as to whether Culicoides species can also serve as vectors for the novel orbiviruses, if mosquitoes can vector EHDV-2, or whether the deer were infected through separate bites by the insects. Our findings expand knowledge of the possible viral pathogens of deer in the United States. Moreover, due to the close genetic relatedness of the three new orbiviruses to viruses that are primary pathogens of cattle and horses, our findings also underscore a crucial need for additional research on the potential role of the three new orbiviruses as pathogens of other animals. View Full-Text
Keywords: deer farming; Odocoileus virginianus; orbivirus; reovirus; white-tailed deer deer farming; Odocoileus virginianus; orbivirus; reovirus; white-tailed deer
►▼ Show Figures 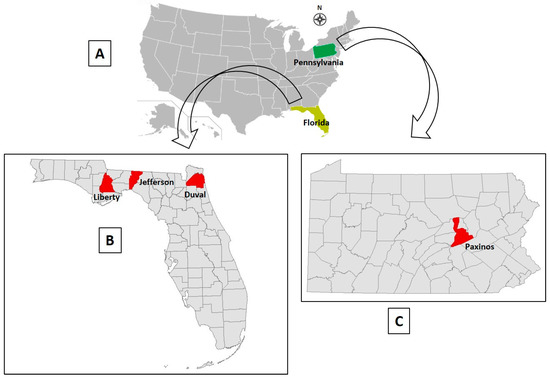