The human cytomegalovirus (HCMV), one of eight human herpesviruses, establishes lifelong latent infections in most people worldwide. Primary or reactivated HCMV infections cause severe disease in immunosuppressed patients and congenital defects in children. There is no vaccine for HCMV, and the currently approved antivirals come with major limitations. Most approved HCMV antivirals target late molecular processes in the viral replication cycle including DNA replication and packaging. “Bright and early” events in HCMV infection have not been exploited for systemic prevention or treatment of disease. Initiation of HCMV replication depends on transcription from the viral major immediate-early (IE) gene. Alternative transcripts produced from this gene give rise to the IE1 and IE2 families of viral proteins, which localize to the host cell nucleus. The IE1 and IE2 proteins are believed to control all subsequent early and late events in HCMV replication, including reactivation from latency, in part by antagonizing intrinsic and innate immune responses. Here we provide an update on the regulation of major IE gene expression and the functions of IE1 and IE2 proteins. We will relate this insight to experimental approaches that target IE gene expression or protein function via molecular gene silencing and editing or small chemical inhibitors. View Full-Text
Keywords: herpesvirus; cytomegalovirus; immediate-early; IE1; IE2; antiviral; ribozyme; RNA interference; CRISPR/Cas; small molecule herpesvirus; cytomegalovirus; immediate-early; IE1; IE2; antiviral; ribozyme; RNA interference; CRISPR/Cas; small molecule
►▼ Show Figures 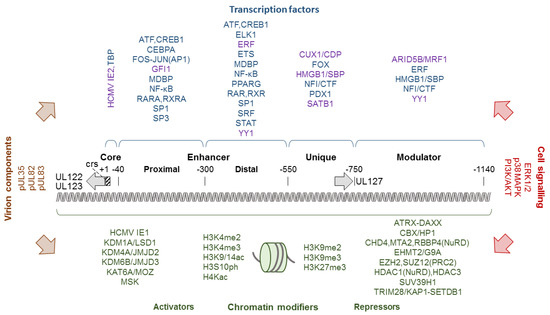