Modeling Challenges of Ebola Virus–Host Dynamics during Infection and Treatment

:
Mathematical modeling of Ebola virus (EBOV)–host dynamics during infection and treatment in vivo is in its infancy due to few studies with frequent viral kinetic data, lack of approved antiviral therapies, and limited insight into the timing of EBOV infection of cells and tissues throughout the body. Current in-host mathematical models simplify EBOV infection by assuming a single homogeneous compartment of infection. In particular, a recent modeling study assumed the liver as the largest solid organ targeted by EBOV infection and predicted that nearly all cells become refractory to infection within seven days of initial infection without antiviral treatment. We compared our observations of EBOV kinetics in multiple anatomic compartments and hepatocellular injury in a critically ill patient with Ebola virus disease (EVD) with this model’s predictions. We also explored the model’s predictions, with and without antiviral therapy, by recapitulating the model using published inputs and assumptions. Our findings highlight the challenges of modeling EBOV–host dynamics and therapeutic efficacy and emphasize the need for iterative interdisciplinary efforts to refine mathematical models that might advance understanding of EVD pathogenesis and treatment.
Keywords:
Ebola virus; mathematical modeling; viral kinetics; liver

Additional strategies to prevent and treat Ebola virus disease (EVD) are urgently needed, as mortality remains unacceptably high and no proven-effective therapies are presently available [1]. In support of preclinical animal models, simple mathematical models that account for Ebola virus (EBOV) titer kinetics, might provide insight into the timing of when EBOV therapeutics or prophylactics might be effective [2]. More complex models that account for EBOV viral titer kinetics, susceptible cells, EBOV-infected cells, and immune response dynamics might advance understanding of EVD pathogenesis and assist in prioritization of therapies for rigorous evaluation in randomized clinical trials (RCTs) [3]. Recently, Madelain et al. [4] developed a single-anatomic compartment immuno-pathogenesis mathematical model to provide insights into EBOV–host dynamics in nonhuman primates and predict effectiveness of favipiravir and remdesivir, both viral RNA polymerase inhibitors, for post exposure prophylaxis and treatment of EVD in humans.
We discuss the assumption of a single anatomic compartment of EBOV infection in the models described by Madelain et al. [4] and Martyushev et al. [3], and the selection of the liver as the largest solid organ targeted by EBOV by Madelain et al. We compare assumptions from these models with our observations in a critically ill patient with EVD who was cared for at the National Institutes of Health (NIH) Clinical Center who developed severe meningoencephalitis and multiorgan failure and received supportive care alone without experimental therapy [5].
To better understand EBOV–host interactions and conditions of antiviral efficacy predicted by the Madelain et al. model, we replicated their model using published inputs and assumptions. Our findings highlight the challenges of modeling EBOV–host interactions and therapeutic efficacy and emphasize the need for iterative interdisciplinary efforts to refine mathematical models to further advance understanding of EVD pathogenesis and treatment.

We previously measured daily viral RNA levels in serum [5], and intermittently in semen [6] of a critically ill patient with EVD who was cared for at the NIH Clinical Center during acute illness and recovery. In the current study viral RNA levels in tracheal aspirate on days 17 to 19 and in axillary sweat on days 21, 24, and 25 post-symptom onset were measured. EZ-1 reverse-transcription quantitative polymerase chain reaction (RT-qPCR) testing was used to quantify viral RNA as previously described [6,7]. Daily aspartate aminotransferase (AST) and alanine aminotransferase (ALT) levels were measured in whole blood at the point of care during acute illness using the Piccolo Xpress (Abaxis, Union City, CA, USA) blood chemistry analyzer and expressed as a ratio of AST to ALT. All assays performed fell within permissible usage in the original patient consent under NIH IRB protocol #15-I-0083.

We reproduced the model described in Figure 3 in Madelain et al. [4] using the parameter values outlined in Table 1 [4] using Berkeley Madonna (version 9.0). The reproduced equations are provided in the Supplementary Material.

Viral RNA levels in tracheal aspirate on days 17 to 19 and in axillary sweat on days 21, 24, and 25 of post-symptom onset were significantly elevated relative to previously reported levels in serum [5] at matched time points (Figure 1). High concentration replicating virus was detected in semen during recovery [6]. At day 8 post-symptom onset in our patient, we observed a peak AST to ALT ratio of 3.5 compared with a ratio <1.0 in a cohort of patients with acute hepatitis C infection [8,9] (Figure 2), where viral replication and cellular injury are limited to the liver.
We ran the model described by Madelain et al. using the best estimated parameter space (reported in Table 1 in Madelain et al. [4]) to gain further understanding of the suggested interplay among EBOV, the liver, and immune response. We found that Madelain’s model suggests that without antiviral treatment (ε = 0), within 7 days post infection ~99% of pre-infection liver (or target) cells become refractory (R) to EBOV infection (Figure 3a,b). Accordingly, viral load (V) and productive EBOV-infected cells (I2) peak at day ~7 post infection followed by viral decline.
To advance understanding of the model’s predicated effects of antiviral treatment in blocking viral production, we simulated the model assuming a fixed drug efficacy of ε = 0.5 or ε = 0.9 (as predicted for favipiravir or remdesivir, respectively) from days 0 to day 12 post infection (i.e., the duration of antiviral treatment in animals in Madelain et al. [4]). Our simulations agreed with the reported predictions of Madelain et al. for ε = 0.5 (Figure 3c,d). However, under higher efficacy antiviral treatment (ε = 0.9), the model predicted a delay in timing when ~99% of pre-infection liver cells became refractory with a higher peak in V and I2 (Figure 3e,f) compared with lower efficacy antiviral treatment (ε = 0.5) (Figure 3c,d) when treatment was stopped at day 12 post infection.
We further found that the model by Madelain et al. predicts that if remdesivir is initiated from the time of infection and continues for an extended interval, a longer viral ramp-up with a lower peak (Figure 4a) and 100% survival is expected [4]. However, if remdesivir is initiated after peak viral load (i.e., ~7 days post infection), there is a limited effect on viral load (compare Figure 4b–d with Figure 3a,b) and a significant increase in predicted mortality, suggesting a very narrow therapeutic window for remdesivir.

This research was funded in part by the U.S. National Institute of Health (NIH) Intramural Research Program, and NIH grants R01AI144112, R01-AI078881 and R01GM121600. The content of this publication does not necessarily reflect the views or policies of the Department of Health and Human Services, nor does mention of trade names, commercial products, or organizations imply endorsement by the U.S. Government.

The authors declare no conflict of interest. No funders had any role in the design of the study; in the collection, analyses, or interpretation of data; in the writing of the manuscript, or in the decision to publish the results. 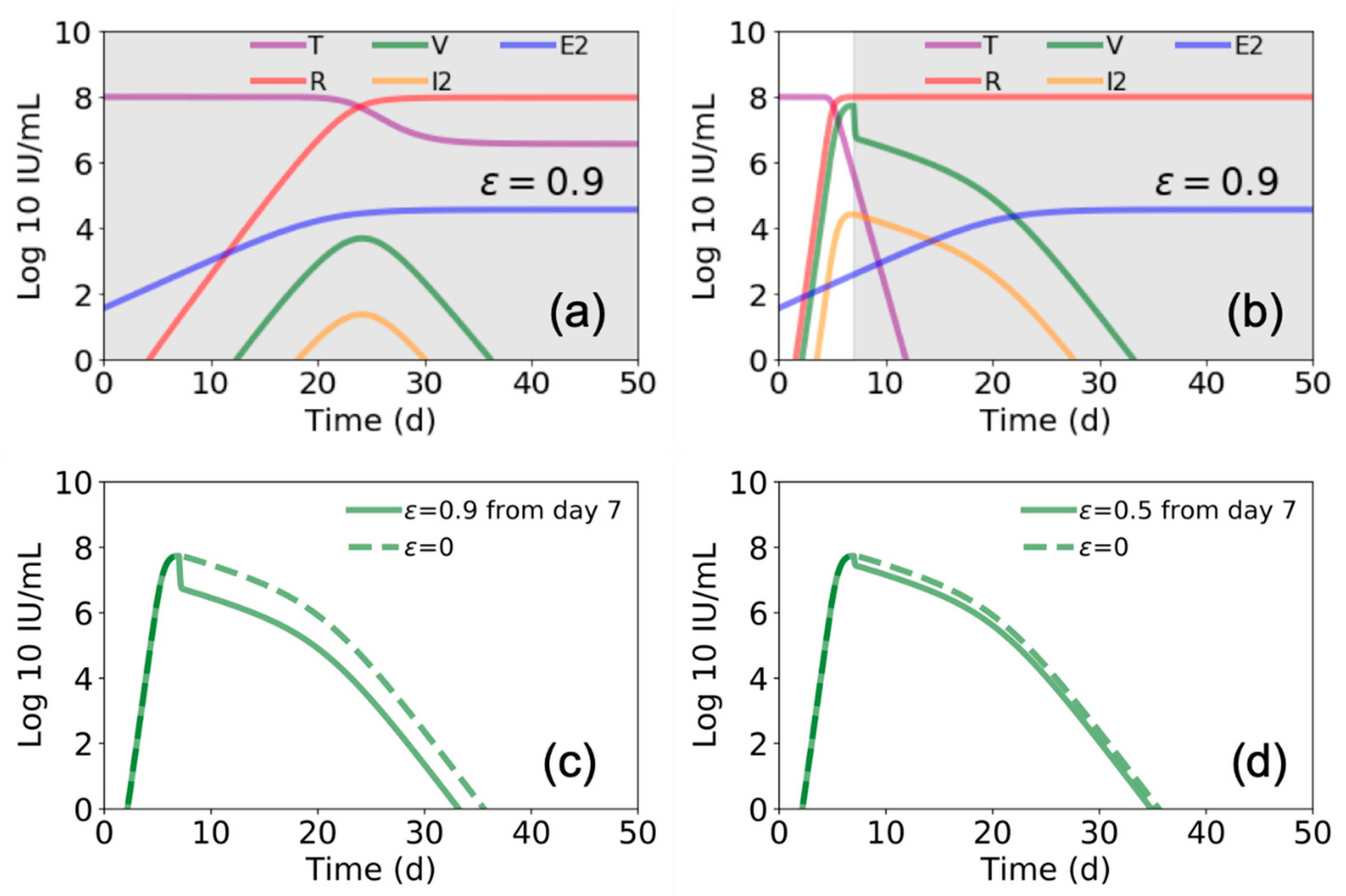