Viral ecology of terrestrial habitats is yet-to be extensively explored, in particular the terrestrial subsurface. One problem in obtaining viral sequences from groundwater aquifer samples is the relatively low amount of virus particles. As a result, the amount of extracted DNA may not be sufficient for direct sequencing of such samples. Here we compared three DNA amplification methods to enrich viral DNA from three pristine limestone aquifer assemblages of the Hainich Critical Zone Exploratory to evaluate potential bias created by the different amplification methods as determined by viral metagenomics. Linker amplification shotgun libraries resulted in lowest redundancy among the sequencing reads and showed the highest diversity, while multiple displacement amplification produced the highest number of contigs with the longest average contig size, suggesting a combination of these two methods is suitable for the successful enrichment of viral DNA from pristine groundwater samples. In total, we identified 27,173, 5,886 and 32,613 viral contigs from the three samples from which 11.92 to 18.65% could be assigned to taxonomy using blast. Among these, members of the Caudovirales order were the most abundant group (52.20 to 69.12%) dominated by Myoviridae and Siphoviridae. Those, and the high number of unknown viral sequences, substantially expand the known virosphere. View Full-Text
Keywords: viral metagenome; groundwater; aquifer; AquaDiva; sequencing library preparation viral metagenome; groundwater; aquifer; AquaDiva; sequencing library preparation
►▼ Show Figures 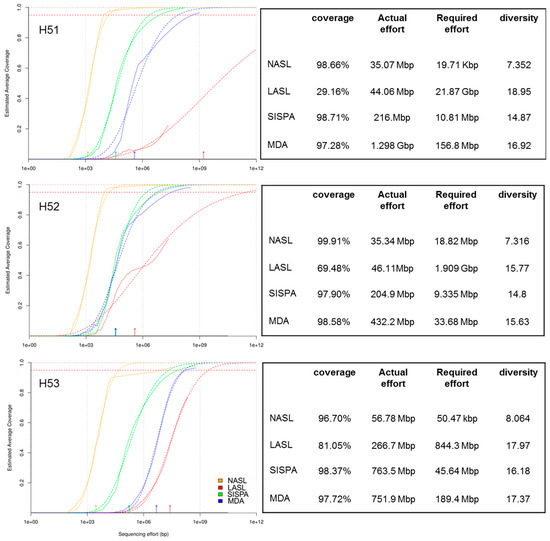