A Needle in A Haystack: Tracing Bivalve-Associated Viruses in High-Throughput Transcriptomic Data
Next Article in Special Issue

The Tug-of-War between Plants and Viruses: Great Progress and Many Remaining Questions
Previous Article in Special Issue

Noroviruses are highly diverse viruses that are the major viral cause of acute gastroenteritis in humans. Although these viruses can infect multiple mammalian species, their potential for zoonosis is not well understood, especially within Genogroup IV (GIV), which contains viruses that infect humans, canines, and felines. The study of GIV viruses has been, in part, hindered by the limited number of complete genomes. Here, we developed a full-genome amplicon-based platform that facilitated the sequencing of canine noroviruses circulating in the United States. Eight novel nearly full-length canine norovirus genomes and two nearly complete VP1 sequences, including four GIV.2, three GVI.1, and three GVI.2 viruses, were successfully obtained. Only animal strains exhibited GVI/GIV chimeric viruses, demonstrating restrictions in norovirus recombination. Using genomic, phylogenetic, and structural analyses, we show that differences within the major capsid protein and the non-structural proteins of GIV and GVI noroviruses could potentially limit cross-species transmission between humans, canines, and felines. View Full-Text
Keywords: norovirus; canine norovirus; inter-species transmission norovirus; canine norovirus; inter-species transmission
►▼ Show Figures 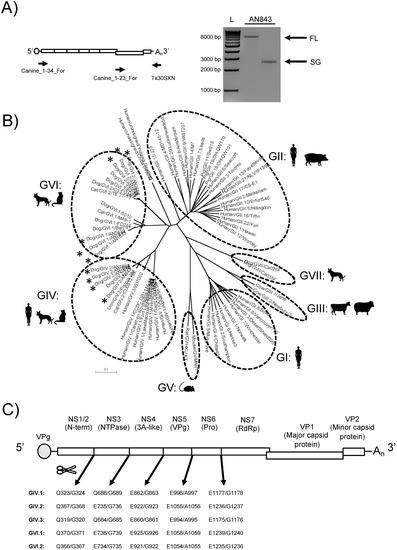