Measles virus (MeV) is a paramyxovirus that infects humans, principally children. Despite the existence of an effective and safe vaccine, the number of cases of measles has increased due to lack of vaccination coverage. The World Health Organization (WHO) reports that the number of cases worldwide multiplied fourfold between January and March 2019, to 112,000. Today, there is no treatment available for MeV. In recent years, it has been demonstrated that natural extracts (herbal or algal) with antiviral activity can also work as reducing agents that, in combination with nanotechnology, offer an innovative option to counteract viral infections. Here, we synthetized and evaluated the antiviral activity of gold nanoparticles using garlic extract (Allium sativa) as a reducing agent (AuNPs-As). These nanoparticles actively inhibited MeV replication in Vero cells at a 50% effective concentration (EC50) of 8.829 µg/mL, and the selectivity index (SI) obtained was 16.05. AuNPs-As likely inhibit viral infection by blocking viral particles directly, showing a potent virucidal effect. Gold nanoparticles may be useful as a promising strategy for treating and controlling the infection of MeV and other related enveloped viruses.
Keywords: measles; antivirals; gold nanoparticles; virucidal activity measles; antivirals; gold nanoparticles; virucidal activity

Measles is a viral disease characterized by fever, skin rash, cough and conjunctivitis, and a generalized immune suppression. The disease is caused by an enveloped virus with a single-strand RNA negative polarity ssRNA (−) genome belonging to the family [1]. Measles can lead to opportunistic infections and complications, such as pneumonia and gastro-intestinal diseases, due to increased susceptibility. Safe and effective, live-attenuated virus vaccines have led to a substantial reduction in measles morbidity and mortality [2], although, in recent years the number of cases and deaths has increased. Measles resurgence may be imminent thanks to reduced measles vaccine acceptance in the industrialized world and the lack of vaccination coverage in developing countries [3]. The World Health Organization (WHO) estimated that approximately 114,900 people, mostly children under five years of age, died of measles and resulting sequelae in 2014 [4].
Despite significant achievements in the search for new antiviral treatments, the number of available antiviral compounds remains limited. Current antivirals are only effective against a select group of pathogens, as well, and notably, there is no antiviral drugs currently available against Measles virus (MeV) [5].
Recently, it has been reported the use of natural bioactive compounds, as reducing agents of metal salts in the reduction of silver and gold ions to Nanoparticles (NPs) with antiviral properties [6]. The synthesis of NPs by green chemistry provides an advance due to is cost-effective and environment-friendly characteristics, easy to apply for large scale synthesis, and in this method, there is no need to use some techniques, including high pressure, temperature, or toxic chemicals [7].
In this study, gold nanoparticles using a garlic extract (AuNPs-As) as a reducing agent were synthesized and the antiviral activity against MeV was evaluated. Nanoparticles have been proposed as antiviral systems, because they show activity against enveloped and non-enveloped viruses. Today, nanotechnology offers an innovative option to counteract viral infections. Different mechanisms of action have been described, inside (in replication process, translation, transcription) or outside the cell (blocking the entry or exit of the virions) [8]. At the present time, the antibacterial, anticancer and antioxidant properties of nanoparticles have been widely explored, however, their antiviral properties remain an area in development. Hence, we propose the use of nanoparticles as an antiviral alternative for therapeutic use against MeV.

Two hundred grams of garlic bulbs were peeled and disinfected with a 1% chlorine solution for 5 min, and then the garlic was crushed and boiled at 100 °C for 5 min in 500 mL distilled water. Afterward, the mixture was filtered. The final product was lyophilized for 24 h.

Gold nanoparticles (AuNPs) were obtained according to the Turkevich method [9] which was modified using garlic extract (As) as reducing agent. One hundred to one of a solution 0.1 mg/mL of garlic extract was added to a 1 mL of 1 mM HAuCl4 (St. Louis, MO, USA). The pH of the resulting solution was adjusted with NaOH at 1 N until reaching a pH of 9, and then the sample was heated to 100 ± 5 °C with constant agitation for 20 min. A variation of yellow to red indicates the formation of gold nanoparticles reduced with garlic extract (AuNPs-As), and finally, the AuNPs-As was passed through 0.2 µm filter.

The characteristic resonance plasmon of nanoparticles was measured by UV-Vis absorption spectroscopy equipment (NanoDrop 2000 Spectrophotometer, Thermo Scientific®) with a frequency range between 300 to 700 nm. The size and Z potential of the AuNPs-As was determined by dynamic light scattering (DLS) using a nanosizer NS90 (Malvern Instruments, Malvern, UK). The morphology and size of gold nanoparticles, as well as its interaction with the virus, were observed by transmission electron microscopy (TEM) in a Field Emission Gun, FEI TITAN G2 80-300, operated at 300 kV, using techniques such as bright field (BF) and Z-contrast (HAADF-STEM) imaging.

The effect of AuNPs-As and their precursors, HAuCl4 and garlic extract (Allium sativum) on Vero cells viability was determined by MTT assay (3-[4,5-dimethylthiazole-2-yl]-2,5-diphenyltetrazolium bromide) [10]. The cells were cultured in 96-well plates at a density of 15,000 cells/well at 37 °C in an atmosphere of 5% CO2 until confluence of 80–90%. Several concentrations (0.1, 1, 10, 100, and 250 µg/mL) of treatments diluted in DMEM were added; after 48 h at 37 °C and 5% of CO2 of incubation, the media were replaced with 22 µL of 5 mg/mL MTT dissolved in phosphate-buffered saline (PBS). After 2 h, 100 µL of DMSO was added. The optical density at a wavelength of 450 nm (OD450 nm) was measured using a microplate reader (Multiskan FC, Thermo Fisher Scientific, Bedford, MA, USA). Cell viability was expressed by percentage as the mean value of three independent experiments considering control cells absorbance as 100% viable. CC50 was the concentration of the test substances that inhibited the Vero cells growth by 50%, compared with the growth of the untreated cells.

The cells were cultured in 6-well plates at a density of 320,000 cells/well at 37 °C in an atmosphere of 5% CO2 until an 80–90% confluence. Vero cells were infected with 80 to 90 Plaque Formation Units (PFU) of MeV and treatments AuNPs-As and their precursors, HAuCl4 and garlic extract (Allium sativum) at different concentrations (0.03–10 μg/mL), virus and treatments were added in a volume of 1 mL, for a total of 2 mL per well. After 1 h at 37 °C and 5% of CO2 of incubation, the viral inoculum and treatment were removed, and the monolayer was overlaid with medium containing 0.6% agar (MP Biomedicals, Cat No. 194615 Lot No. R19854) in 2 mL of DMEM. After 72 h of incubation in a controlled environment, the agar layer was removed and fixed with methanol-acetone 1:1 for 30 min at −30 °C and stained with 1% crystal violet. The values of effective concentration by 50% (EC50) were determined by regression model, and SI was calculated with values of CC50 previously obtained with the formula below. The evaluation of treatments was achieved using three wells with each concentration evaluated. This trail was done in triplicate.

Vero cell monolayers were infected with 80–90 PFUs of MeV. NPs was added at a concentration of 8.829 μg/mL (EC50) at different times of infection: 60 min pre-infection, 0, 15, 30 min, 1, 2, 4, and 6 h post-infection. Thereafter, for each treatment, cells were incubated with NPs for 1 h and then washed with PBS, the monolayer was overlaid with medium containing 0.6% agar (MP Biomedicals) in 2 mL of DMEM; after 72 h of incubation in controlled environment, the agar layer was removed and fixed with methanol-acetone 1:1 for 30 min at −30 °C and stained with 1% crystal violet; subsequently, plaques were counted. This trial was done in triplicate.

The virucidal activity of AuNPs-As against MeV was assessed using plaque reduction assay. The Vero cells were cultured in 6-well plates at a density of 320,000 cells/well at 37 °C in an atmosphere of 5% CO2 until an 80–90% confluence; old medium was removed. The assays were performed by adding 500 μL of MeV in a density of 80–90 PFU and 500 μL of NPs for 0, 3, and 6 h at a concentration of EC50. The plate was incubated 1 h at 37 °C and 5% of CO2, mix of NPs, and virus was removed and was overlaid with medium containing 0.6% agar (MP Biomedicals) in 2 mL of DMEM; after 72 h of incubation on controlled environment, agar was removed and fixed with methanol-acetone 1:1 for 30 min at −30 °C and stained with 1% crystal violet. The PFU were counted. This trial was done in triplicate.

The ultraviolet-visible spectroscopy of AuNPs-As showed a characteristic resonance plasmon at 537 nm (Figure 1A), and two nanoparticles populations were observed by DLS (Figure 1B) the average size was of 6 nm with a low polydispersity index (PdI), indicating a low variation in size distribution. The zeta potential was of +21.2 mV, as Figure 1C shows. In addition, the histogram of particle size distribution from TEM obtained was 11 nm. (Figure 1D).

Vero cells (which express CD46 receptor) were used as a model to assess gold nanoparticles cytotoxicity. The toxicity of AuNPs-As and their precursors, HAuCl4 and garlic extract (Allium sativum) was assessed at different concentrations by colorimetric MTT assay (Figure 2). A significant viability reduction was obtained only with the highest concentration tested (200 μg/mL) of AuNPs-As and HAuCl4. The cytotoxicity concentration 50% (CC50) was determined at 141.75 µg/mL for AuNPs-As and 231.74 μg/mL for HAuCl4. We also performed a viability assay using gold nanoparticles synthesized by the technique previously reported by Martínez-Torres et al. [12] and using chitosan as reducing agent (AuNPs-Chi) to compare the effect of both techniques [13]. This synthesis showed a cytotoxicity of 68.86% at a concentration of 10 μg/mL, which is higher than that of AuNPs-As.

3.4. Effect of AuNPs-As on Viral Infection Was Determined by Time of Addition Assays

To determine which step of the MeV cycle was targeted by AuNPs-As, “time of addition” experiments were performed. Vero cells were infected and exposed to AuNPs-As (EC50 = 8.829 μg/mL) at different times of infection. As shown in Figure 4, the most efficient inhibition was observed in early steps of infection (15 and 30 min after infection).

Virucidal effect tests were performed by the technique of PFUs and qPCR to determine if the AuNPs-As had an effect directly on the viral particle by preventing its contact with the cell. AuNPs-As (EC50 = 8.829 μg/mL) were mixed with the virus during different times (0, 3, and 6 h) before infection, to evaluate the percentage reduction of PFUs or viral load. As shown in Figure 5A, AuNPs-As exhibited a reduction of 84% of PFU at 3 h of incubation and 92% at 6 h of incubation with the EC50 of the virus. When measuring the viral load by qPCR, a reduction of 95% was obtained at 3 h and 97% at 6 h of incubation.
HAADF-STEM images obtained from these suspensions corroborate the AuNPs-As/viral interactions (Figure 6).
Accordingly, we propose that AuNPs-As bind to the viral particle blocking the union with cell receptors inhibiting the start of the viral cycle (see Figure 7).

In this study, we tested the antiviral activity of gold nanoparticles synthesized by green chemistry using garlic extract (AuNPs-As) against Measles virus infection. The lack of cytotoxicity at inhibitory concentrations, as indicated by the selectivity index, demonstrated that AuNPs-As might be an excellent virus inactivating agent against MeV infection. Virucidal activity is not only a prophylactic strategy before viral infection but can also be successful as a treatment after infection, thereby avoiding virus dissemination. AuNPs-As may be useful as a promising strategy to treat and control the infection of MeV and other related enveloped viruses.

The authors thank Laboratorio de Inmunología y Virología, Facultad de Ciencias Biológicas, UANL, for the use of the facilities. M. Sc. Alejandra Arreola for participating in the review of the article. 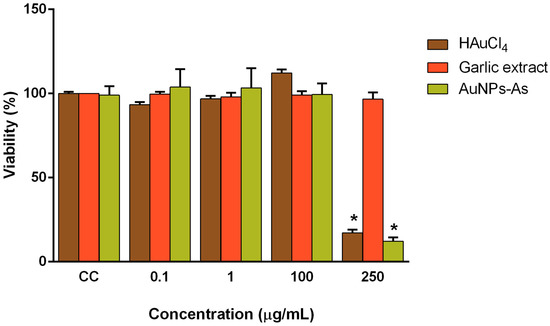 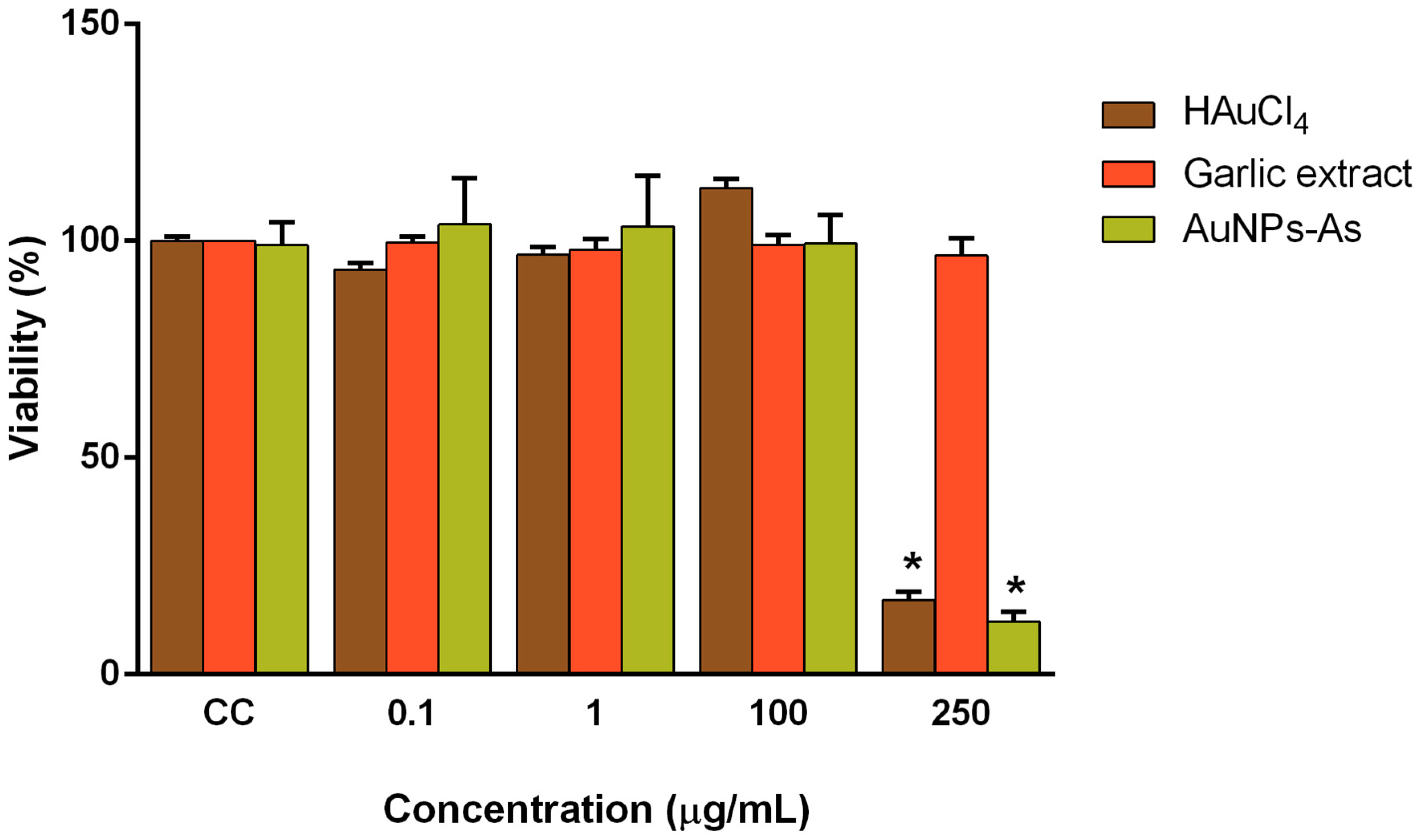 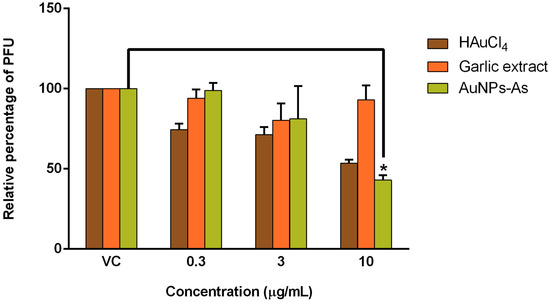 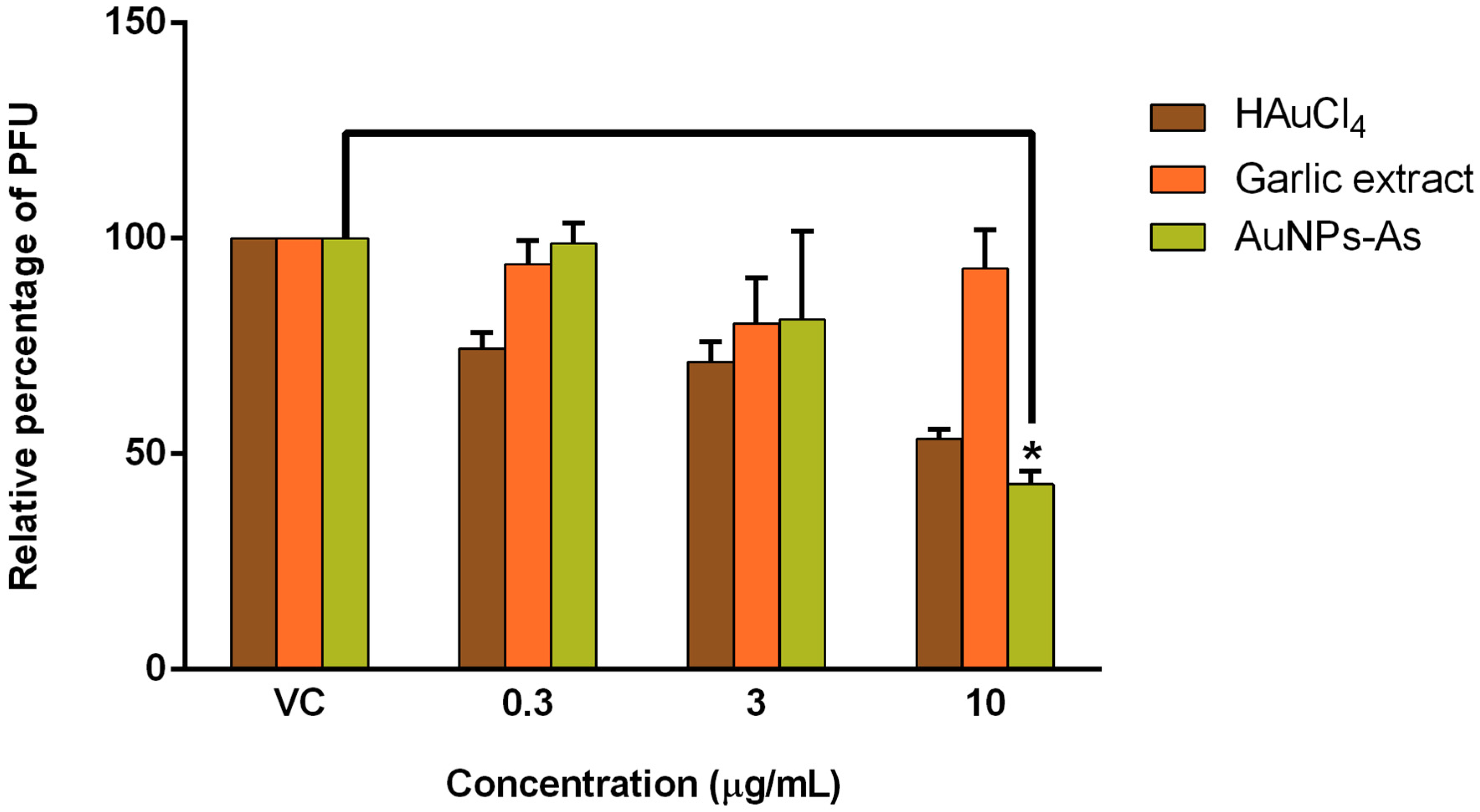 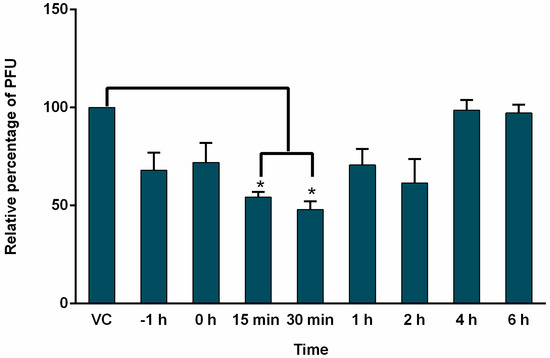 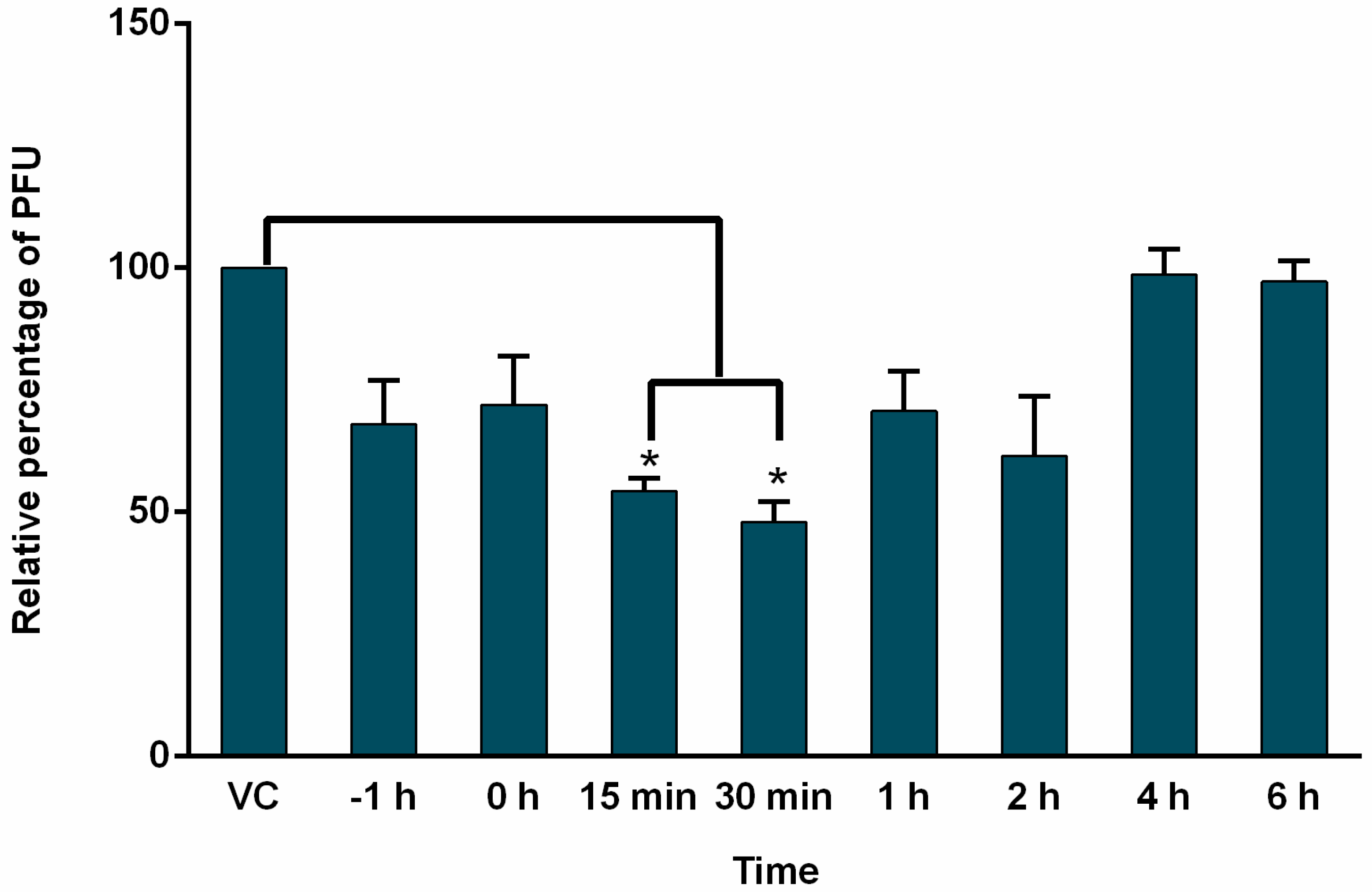 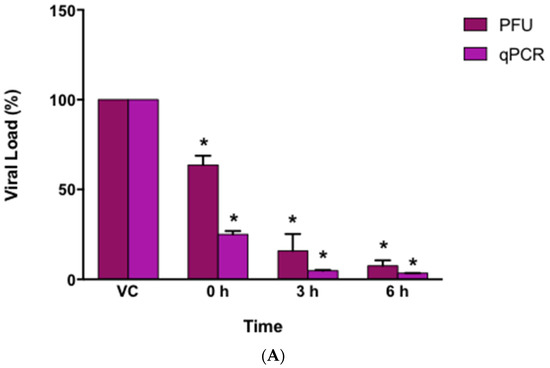 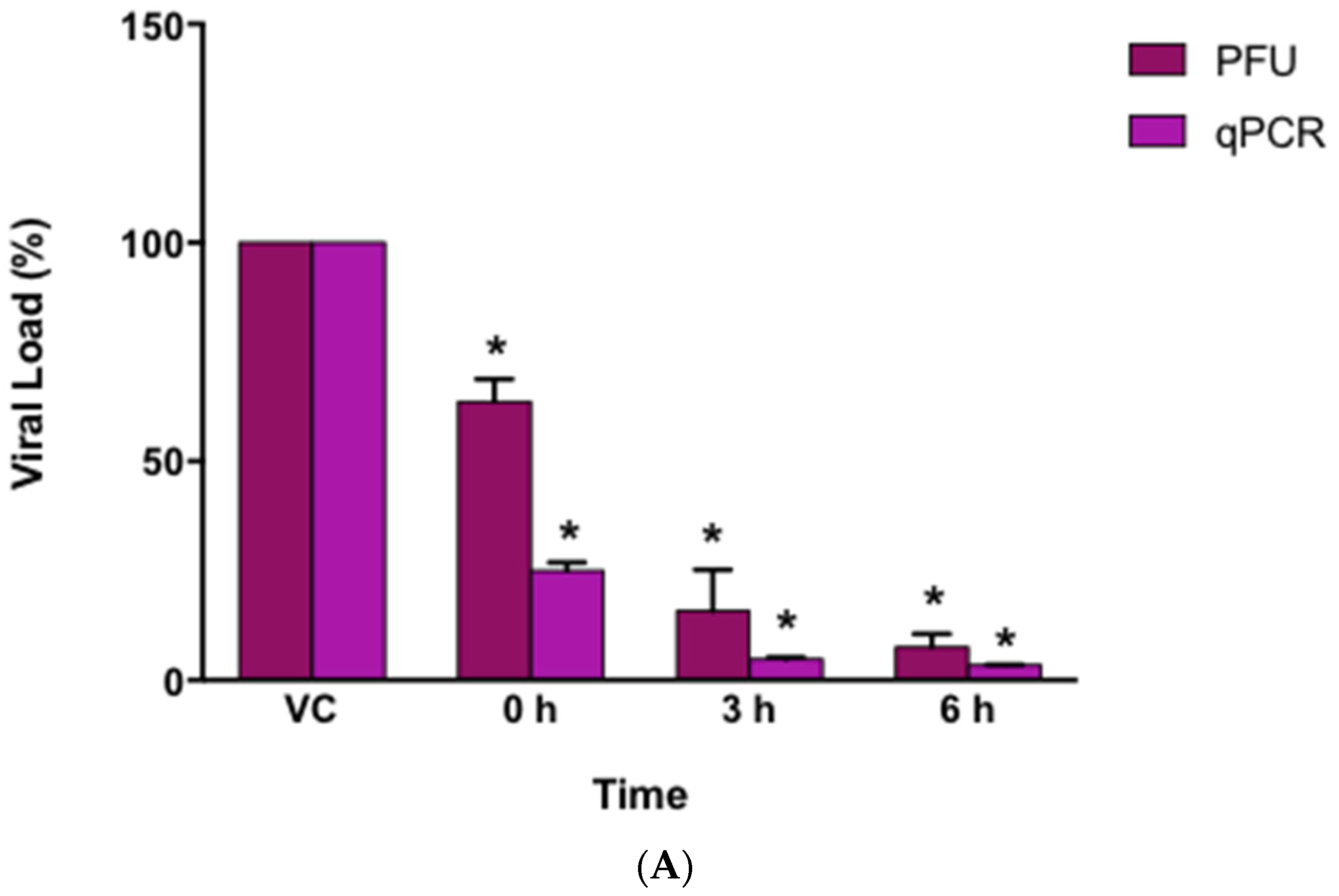 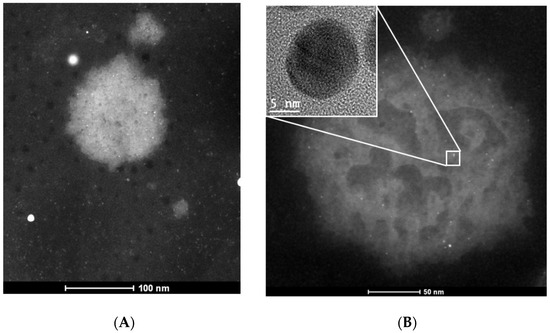 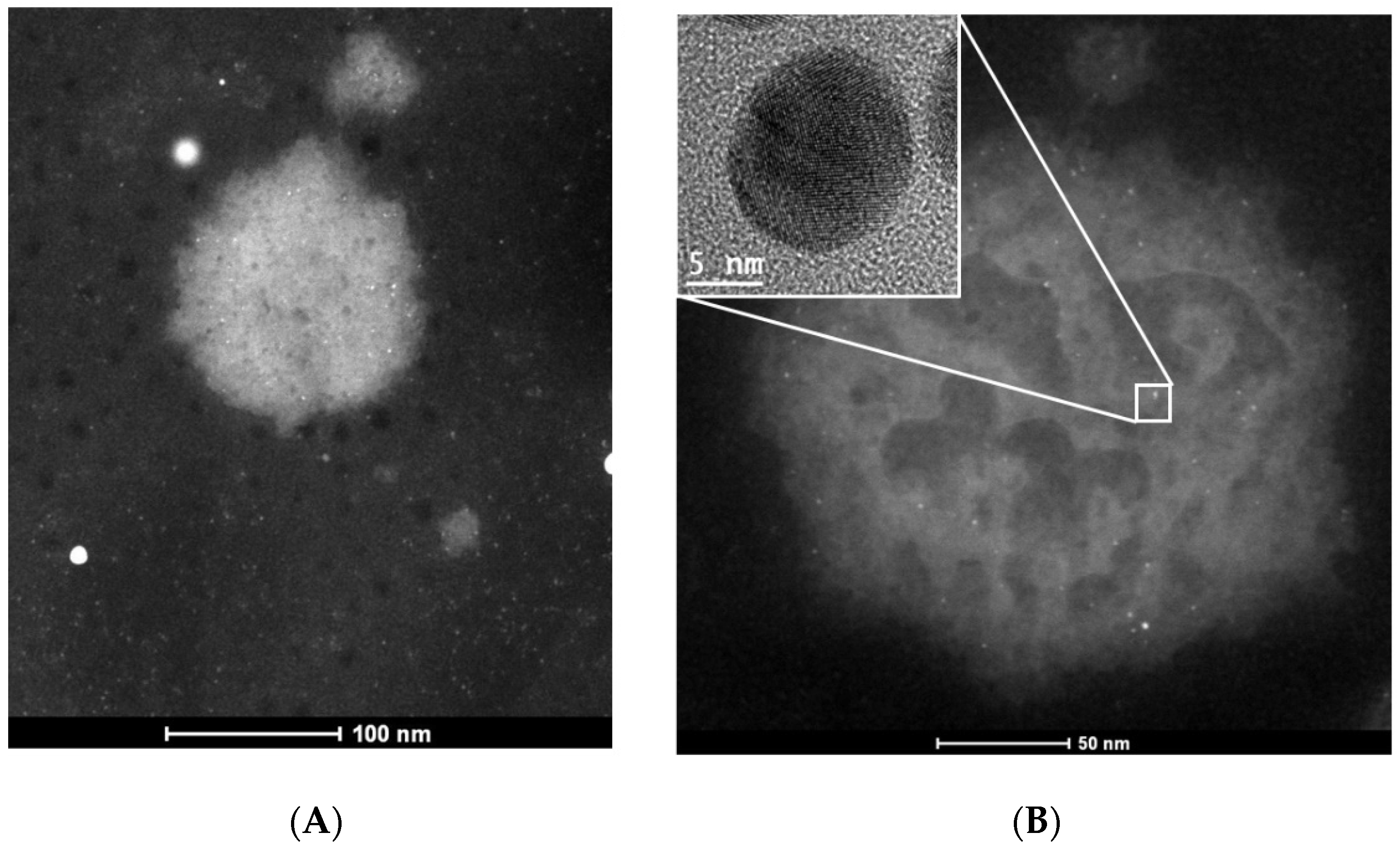 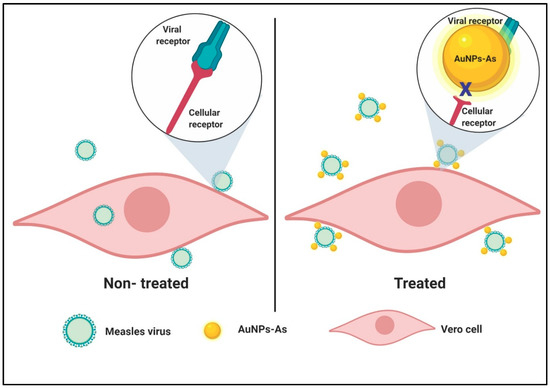