Host Shutoff in Influenza A Virus: Many Means to an End

Vaccination could be an evolutionary pressure on seasonal influenza if vaccines reduce the transmission rates of some (“targeted”) strains more than others. In theory, more vaccinated populations should have a lower prevalence of targeted strains compared to less vaccinated populations. We tested for vaccine-induced selection in influenza by comparing strain frequencies between more and less vaccinated human populations. We defined strains in three ways: first as influenza types and subtypes, next as lineages of type B, and finally as clades of influenza A/H3N2. We detected spatial differences partially consistent with vaccine use in the frequencies of subtypes and types and between the lineages of influenza B, suggesting that vaccines do not select strongly among all these phylogenetic groups at regional scales. We did detect a significantly greater frequency of an H3N2 clade with known vaccine escape mutations in more vaccinated countries during the 2014–2015 season, which is consistent with vaccine-driven selection within the H3N2 subtype. Overall, we find more support for vaccine-driven selection when large differences in vaccine effectiveness suggest a strong effect size. Variation in surveillance practices across countries could obscure signals of selection, especially when strain-specific differences in vaccine effectiveness are small. Further examination of the influenza vaccine’s evolutionary effects would benefit from improvements in epidemiological surveillance and reporting. View Full-Text
Keywords: strain replacement; indirect effects; universal vaccines strain replacement; indirect effects; universal vaccines
►▼ Show Figures 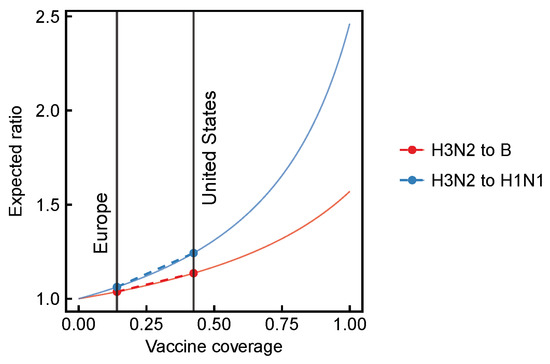