Disruption by SaCas9 Endonuclease of HERV-Kenv, a Retroviral Gene with Oncogenic and Neuropathogenic Potential, Inhibits Molecules Involved in Cancer and Amyotrophic Lateral Sclerosis
Next Article in Special Issue

Phaeoviral Infections Are Present in Macrocystis, Ecklonia and Undaria (Laminariales) and Are Influenced by Wave Exposure in Ectocarpales
Previous Article in Special Issue

Bacteriophage (phage) therapy is a promising alternative to antibiotics for the treatment of bacterial pathogens, including Clostridium difficile. However, as for many species, in C. difficile the physical interactions between phages and bacterial cells have not been studied in detail. The initial interaction, known as phage adsorption, is initiated by the reversible attachment of phage tail fibers to bacterial cell surface receptors followed by an irreversible binding step. Therefore binding can dictate which strains are infected by the phage. In this study, we investigated the adsorption rates and irreversible binding of three C. difficile myoviruses: CDHM1, CDHM3 and CDHM6 to ten strains that represent ten prevalent C. difficile ribotypes, regardless of their ability to infect. CDHM1 and CDHM3 phage particles adsorbed by ~75% to some strains that they infected. The infection dynamics for CDHM6 are less clear and ~30% of the phage particles bound to all strains, irrespective of whether a successful infection was established. The data highlighted adsorption is phage-host specific. However, it was consistently observed that irreversible binding had to be above 80% for successful infection, which was also noted for another two C. difficile myoviruses. Furthermore, to understand if there is a relationship between infection, adsorption and phage tail fibers, the putative tail fiber protein sequences of CDHM1, CDHM3 and CDHM6 were compared. The putative tail fiber protein sequence of CDHM1 shares 45% homology at the amino acid level to CDHM3 and CDHM6, which are identical to each other. However, CDHM3 and CDHM6 display differences in adsorption, which highlights that there is no obvious relationship between putative tail fiber sequence and adsorption. The importance of adsorption and binding to successful infection is often overlooked, and this study provides useful insights into host-pathogen interactions within this phage-pathogen system. View Full-Text
Keywords: Clostridium difficile; phage adsorption; phage tail fibers; phage-host interactions Clostridium difficile; phage adsorption; phage tail fibers; phage-host interactions
►▼ Show Figures 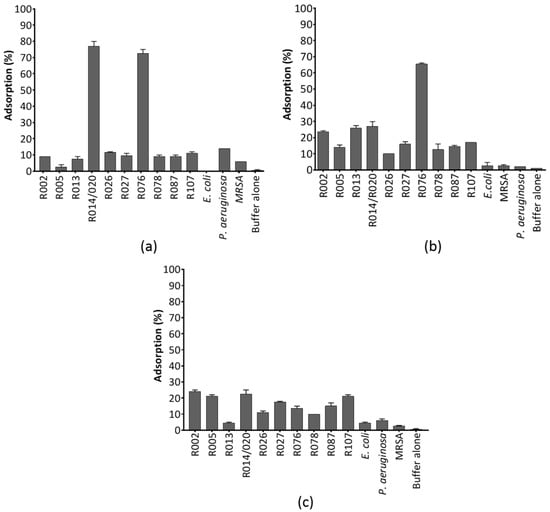