The Human Cytomegalovirus, from Oncomodulation to Oncogenesis

Besides its well-described impact in immunosuppressed patients, the role of human cytomegalovirus (HCMV) in the pathogenesis of cancer has been more recently investigated. In cancer, HCMV could favor the progression and the spread of the tumor, a paradigm named oncomodulation. Although oncomodulation could account for part of the protumoral effect of HCMV, it might not explain the whole impact of HCMV infection on the tumor and the tumoral microenvironment. On the contrary cases have been reported where HCMV infection slows down the progression and the spread of the tumor. In addition, HCMV proteins have oncogenic properties per se, HCMV activates pro-oncogenic pathways in infected cells, and recently the direct transformation of cells following HCMV infection has been described, which gave rise to tumors when injected in mice. Thus, beyond the oncomodulation model, this review will assess the direct transforming role of HMCV-infected cells and the potential classification of HCMV as an oncovirus. View Full-Text
Keywords: HCMV; cancer; CTH cells; oncomodulation; oncovirus HCMV; cancer; CTH cells; oncomodulation; oncovirus
►▼ Show Figures 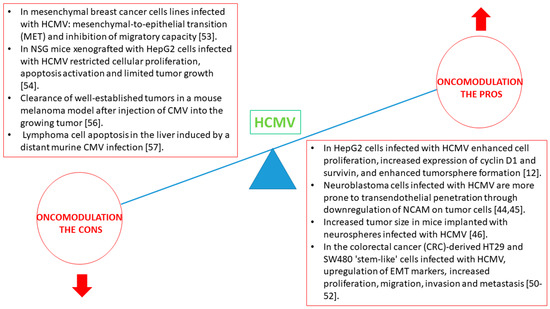