A novel virus with distinct genome features was discovered by high throughput sequencing in a symptomatic blackcurrant plant. The virus, tentatively named Ribes americanum virus A (RAVA), has distinct genome organization and molecular features bridging genera in the order Tymovirales. The genome consists of 7106 nucleotides excluding the poly(A) tail. Five open reading frames were identified, with the first encoding a putative viral replicase with methyl transferase (MTR), AlkB, helicase, and RNA dependent RNA polymerase (RdRp) domains. The genome organization downstream of the replicase resembles that of members of the order Tymovirales with an unconventional triple gene block (TGB) movement protein arrangement with none of the other four putative proteins exhibiting significant homology to viral proteins. Phylogenetic analysis using replicase conserved motifs loosely placed RAVA within the Betaflexiviridae. Data strongly suggest that RAVA is a novel virus that should be classified as a species in a new genus in the Betaflexiviridae or a new family within the order Tymovirales. View Full-Text
Keywords: Betaflexiviridae; blackcurrant; Ribes americanum virus A; characterization; detection Betaflexiviridae; blackcurrant; Ribes americanum virus A; characterization; detection
►▼ Show Figures 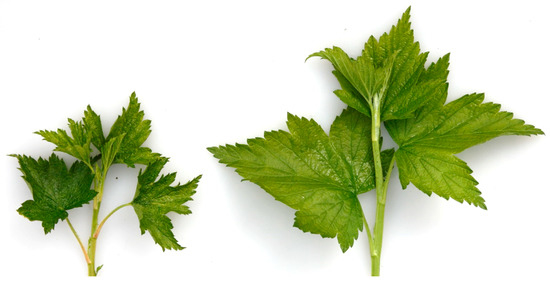