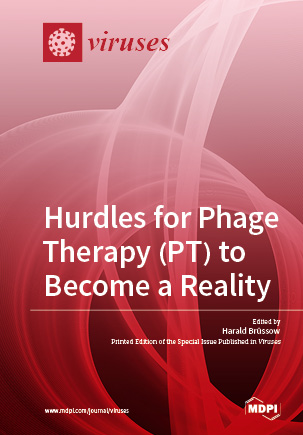 Foodborne illnesses remain a major cause of hospitalization and death worldwide despite many advances in food sanitation techniques and pathogen surveillance. Traditional antimicrobial methods, such as pasteurization, high pressure processing, irradiation, and chemical disinfectants are capable of reducing microbial populations in foods to varying degrees, but they also have considerable drawbacks, such as a large initial investment, potential damage to processing equipment due to their corrosive nature, and a deleterious impact on organoleptic qualities (and possibly the nutritional value) of foods. Perhaps most importantly, these decontamination strategies kill indiscriminately, including many—often beneficial—bacteria that are naturally present in foods. One promising technique that addresses several of these shortcomings is bacteriophage biocontrol, a green and natural method that uses lytic bacteriophages isolated from the environment to specifically target pathogenic bacteria and eliminate them from (or significantly reduce their levels in) foods. Since the initial conception of using bacteriophages on foods, a substantial number of research reports have described the use of bacteriophage biocontrol to target a variety of bacterial pathogens in various foods, ranging from ready-to-eat deli meats to fresh fruits and vegetables, and the number of commercially available products containing bacteriophages approved for use in food safety applications has also been steadily increasing. Though some challenges remain, bacteriophage biocontrol is increasingly recognized as an attractive modality in our arsenal of tools for safely and naturally eliminating pathogenic bacteria from foods. View Full-Text
Keywords: bacteriophages; phages; food safety; foodborne illness bacteriophages; phages; food safety; foodborne illness
This is an open access article distributed under the Creative Commons Attribution License which permits unrestricted use, distribution, and reproduction in any medium, provided the original work is properly cited