Hepatitis delta virus (HDV) is currently only found in humans and is a satellite virus that depends on hepatitis B virus (HBV) envelope proteins for assembly, release, and entry. Using meta-transcriptomics, we identified the genome of a novel HDV-like agent in ducks. Sequence analysis revealed secondary structures that were shared with HDV, including self-complementarity and ribozyme features. The predicted viral protein shares 32% amino acid similarity to the small delta antigen of HDV and comprises a divergent phylogenetic lineage. The discovery of an avian HDV-like agent has important implications for the understanding of the origins of HDV and sub-viral agents.
Keywords: co-evolution; dabbling duck; hepatitis D virus; phylogeny co-evolution; dabbling duck; hepatitis D virus; phylogeny

Hepatitis delta virus (HDV) is a human-specific pathogen and the sole member of the genus Deltavirus. The HDV genome is unique among known animal viruses but shares similarities with plant sub-viral pathogens named viroids [1,2]. The single stranded, circular RNA genome of HDV is approximately 1700 nucleotides and is therefore the smallest virus infecting mammals. It is ~70% self-complimentary and forms a highly base-paired rod-like structure. It encodes two proteins (small and large delta antigen, S-HDAg, and L-HDAg, respectively) from a single open reading frame. HDV is regarded as a sub-viral pathogen that requires the envelope proteins from the helper hepatitis B virus (HBV) for assembly and release, and subsequently for entry into the host cell [2].
In humans, coinfection with HDV and HBV causes more severe liver disease than is seen in individuals infected with HBV alone, and 15–20 million individuals are estimated to be co-infected with both viruses [3,4]. There are currently eight broad clades, or genotypes, of HDV that have specific geographic distributions [5,6]. Despite the importance of HDV, its origin is unknown and has been the source of debate [6,7,8]. Current hypotheses for the origin of HDV reflect the fact that this virus is currently only found in humans and include: Viroid-like RNA having captured host signalling mRNAs [9], direct origination from the human transcriptome [10], or evolution from a circular host RNA [1,11]. Given the dependence of HDV on the HBV envelope proteins to complete its life cycle and to generate infectious virions it is possible that there been co-evolution between HDV and the helper HBV, although the nature of this relationship has been largely unexplored.
In this study we describe a divergent HDV-like agent found in wild birds and in the absence of detectable duck HBV (DHBV). We demonstrate a number of features shared between HDV and this avian HDV-like agent that are strongly suggestive of common ancestry. This finding has important ramifications for our understanding of both the origin and the co-evolutionary relationships of sub-viral agents and helper viruses.

Contigs were assembled, identified, and abundance calculated as per Shi et al. 2016 [12]. Briefly, sequence reads were demultiplexed and trimmed with Trimmomatic followed by de novo assembly using Trinity [13]. No filtering of host/bacterial reads was performed before assembly. All assembled contigs were compared to the entire non-redundant nucleotide (nt) and protein (nr) database using blastn and Diamond blast [14], respectively, setting an e-value threshold of 1 × 10−10 to remove potential false positives. Abundance estimates for all contigs were determined using the RSEM (RNA-Seq by Expectation-Maximization) algorithm implemented in Trinity. All contigs that returned blast hits with paired abundance estimates were filtered to remove all bacterial and host sequences. The virus list was further filtered to remove viruses with invertebrate [12], plant, or bacterial host association using the Virus-Host database (http://www.genome.jp/virushostdb/).
To compare the viral abundance to that found in the host, a blast database was created containing Ribosomal Protein S13 (RPS13) from both Mallard (taxid: 8839) and Chicken (Gallus gallus) (taxid: 9031), which has been found to be stably expressed in the Mallard (Anas playrhynchos) lower gastrointestinal tract [15].

Contigs greater than 1000 bp in length were inspected (Geneious R10). Virus reads were mapped back to the HDV-like contig using the Geneious mapping function to corroborate the contig sequence and to calculate read coverage. Open reading frames were predicted within Geneious and interrogated using the conserved domain database (CDD, https://www.ncbi.nlm.nih.gov/Structure/cdd/wrpsb.cgi), with an expected value threshold of 1 × 10−5 We further utilised the HHpred tool [16] available on the MPI Bioinformatics Toolkit platform (https://toolkit.tuebingen.mpg.de/#/tools/hhpred) for additional homology detection and structure prediction. Reference sequences of Hepatitis D representing all eight major clades were downloaded from GenBank. The translation of the HDAg proteins were aligned using MAFFT [17] and gaps trimmed using trimAL (removing gaps that occur in more than 20% of sequences or with a similarity scores lower than 0.005, unless this removes more than 40% of columns) [18]. Maximum likelihood trees were estimated using PhyML 3.0 [19], incorporating the best-fit amino acid substitution model, here JTT + G + F, with 1000 bootstrap replicates using the Montpellier Bioinformatics Platform (http://www.atgc-montpellier.fr/phyml/).
The avian HDV-like agent was subsequently interrogated for conserved features of human HDV. At the genomic level, GC content was calculated within Geneious using a sliding window of ten. To ascertain whether the circular genome folded into a classical unbranched rod structure we utilised a RNA folding algorithm implemented on the Mfold webserver [20]. The identification of the avian HDV-like agent ribozyme was performed in two phases. The TT2NE algorithm was first applied on the genomic and antigenomic ribozyme sequences of the reference HDV genome (GenBank accession X04451.1), and although the models inferred by TT2NE were inaccurate [21], their topologies were distinct and were used as references for screening. The free energy calculated for the HDV genomic and antigenomic ribozyme sequences were −47.35 kcal/mol and −36.70 kcal/mol, respectively. We screened incremental windows of 100 nt starting from the first position of the antigenome of the avian HDV-like agent, including the complementary genomic sequences, with the TT2NE algorithm to locate the potential ribozyme sequences. The incremental size was 50 nt from positions 1 to 500 of the genome sequence and then 10 nt from position 500. All inferred secondary structures that had free energy values similar to the reference models were further evaluated using PseudoViewer [22]. Coiled-coil structures of the ORF were identified using Multicoil [23], and polarity and hydrophobicity calculated within Geneious.

There are a number of hypotheses for the origin of HDV, including that viroid-like RNA captured host signalling mRNAs [9], that HDV originated directly from the human transcriptome [10], or evolved from a circular host RNA found in hepatocytes that was able to replicate [1,11]. A central component of these hypotheses is that HDV exists only in humans. However, the discovery of a related HDV-like genome in birds and snakes [25] with distinct similarities to the HDV genome, including self-complementarity and ribozyme folding, as well as clear differences (no ORF extension in the same frame downstream of the stop codon), suggests a divergent evolutionary pathway of HDV and HDV-like pathogens. The lack of DHBV in the metagenomics library is notable, and may be due to a number of factors such as: (a) DHBV is primarily a liver infection and therefore oropharyngeal/cloacal swabs are not the optimal sample for DHBV detection; (b) DHBV may have been suppressed by the avHDV-like agent, in the same way that HBV replication is inhibited by HDV, resulting in low HDBV viral load and a lack of detection by metagenomics; or (c) the avHDV-like agent does not depend on a hepadnavirus for the completion of its replication cycle. Hetzel et al., (2018) similarly reported the absence of hepadnavirus and also demonstrated the active replication of a snake HDV-like agent. This suggests that non-human HDV-like agents may use other viruses to obtain a lipid envelope to make infectious particles, which clearly merits additional study. As such, the discovery of the genome of an avian HDV-like agent has important implications for our understanding of both the origin and the co-evolutionary relationships of the sub-viral agents with helper viruses, including the dependence of HDV on the HBV envelope protein.

We are grateful to members of the Centre for Integrative Ecology at Deakin University for sample collection and Melbourne Water for logistical support. 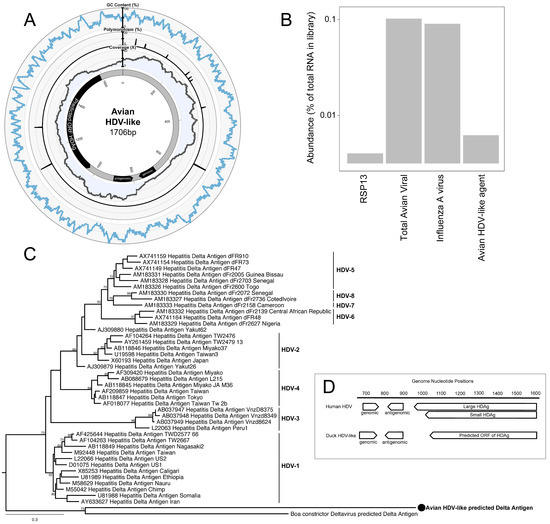 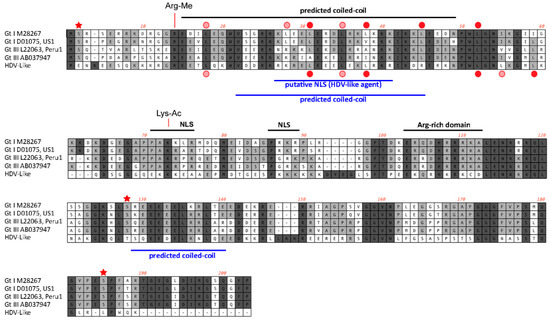 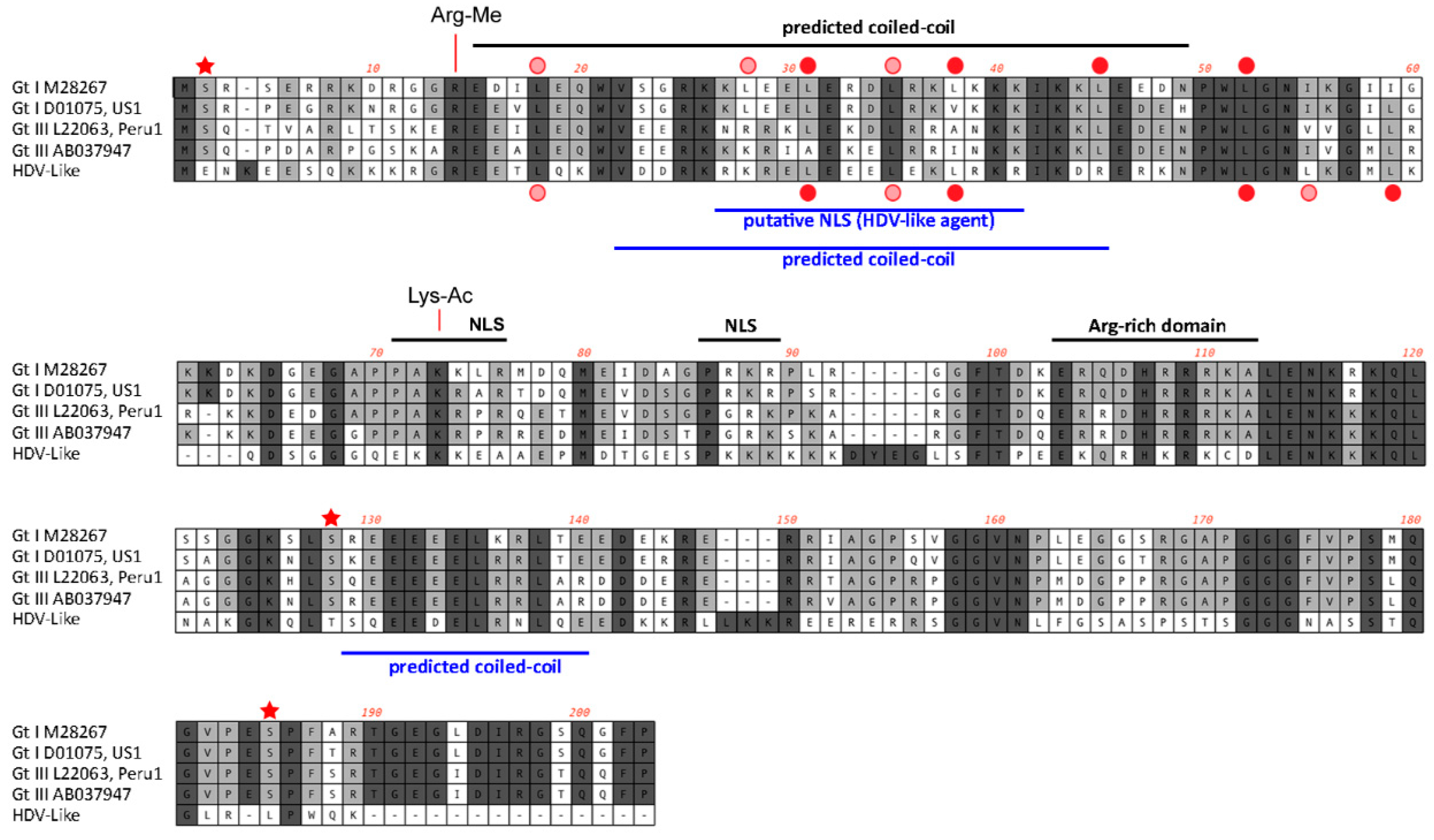