The Egyptian rousette bat (ERB) is the only known Marburg virus (MARV) reservoir host. ERBs develop a productive MARV infection with low viremia and shedding but no overt disease, suggesting this virus is efficiently controlled by ERB antiviral responses. This dynamic would contrast with humans, where MARV-mediated interferon (IFN) antagonism early in infection is thought to contribute to the severe, often fatal disease. The newly-annotated ERB genome and transcriptome have now enabled us to use a custom-designed NanoString nCounter ERB CodeSet in conjunction with RNA-seq to investigate responses in a MARV-infected ERB cell line. Both transcriptomic platforms correlated well and showed that MARV inhibited the antiviral program in ERB cells, while an IFN antagonism-impaired MARV was less efficient at suppressing the response gene induction, phenotypes previously reported for primate cells. Interestingly, and despite the expansion of IFN loci in the ERB genome, neither MARV showed specific induction of almost any IFN gene. However, we detected an upregulation of putative, unannotated ERB antiviral paralogs, as well as an elevated basal expression in uninfected ERB cells of key antiviral genes. View Full-Text
Keywords: transcriptomics; Egyptian rousette bat; Marburg virus; VP35 transcriptomics; Egyptian rousette bat; Marburg virus; VP35
►▼ Show Figures 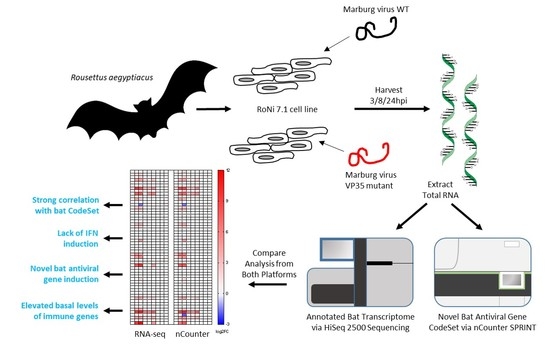