The hemlock woolly adelgid (HWA), Adelges tsugae, is an invasive pest of Tsuga spp. in eastern North America. Scymnus coniferarum is a predaceous beetle that was collected from HWA in the western United States. Limited knowledge of this insect in its native habitat led to studies to evaluate its potential for biological control of HWA. Seasonal abundance was sampled at six sites in Tacoma, WA, twice monthly, for one year on different host trees of potential adelgid prey. Tree species included Pseudotsuga menziesii, Pinus contorta, Pinus monticola, and Tsuga heterophylla. Scymnus coniferarum adults were found on all conifer species, except P. menziesii. Each conifer species supported a different adelgid species, suggesting S. coniferarum feeds on multiple adelgid species. More S. coniferarum were found on pine than hemlock. DNA barcoding of S. coniferarum found two distinct clusters that differed by 6% divergence. Beetles in each cluster were co-habiting the same conifer species, and they could not be distinguished morphologically. Further taxonomic studies are needed to understand the significance of DNA barcode sequence divergence. Because S. coniferarum was more frequently associated with pine adelgids than HWA, and because of remaining taxonomic uncertainty, S. coniferarum may not be suitable for HWA biological control. View Full-Text
Keywords: Adelges tsugae; HWA; Scymnus coniferarum; phenology; Washington Adelges tsugae; HWA; Scymnus coniferarum; phenology; Washington
►▼ Show Figures 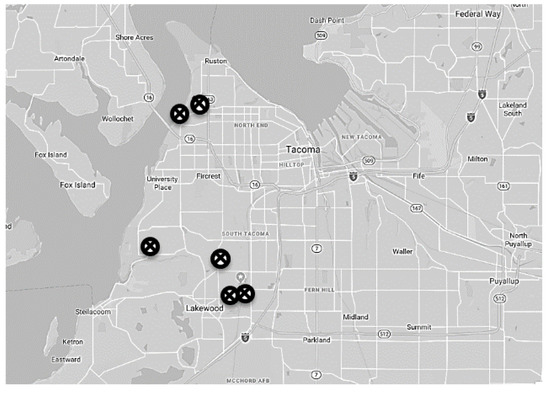