Growth of Pinus cembroides Zucc. in Response to Hydroclimatic Variability in Four Sites Forming the Species Latitudinal and Longitudinal Distribution Limits
Next Article in Special Issue

The forest structure of Phoenix’s park system is the amount and density of plants, the types of plants present (e.g., trees, shrubs, ground cover), the diversity of species, and tree health. The urban forest of Phoenix’s park system has an estimated 517,000 trees with a tree cover of 7.20%. Figure 2 illustrates the most common tree species growing in the park system. The top three species are Vachellia farnesiana (Sweet Acacia) (25.6%), Parkinsonia microphylla (Yellow Paloverde) (16.3%), and Prosopis velutina (Velvet Mesquite) (14.0%). The majority of trees growing within the park system had diameters less than 15.2 cm constituting 53.3% of the tree population (Figure 3). The overall tree density of the park system was 26.6 trees per ha (Table 2).
The urban forest is composed of a mix of native and exotic tree species. Thus, Phoenix’s park system has a tree diversity that is higher than surrounding native landscapes. In Phoenix’s park system, about 65% of the trees are species native to North America, while 56% are native to the state or the Lower Colorado River Valley ecosystem. Species exotic to North America make up 35% of the tree population. Most exotic tree species have an origin from North & South America (14% of the species) (Figure 4). Invasive plant species are often characterized by their vigor, ability to adapt, reproductive capacity, and general lack of natural enemies. These abilities enable them to displace native plants and make them a threat to natural areas [34]. None of the 12 tree species sampled in Phoenix’s park system is defined as invasive on the state invasive species list [35] (Table 3).

Ecosystem services are directly proportional to the total number of trees, species, percentage of tree canopy cover and healthy leaf surface area of the plant. The amount of forest cover is a critical cooling mechanism for both its shade and its evapotranspiration. In Phoenix, the three most dominant tree species in terms of leaf area are Vachellia farnesiana (Sweet Acacia), Eucalyptus camaldulensis (Red Gum Eucalyptus), and Ulmus parvifolia (Chinese Elm) (Table 4). Tree canopy covers about 7.2% of Phoenix’s park system. Importance values (IV) are calculated as the sum of relative leaf area and relative composition. An IV over 10 may indicate that the park system is over-reliant on a particular species for structural and functional benefits, depending on the local ecosystem [36]. Phoenix’s park system has four species with an IV exceeding 10, the most important of which is Sweet Acacia with an IV of 48.5. The 10 most important species within Phoenix’s park system are listed in Table 4.
Estimating land cover types of the urban park system is another important element to assess ecosystem services of those parks. Bare soil (43.2%) and turf grass (26.6%) are the two most dominant permeable land cover types in Phoenix’s park system (Table 5), which means that Phoenix can use its park system to strategically control and manage urban stormwater. The two impervious land cover classes (concrete/asphalt pavement and rock) make up a small percentage (15.4%) of the urban park system’s total land area (Table 5). The plantable space (not covered by impervious surfaces and free of existing tree canopy cover) represents a high percentage (64.1%) of the park system, which suggests that parks have a high potential for increasing Phoenix’s tree canopy cover. Phoenix has ample room to grow and expand its urban forest through its park system. As the tree canopy cover increases, this also provides other ecosystem services and benefits to local residents.

Trees within urban park systems can help improve air quality by directly removing pollutants from the air, reducing ambient air temperature through shade and transpiration, and reducing energy consumption in buildings through shade. This reduced energy consumption also reduces waste heat and air pollutant emissions from air conditioning units and power plants. Recent updates to the air quality models are based on improved leaf area index simulations, weather and pollution processing and interpolation, and updated pollutant monetary values. As shown in Figure 5, ozone (O3) had the greatest pollution removal value. Overall, 272 t of air pollutants (CO, NO2, O3, PM10, and SO2) were removed by trees within Phoenix’s park system with an annual value of $1.16 million. The urban park system is a critical component of Phoenix’s green infrastructure to enhance ecosystem and human health, thus promoting better quality of life for city residents.

Urban forests within urban park systems can help mitigate climate change by sequestering atmospheric carbon (from carbon dioxide) in tissue and by reducing energy use in buildings, and consequently lowering carbon dioxide emissions from fossil-fuel based power [37]. The gross sequestration of trees within Phoenix’s park system is about 3630 t of carbon per year (Table 6), with an associated value of $285,000. Net carbon sequestration (accounting for losses from carbon dioxide release through tree respiration) in green infrastructure is about 3380 t annually (Table 6). Trees store and sequester carbon dioxide through growth processes in their tissue. Carbon storage and carbon sequestration values are based on estimated or customized local carbon values. Carbon storage and carbon sequestration values in Phoenix are calculated based on $78 per metric ton [29].
Urban forests supported by Phoenix’s park system are estimated to store 57,800 t of carbon, which is valued at $4.53 million (Figure 6). Of all the species sampled, Eucalyptus camaldulensis Dehnh. (Red Gum Eucalyptus) stores and sequesters the most carbon (approximately 51.9% of the total carbon stored and 24.7% of all carbon sequestered in trees growing in parks) (Figure 6).

In Phoenix, the urban park system has two impervious ground cover classes (pavement and rock), which make up 15.4% of the total land cover in this category (Table 5) and has 7.2% of the tree canopy cover. The plantable space available on the urban park system is about 64.1%, which is high relative to other land covers [36]. Therefore, the urban park system has considerable additional capacity to reduce surface runoff if strategies are implemented within the system to capture stormwater in tree bioretention and infiltration beds. This suggests that Phoenix’s park system could be a more valuable ecological resource that can be strategically used to increase sustainability to extreme rainfall events through urban green stormwater infrastructure that simultaneously nurtures urban forests, including trees, shrubs and pervious land cover classes. For example, urban trees within park systems are highly beneficial in reducing surface runoff. Trees intercept precipitation, while their root systems promote infiltration and storage in the soil. Currently, it’s estimated that the trees growing in the City’s park system help to reduce runoff by an estimated 52,800 cubic meters a year, with an associated value of $124,000, as shown in Table 7 and Figure 7 [30].

Based on state-wide energy costs for Phoenix ($115.3 per MWH and $16.8 per MBTU), the trees growing within its park system were estimated to reduce energy-related costs from residential buildings by $106,000 annually. Trees also provided an additional $12,482 in value by reducing the amount of carbon released by fossil-fuel based power plants (a reduction of 159 t of carbon emissions) (Table 8 and Table 9).

This project addresses broader concepts of sustainability and health by assessing the ecosystem services generated by an urban park system in Phoenix, Arizona. The purpose of this study is to identify and demonstrate how land dedicated to urban park systems can nurture green infrastructure that provides ecosystem services including air pollution removal values, carbon sequestration and storage, avoided runoff, structural value, and energy saving for city residents in the city’s hot arid urban climate. The results of this study can be used to inform urban forest planning and management of green infrastructure in any bioclimatic region. It also promotes decision-making that will improve environmental quality and human health and well-being. This study captured the current urban forest structure of Phoenix’s park system and its numerous ecosystem services and benefits to Phoenix’s resident. The results of this research will support better planning and the management of the city’s green infrastructure and are expected to provide data to support the inclusion of trees in the green infrastructure within existing environmental regulations, as well as providing evidence of the valuable role trees play for improving the environment and enhancing both human health and the environmental quality of urban areas.

Dr. Gunwoo Kim developed research design, analyzed the data and wrote the manuscript. Dr. Paul Coseo provided some core advice and review of data and edit the paper. The authors have read and approved the final manuscript. 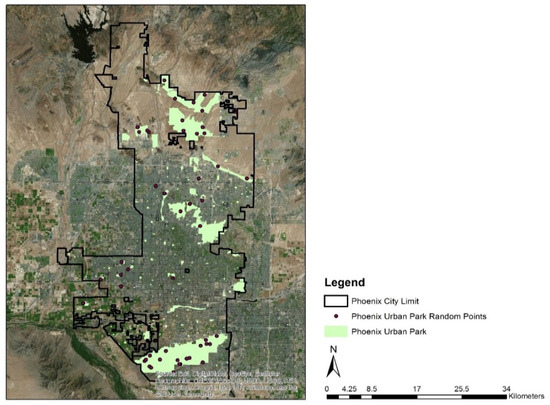 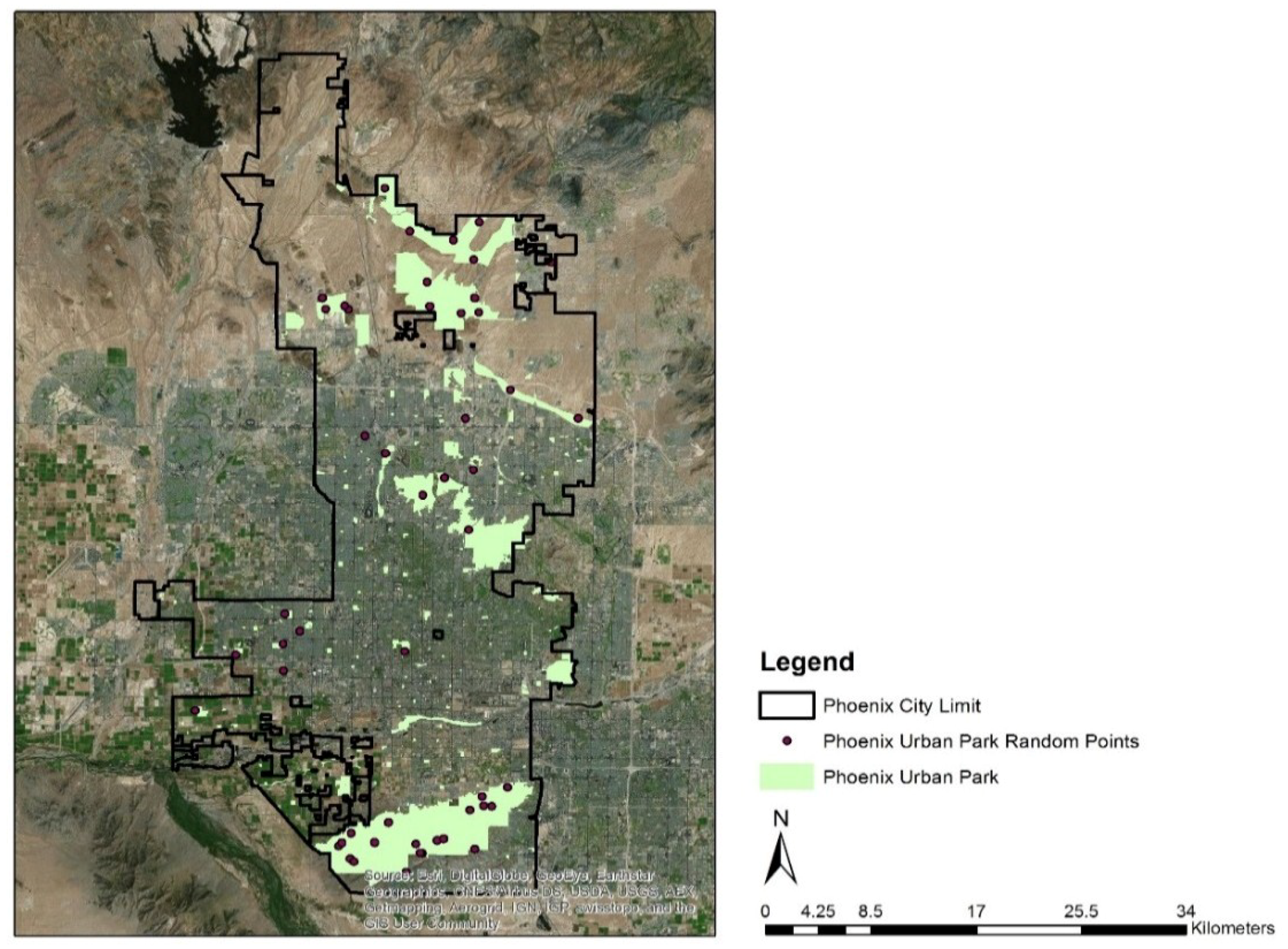 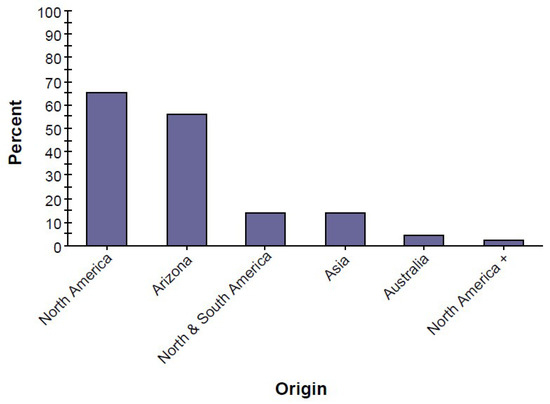 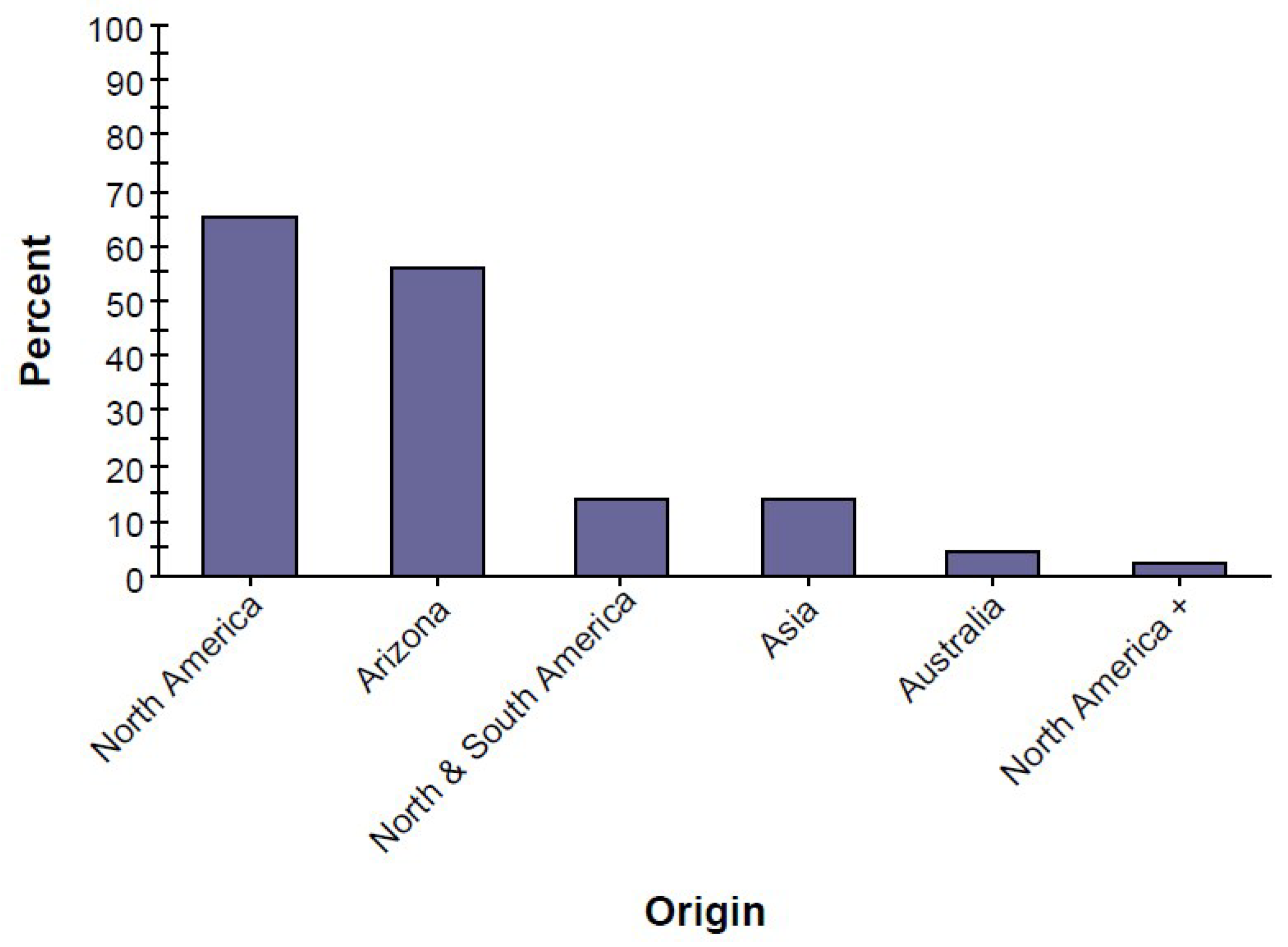 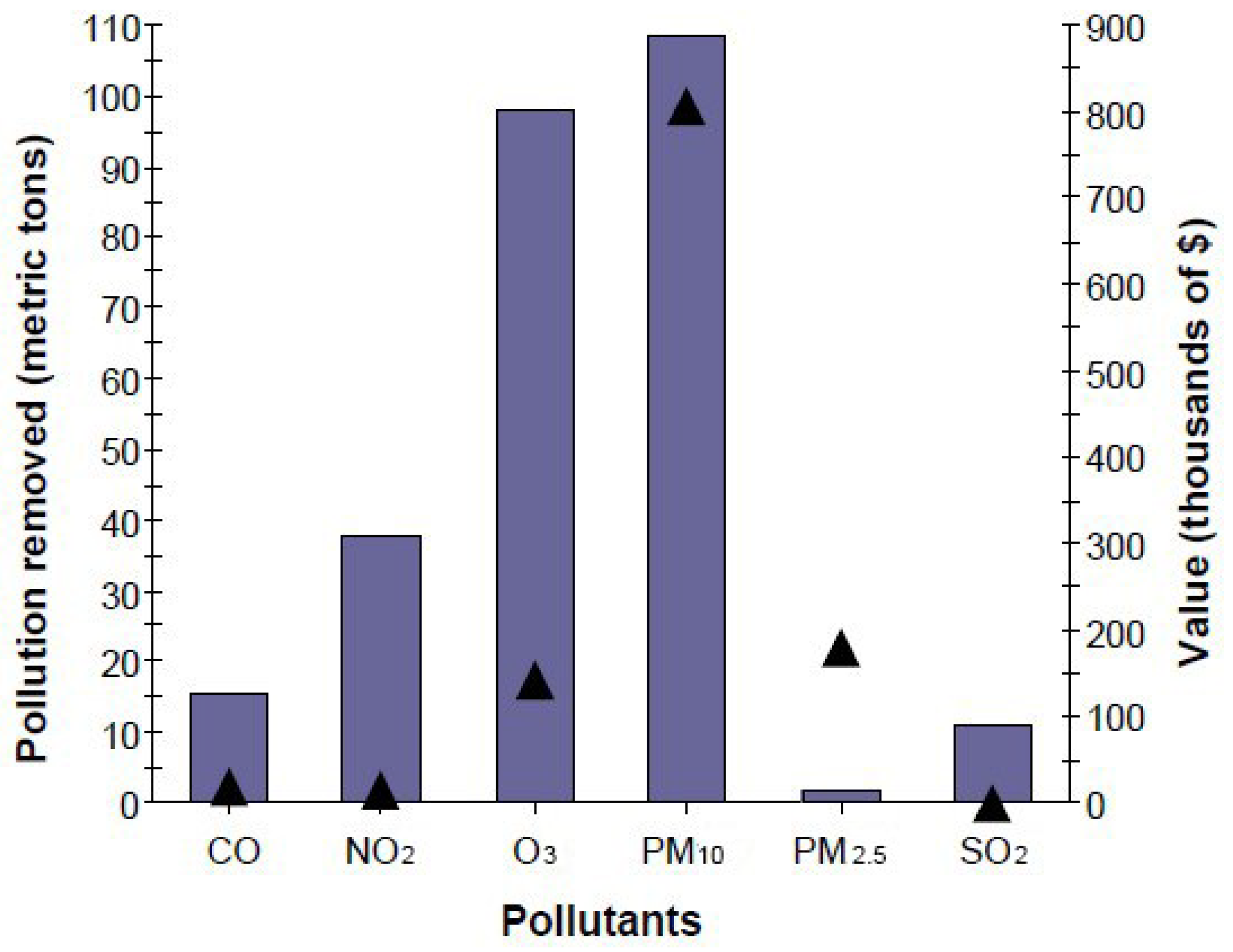 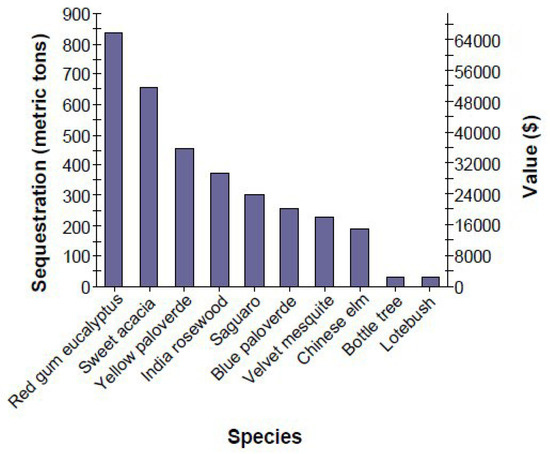