Species Diversity of Oak Stands and Its Significance for Drought Resistance

Drought periods have an adverse impact on the condition of oak stands. Research on different types of ecosystems has confirmed a correlation between plant species diversity and the adverse effects of droughts. The purpose of this study was to investigate the changes that occurred in an oak stand (Krotoszyn Plateau, Poland) under the impact of the summer drought in 2015. We used a method based on remote sensing indices from satellite images in order to detect changes in the vegetation in 2014 and 2015. A positive difference was interpreted as an improvement, whereas a negative one was treated as a deterioration of the stand condition. The Shannon-Wiener species diversity was estimated using an iterative principal component analysis (PCA) algorithm based on aerial images. We observed a relationship between the species indices of the individual forest divisions and their response to drought. The highest correlation between the index differences and the Shannon-Wiener indices was found for the Green Normalized Difference Vegetation Index (GNDVI) index (+0.74). In addition, correlations were observed between the mean index difference and the percentage shares in the forest divisions of species such as Pinus sylvestris L. (P. sylvestris) (+0.67 ± 0.08) and Quercus robur L. (Q. robur) (−0.65 ± 0.10). Our results lead us to infer that forest management based on highly diverse habitats is more suitable to meet the challenges in the context of global climatic changes, characterized by increasingly frequent droughts. View Full-Text
Keywords: drought; diversity; oaks; remote sensing drought; diversity; oaks; remote sensing
►▼ Show Figures 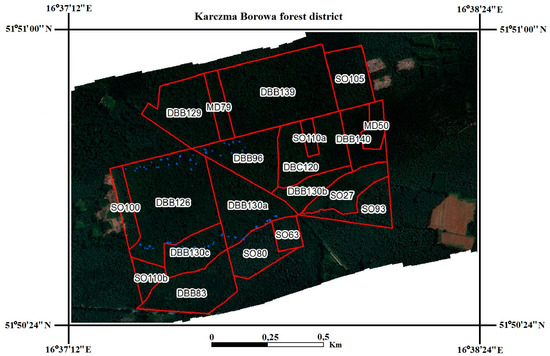