Responses of the Carbon Storage and Sequestration Potential of Forest Vegetation to Temperature Increases in Yunnan Province, SW China
Previous Article in Journal

Norway spruce dominates mountain forests in Europe. Natural variations in the mountainous coniferous forests are strongly influenced by all the main components of forest and landscape dynamics: species diversity, the structure of forest stands, nutrient cycling, carbon storage, and other ecosystem services. This paper deals with an empirical windthrow risk model based on the integration of logistic regression into GIS to assess forest vulnerability to wind-disturbance in the mountain spruce forests of Šumava National Park (Czech Republic). It is an area where forest management has been the focus of international discussions by conservationists, forest managers, and stakeholders. The authors developed the empirical windthrow risk model, which involves designing an optimized data structure containing dependent and independent variables entering logistic regression. The results from the model, visualized in the form of map outputs, outline the probability of risk to forest stands from wind in the examined territory of the national park. Such an application of the empirical windthrow risk model could be used as a decision support tool for the mountain spruce forests in a study area. Future development of these models could be useful for other protected European mountain forests dominated by Norway spruce. View Full-Text
Keywords: empirical modelling; forest disturbance; Norway spruce dominated forests; risk model; spatial analysis; windthrow empirical modelling; forest disturbance; Norway spruce dominated forests; risk model; spatial analysis; windthrow
►▼ Show Figures 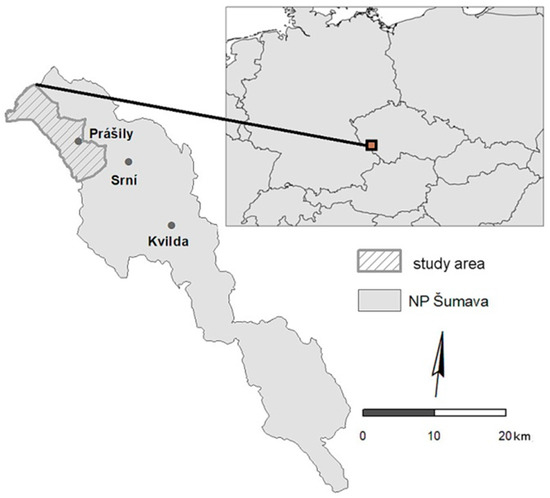