Comparison of Ecosystem Services from Mixed and Monospecific Forests in Southwest Germany: A Survey on Public Perception
Previous Article in Special Issue

Species distribution models have become some of the most important tools for the assessment of the impact of climatic change, and human activity, and for the detection of failure in silvicultural or conservation management plans. In this study, we modeled the potential distribution of 13 tree species of temperate forests distributed in the Mexican state Durango in the Sierra Madre Occidental, for three periods of time. Models were constructed for each period of time using 19 climate variables from the MaxEnt (Maximum Entropy algorithm) modelling algorithm. Those constructed for the future used a severe climate change scenario. When comparing the potential areas of the periods, some species such as Pinus durangensis (Martínez), Pinus teocote (Schiede ex Schltdl. & Cham.) and Quercus crassifolia (Bonpl.) showed no drastic changes. Rather, the models projected a slight reduction, displacement or fragmentation in the potential area of Pinus arizonica (Engelm.), P. cembroides (Zucc), P. engelmanni (Carr), P. leiophylla (Schl), Quercus arizonica (Sarg), Q. magnolifolia (Née) and Q. sideroxila (Humb. & Bonpl.) in the future period. Thus, establishing conservation and reforestation strategies in the medium and long term could guarantee a wide distribution of these species in the future. View Full-Text
Keywords: Bioclimatic niche; Durango; Mexican tree species; MaxEnt; non-parametric correlation Bioclimatic niche; Durango; Mexican tree species; MaxEnt; non-parametric correlation
►▼ Show Figures 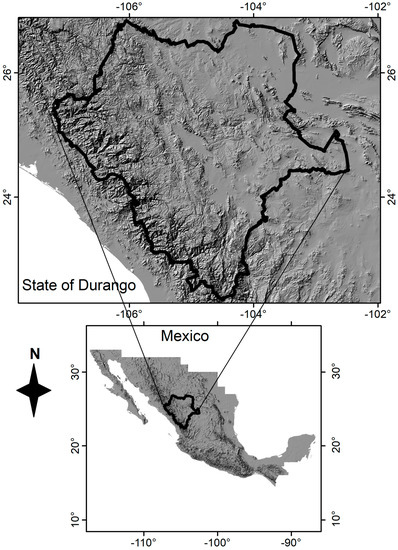