This study compares the quality of wood from two distinct sites in the Czech Republic—from former afforested agricultural land and forest land. We compared the properties of Norway spruce wood (Picea abies Karst.) and Scots pine wood (Pinus sylvestris L.), the most important domestic tree species, to Douglas fir (Pseudotsuga menziesii (Mirbel) Franco), a North American tree species and a potential substitute for the domestic spruce. Wood density, modulus of elasticity (MOE), modulus of rupture (MOR) and impact bending strength were the properties tested that were used for comparing tree species. Without taking into consideration the site, the highest density values from the tested tree species were obtained for Douglas fir (0.568 g·cm−3), followed by the pine (0.508 g·cm−3) and the spruce (0.463 g·cm−3). The Douglas fir also dominated in the remaining assessed properties, whilst the influence of site was not confirmed, with the exception of MOE and MOR, and only for the Douglas fir wood, wherein higher values were obtained for forest land. In terms assessed Douglas fir properties, it exceeds the domestic softwoods and represents a possible suitable replacement for them. The site only plays a role in terms of the Douglas fir, and only for certain properties. View Full-Text
Keywords: afforested farm land; Douglas fir; Norway spruce; Scots pine; wood properties; density; modulus of rupture afforested farm land; Douglas fir; Norway spruce; Scots pine; wood properties; density; modulus of rupture
►▼ Show Figures 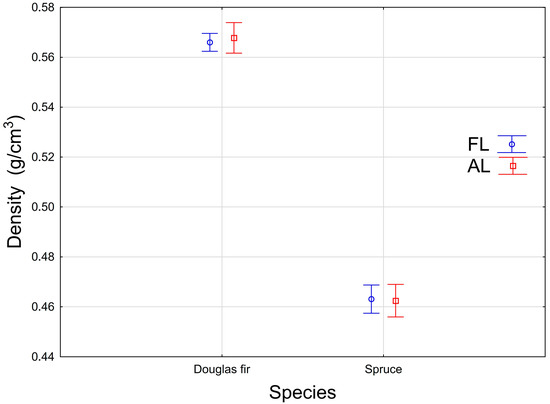