Fusarium circinatum, the causal of pine pitch canker disease (PPC), is now considered among the most important pathogens of Pinaceae in the world. Although in Europe PPC is only established in the Iberian Peninsula, the potential endangered areas cover over 10 million hectares under the current host distribution and climatic conditions. It is therefore a priority to test the susceptibility of those species and their provenances, within Central and Northern Europe and find biological control agents (BCAs) against the disease. In this study, the susceptibility of Pinus sylvestris, P. mugo and Picea abies Romanian provenances to F. circinatum was tested using three inoculum doses. In parallel, the potential use of Trichoderma atroviride and Trichoderma viride as BCAs against F. circinatum was also tested. This study has demonstrated, for the first time, the susceptibility of P. mugo to F. circinatum. Likewise, the susceptibility of P. abies was also confirmed. The fact that the Romanian provenance of P. sylvestris has not been susceptible to F. circinatum suggests genetic resistance as a potential tool to manage the disease. This, together with the apparent effectiveness of Trichoderma species as BCAs, seems to indicate that an integrated management of the disease might be feasible. View Full-Text
Keywords: pitch canker; Trichoderma; provenance; pathogenicity; biological control agent; resistance pitch canker; Trichoderma; provenance; pathogenicity; biological control agent; resistance
►▼ Show Figures 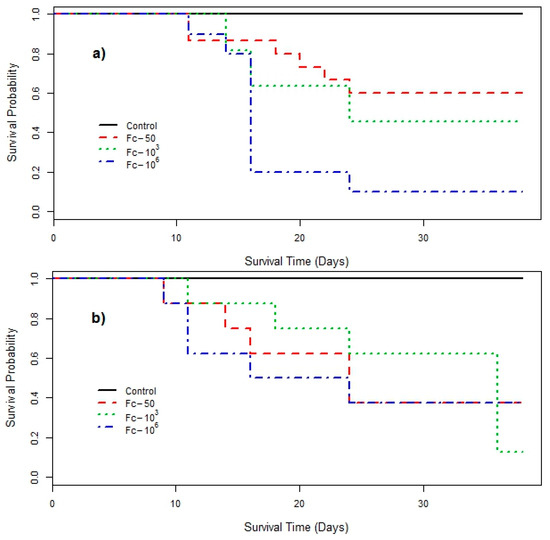