The airborne inoculum of Fusarium circinatum Nirenberg & O’Donnell, the fungal pathogen causing Pine Pitch Canker (PPC), is one of the main means of spread of the disease in forest stands and forest nurseries. Since this world-wide known pathogen was introduced in Europe, its biology in this newly infested area still remains scarcely known. To shed more light on this topic, we set up an experiment on a naturally PPC infested forest of Monterey pine in Galicia (NW Spain) with the following two goals: (i) to describe the seasonal spore dispersal pattern during one year of regular sampling and (ii) to assess the spatial spore dispersal pattern around the infested plot. Portable rotating arm spore traps were used and complemented with meteorological measurements. The abundance of F. circinatum spores in the samples was assessed by quantitative PCR (qPCR) with a hydrolysis probe. The results showed almost permanent occurrence of the air inoculum throughout the whole year, being detected in 27 of the 30 samplings. No clear temporal trends were observed, but a higher air inoculum was favoured by previous lower air temperatures and lower leaf wetness. Conversely, neither rainfall nor air humidity seemed to have any significant importance. The spatial spread of the inoculum was noted to be successful up to a distance of 1000 m in the wind direction, even with winds of just 5 m·s−1. Our study shows that rotating arm spore traps combined with qPCR may be an efficient tool for F. circinatum detection. View Full-Text
Keywords: pine pitch canker; Galicia; spore trap; air sampling; qPCR; seasonal dynamics pine pitch canker; Galicia; spore trap; air sampling; qPCR; seasonal dynamics
►▼ Show Figures 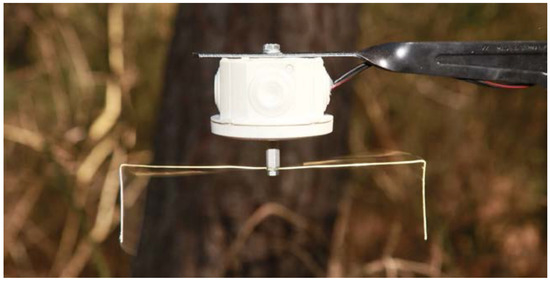