Red Alder-Conifer Stands in Alaska: An Example of Mixed Species Management to Enhance Structural and Biological Complexity
Next Article in Special Issue

Tree Height-Diameter Relationships in the Alpine Treeline Ecotone Compared with Those in Closed Forests on Changbai Mountain, Northeastern China

Height-diameter relationship is one of the most important stature characteristics of trees. It will change with climatic conditions because height and diameter growth displays different sensitivities to climatic factors such as temperature. Detecting and understanding changes in the stature of trees growing along altitudinal gradients up to their upper limits can help us to better understand the adaptation strategy of trees under global warming conditions. On Changbai Mountain in northeastern China, height-diameter datasets were collected for 2723 Erman’s birch (Betula ermanii Cham.) in the alpine treeline ecotone in 2006 and 2013, and for 888 Erman’s birch, spruce (Picea jezoensis Siebold & Zucc. Carr.), larch (Larix olgensis A. Henry), and fir (Abies nephrolepis Trautv. ex Maxim.) along an altitudinal gradient below the alpine treeline in 2006. These datasets were utilized to explore both changes in the stature of birch at the alpine treeline over time and variations in tree stature of different tree species across altitudes at a given time point (2006). Results showed that birch saplings (<140 cm in height) became stunted while birches with a height of >140 cm became more tapered in the alpine treeline ecotone. The stature of birch along the altitudinal gradient became more tapered from 1700 to 1900 m above see level (a.s.l.) and then became more stunted from 1900 to 2050 m a.s.l., with 1900 m a.s.l. being the altitudinal inflection point in this pattern. The treeline birch, due to its great temperature magnitude of distribution, displayed higher stature-plasticity in terms of its height-diameter ratio than the lower elevation species studied. The stature of birch is strongly modulated by altitude-related temperature but also co-influenced by other environmental factors such as soil depth and available water, wind speed, and duration and depth of winter snow cover. The high stature-plasticity of birch makes it fare better than other species to resist and adapt to, as well as to survive and develop in the harsh alpine environment. View Full-Text
Keywords: allometric growth; Betula ermanii; Erman’s birch; tree architecture; tree forms; tree stature; treeline allometric growth; Betula ermanii; Erman’s birch; tree architecture; tree forms; tree stature; treeline
►▼ Show Figures 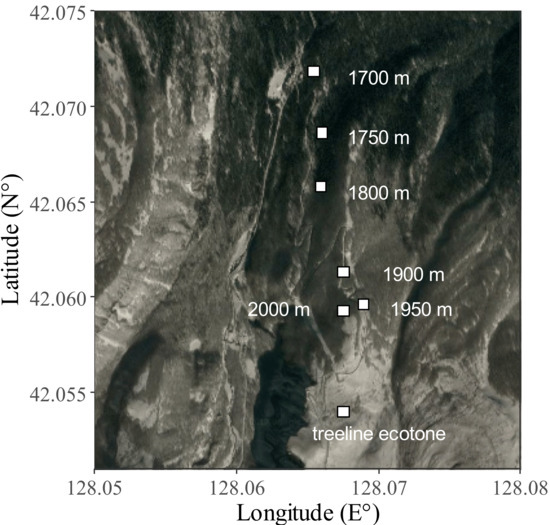