A total of 15 permanent sample plots 20 m × 30 m in size were established in the study area from 2002 to 2006. All trees in the plots were measured for diameter at breast height (DBH, cm), which was defined as 1.3 m above ground level; total tree height (HT, m) using a Vertex IV Ultrasonic Hypsometer (Haglöf, Sweden); and crown width (CW, m). All trees in the plots were divided into five intervals with the equivalent cumulative basal area for each interval with one average tree from each interval selected as the sample tree. Thus, a total of five trees were selected in each plot. Additionally, another average tree was selected from Plot 15 (Table 1). As a result, a total of 76 trees with healthy crowns were selected. Forty-six trees were selected from the Mengjiagang forest farm during the period of 2005–2006, and 30 trees were selected from the Hengtou Mountain forest farm in 2004. The attributes of the 15 sample plots are shown in Table 1.
DBH and CW were measured for all the sample trees before they were felled. A straight line was used to determine the azimuth of all the branches, and was marked from the ground to the height of the DBH on the northern side of the trunk and extended to the tree tip after the tree was felled. When the sample tree was felled, the total tree height was re-measured and the height to the first live branch of the whorl containing at least three branches (HBLC, m) was measured. In our study, the lowest whorl containing at least three branches was defined as the crown base. Thus, crown length (CL, m) was defined as CL = HT – HBLC. The trunk was divided by one-meter sections from the base of the trunk to the tree tip, and the smaller than one meter section remaining was recognized as the tree tip. Branch diameter (BD, mm), branch angle (VA, °), branch chord length (BC, cm), and absolute depth into the crown from the tree tip down to the branch basis (L, cm) were measured sequentially for all the branches from a specific section from the tree tip down to the crown base after the section was placed upright on the ground. For all branches, the branch radius (BR) was calculated as the product of its branch chord length and the sine of the branch angle, and the corresponding absolute distance into the crown (DINC, m) was the difference between the length from the tree tip to the branch base and the projection onto the trunk of the branches based on the trigonometric relationship. Relative distance into the crown radius of interest (RDINC) was defined as RDINC = DINC/CL. In our study, a total of 3658 branches were measured. The statistics of the sample trees and branches are listed in Table 2, and the branch variables are described in Figure 1. The branch with the largest crown radius from each whorl of all the sample trees was selected and was recognized as the whorl radius (WR). Thus, a total of 889 of the largest branches were selected.

2.3. Model Selection for the Crown Profile

The power-exponential equation is a special function in advanced mathematics. However, this function has not been used in the study of crown profile models. We analyzed the curve of this equation and changed the symbol of the parameter of the equation to make the curve reasonable to describe the outer crown profile of the planted Pinus sylvestris var. mongolica trees. The power-exponential equation is shown as Equation (1): where WR is the whorl radius of the crown based on the largest branches selected from each whorl; RDINC is the relative distance into the crown; and a1, a2, and a3 are the parameters to be estimated. To make the curve reasonable in describing the outer crown profile, the parameters should be restricted as a1 > 0, a2 > 0, and a3 < 0. By analyzing the relationship between the parameters and tree variables, DBH, CR, and HD were at last introduced into the equation and the model is finally defined as Equation (2): where a1–a5 are the model parameters to be estimated. DBH is the diameter at breast height, CR is the crown ratio, and HD is the ratio of tree height to DBH.
In addition, two other equations, the modified Kozak and simple polynomial equations (which have been used by other studies), were also used and compared in our study. The Kozak model was first introduced into the study of stem profile description, and was then modified to model the outer crown profile [11,15]. The modified Kozak equation is shown as Equation (3): where a1–a6 are the model parameters.
The simple polynomial equation was also used and compared in the present study, and is shown as Equation (4): where a1–a4 are the model parameters to be estimated.
Equations (2)–(4) were fitted by using all of the 889 largest branches, and Ra2, root mean square error (RMSE), and Akaike information criterion (AIC) were used to compare the goodness-of-fit of the three basic models. The mean error and mean absolute error for the upper crown, shade crown, and the total tree were calculated. The model with the largest Ra2, the smallest RMSE and AIC, the smallest mean error and mean absolute error was selected as the best model to develop the outer crown profile model.
The dummy variable approach based on the best equation selected was used to analyze the effects of stand age and stand density on the crown profile, respectively. All trees were divided into four groups (<20, 21–30, 31–40, 41–50) based on the stand age and four groups (<1000, 1001–2000, 2001–3000, >3000) based on the stand density.

The outer or outer contour of the exterior edges of the crown was used to characterize the crown profile of a standing tree [11]. Based on the selected equation that best modelled the crown profile, a specific quantile to model the outer crown profile was taken following the study of Gao et al. [11]. The quantile curves were fitted using all the branches by a series of quantiles, from 0.50 to 0.95 with an interval of 0.05 plus the value of 0.99. Three fixed effects (marginal) models with the same equation form were fitted to the entire dataset (the first marginal model), about half of the dataset (the second marginal model) after removing the non-positive residuals of the first marginal model, and about a quarter of the dataset (the third marginal model) of the whorl radius data after removing the non-positive residuals of the second marginal model. The quantile curve that was mostly adjacent to the third marginal model was selected to describe the outer contour of the exterior edges of the crown. This detailed information could be found in the study of Gao et al. [11].
The branches used to model the crown profile were nested into the tree and the correlation relationship between the branches needed to be explained. The quantile regression for linear mixed-effects models where the correlation between the branches within the individual trees was considered by including the random effects were introduced into the outer crown profile model. The Stochastic-Approximation of the EM Algorithm (SAEM) is used to perform the quantile regression for linear mixed-effects models. The d, p, q and r functions for the Asymmetric Laplace Distribution are defined in this model. To explain the hierarchical representation of the Asymmetric Laplace Distribution, exact maximum likelihood estimates of the fixed-effects and variance components is derived based on SAEM [42]. The general linear mixed-effects model is defined as Equation (5): where yij is the jth observation from the ith subject; is design matrix with the dimension of N × k; β is the fixed effects parameters with the dimension of k × 1; zij is the design matrix with the dimension of q × 1; and bi are the random effects with the dimension of q × 1. Thus, the qth quantile regression for linear mixed-effects model is written as Equation (6):
Akaike information criteria (AIC), Bayesian information criteria (BIC), log-likelihood (LL), and Hannan–Quinn information criterion (HQC) were used to evaluate the performance of the model. The model that had the smallest AIC, BIC, HQC, and the largest LL performed best. The functions are shown as Equations (7)–(9): where k is the number of parameters, and n is the number of observations. All of the analyses in our study were based on R software [43]. The qrLMM package was used to estimate the parameters of quantile regression for linear mixed-effects models [42]. The generally positive matrix was used to explain the variance-covariance matrix for the random effects parameters for the specific quantile. Statistical indices used to evaluate the marginal models and quantile regression models were R2, Var(εp), [E(εp)]2, predicted mean error (MEP), and predicted mean absolute error (MAEP); and the function can be found in Gao et al. [11]. Based on the results of the dummy variable approach, stand age and stand density were introduced into the quantile regression for the mixed-effects outer crown profile model to analyze the effect of stand variables on the crown profile.

3.3. Effect of Stand Age and Stand Density on the Crown Profile

This research was financially supported by the National Natural Science Foundation of China (31570626). The authors warmly thank Bi for his help in quantile regression and Galarza for his help in parameter estimation of quantile regression for linear mixed-effects model. The authors also thank the teachers and students of the Department of Forest Management, Northeast Forestry University (NEFU), China, who provided and collected the data for this study.

Yunxia Sun undertook data analysis, and wrote most of the paper. Huilin Gao helped with the data analysis and modified the paper. Fengri Li supervised and coordinated the research paper, designed and installed the experiment, took some measurements, and contributed to the writing of the paper. 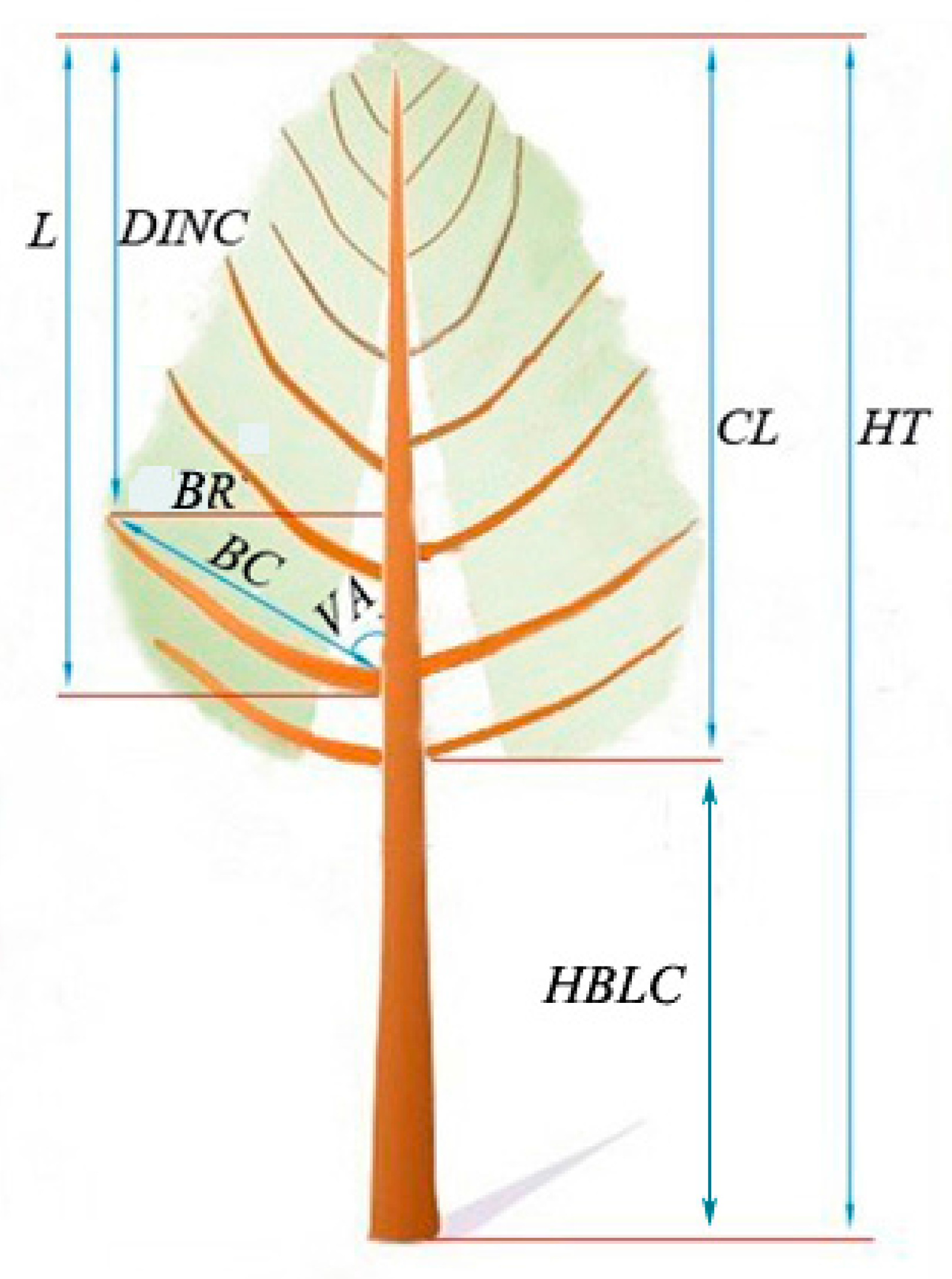 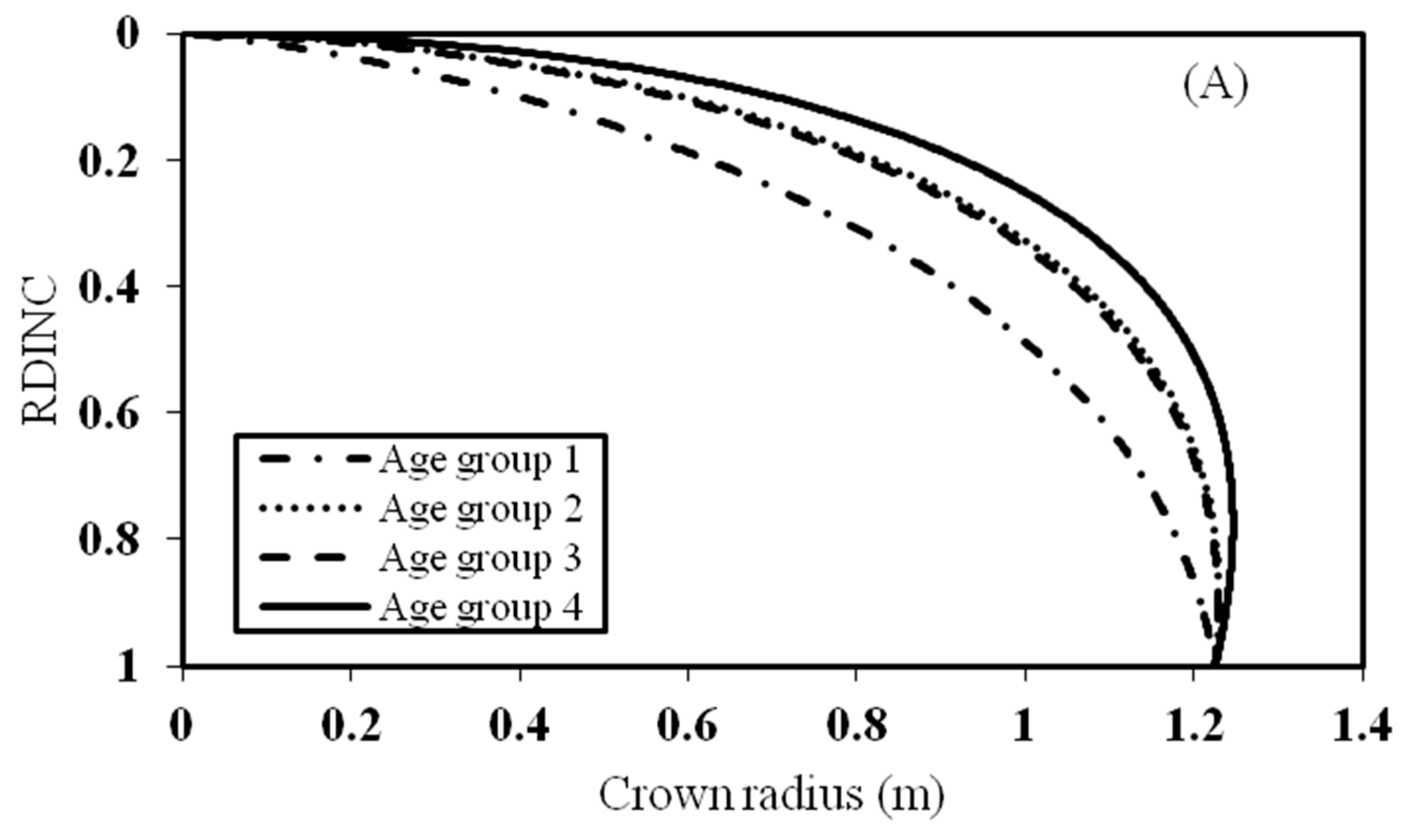 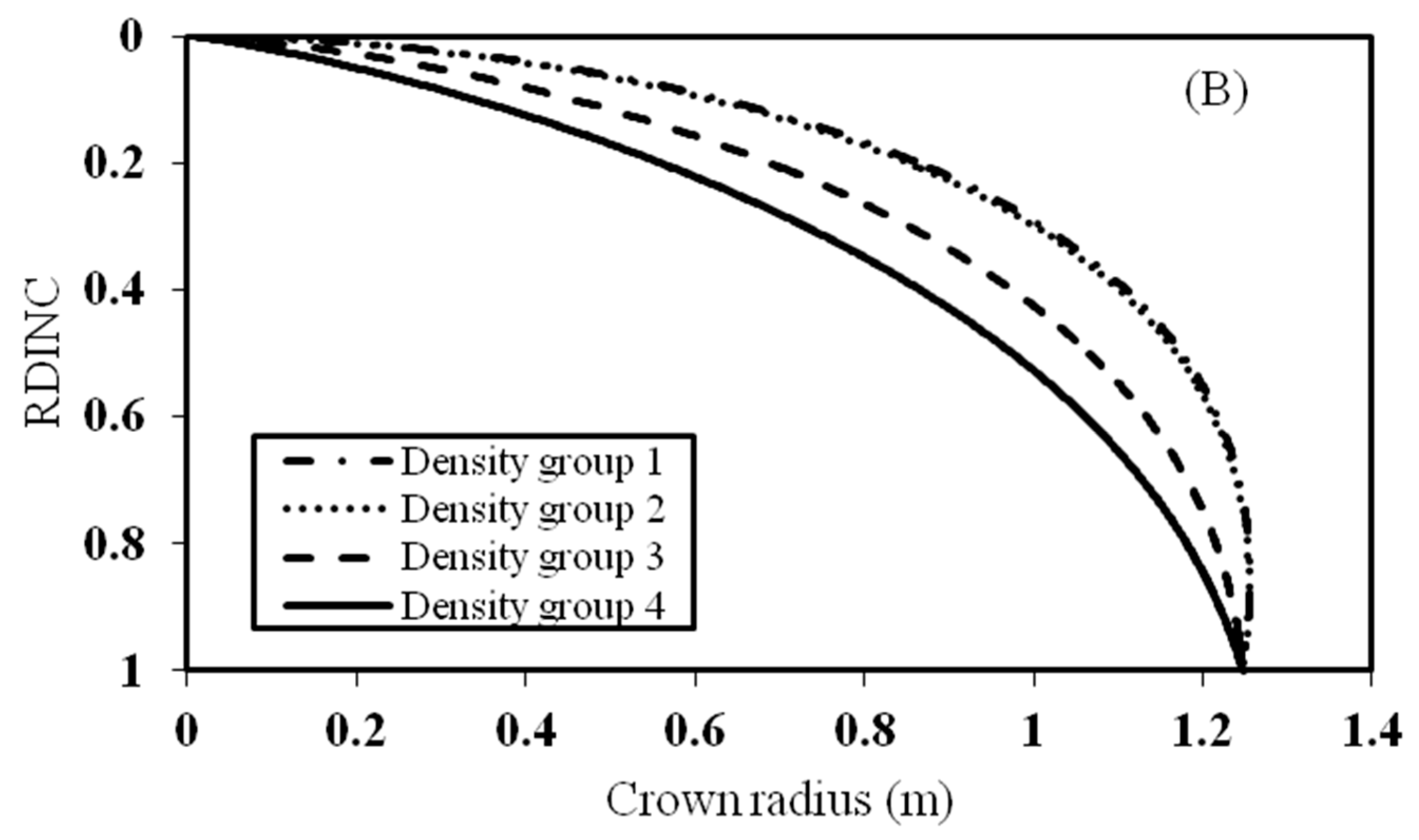 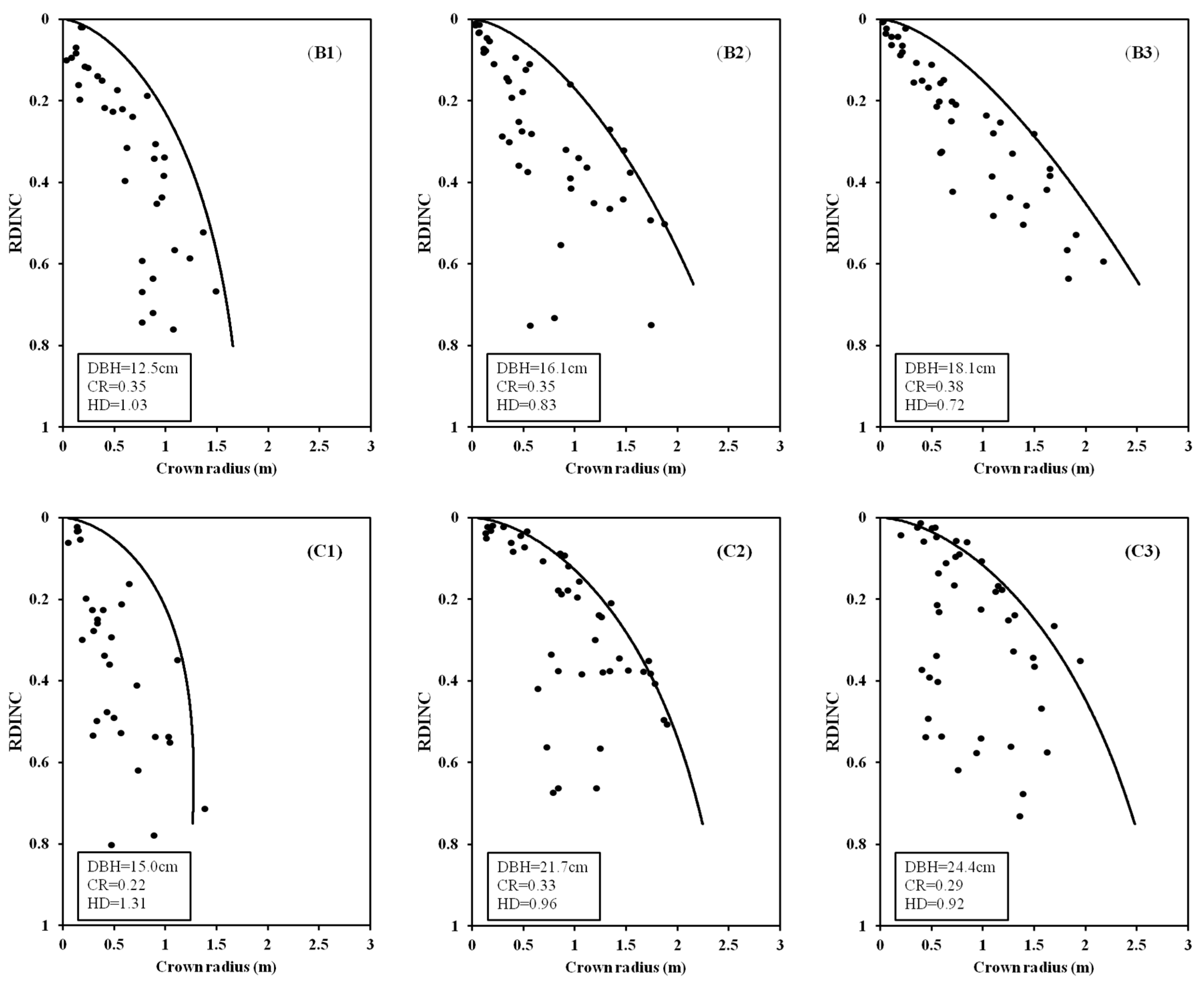 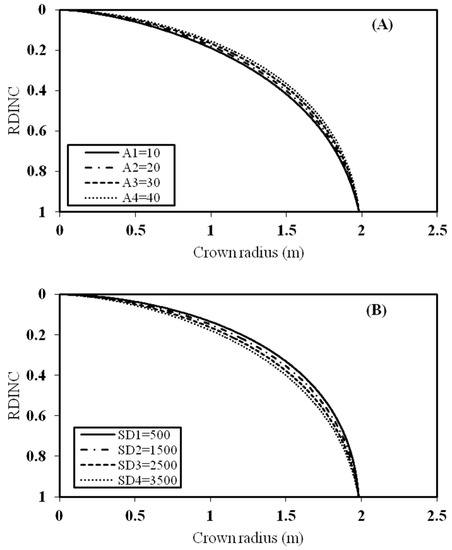 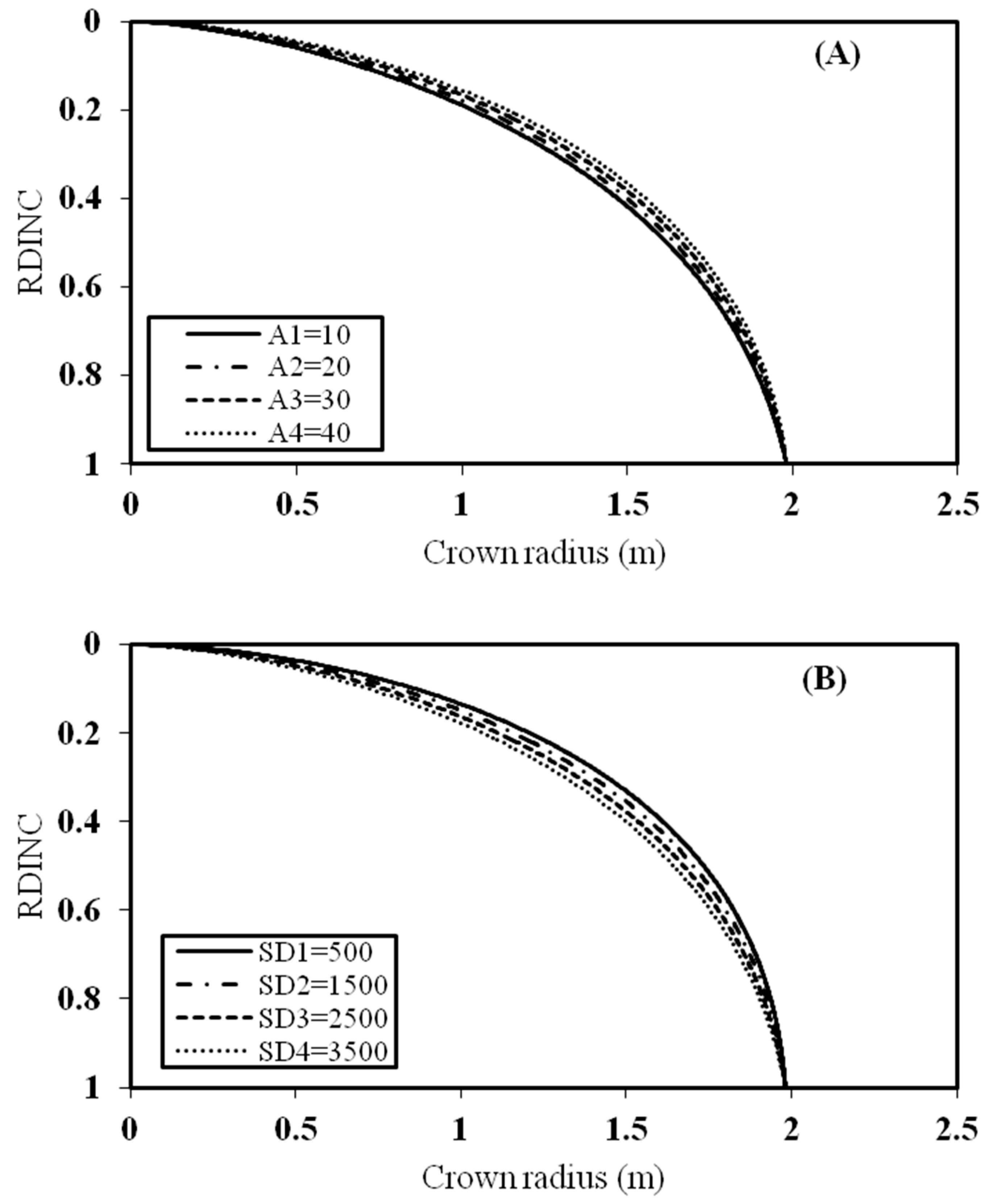 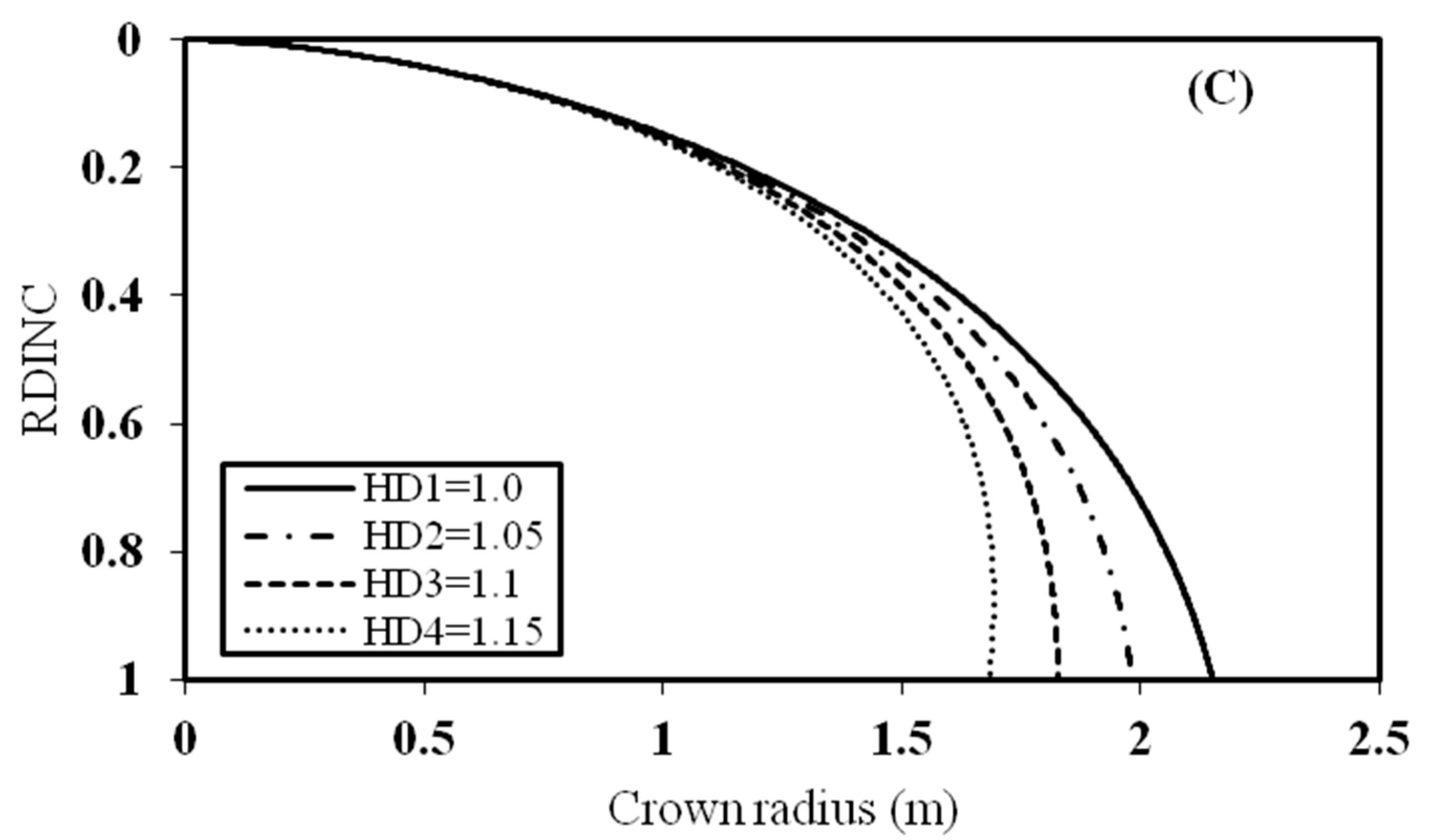