Wildfire often causes tremendous changes in ecosystems, particularly in subalpine and alpine areas, which are vulnerable due to severe climate conditions such as cold temperature and strong wind. This study aimed to clarify the effect of tree re-planting on ecosystem services such as the soil microbial community after several decades. We compared the re-planted forest and grassland with the mature forest as a reference in terms of soil microbial biomass C and N (Cmic and Nmic), enzyme activities, phospholipid fatty acids (PLFA) composition, and denaturing gradient gel electrophoresis (DGGE). The Cmic and Nmic did not differ among the grassland, re-planted forest and mature forest soil; however, ratios of Cmic/Corg and Nmic/Ntot decreased from the grassland to re-planted forest and mature forest soil. The total PLFAs and those attributed to bacteria and Gram-positive and Gram-negative bacteria did not differ between the re-planted forest and grassland soil. Principle component analysis of the PLFA content separated the grassland from re-planted forest and mature forest soil. Similarly, DGGE analysis revealed changes in both bacterial and fungal community structures with changes in vegetation. Our results suggest that the microbial community structure changes with the re-planting of trees after a fire event in this subalpine area. Recovery of the soil microbial community to the original state in a fire-damaged site in a subalpine area may require decades, even under a re-planted forest.
Keywords: wildfire; enzyme activities; microbial biomass; phospholipid fatty acid; reforestation; subalpine wildfire; enzyme activities; microbial biomass; phospholipid fatty acid; reforestation; subalpine

In forest ecosystems, fire alters the soil microbial community composition and activity in the form of direct heat-induced microbial mortality [1,2]. Furthermore, loss of forest by fire and grass invasion may alter nutrient cycling and quality of organic matter [3], which can indirectly affect the soil microbial community. Soil bacterial and fungal biomass is lower in fire-induced grassland areas than unaffected forest areas [4]. Post-fire tree replanting can accelerate the recovery of forest function in an ecosystem [5], thereby leading to greater recovery of the soil microbial community.
In Taiwan, grasslands are generally distributed above the tree line, at 3100 to 3400 m above sea level (asl). Approximately 50 years ago, a wildfire led to a vegetation shift from forest to grassland at Tatajia, the saddle (2600 to 2800 m asl) of Yushan, one of the highest mountains (3950 m) in East Asia. This region provides a unique environment for observing long-term ecological changes in vegetation succession in a subalpine area.
Soil microorganisms are critical for ecosystem function and contribute substantially to organic matter decomposition and maintenance of soil structure [6,7]. Fungi and bacteria often occupy separate ecological niches in the soil environment and play critical roles in nutrient cycling [8,9]. Microbial biomass increases quickly in the early forest succession stage and then decreases and remains at a constant level with long-term forest restoration [10]. Hedo et al. [11] reported that post-fire silvicultural treatment did not have a direct effect on soil microbial properties and soil enzyme activities. However, little is known about the response of microbial communities to the succession of vegetation after fire [12]. A decade after a forest fire in a tropical rainforest, the dominant soil bacteria and actinobacteria did not differ between unburnt and burnt areas [13]. On the other hand, with the construction of 16S rRNA gene clone libraries, the diversity of bacterial communities was significantly lower in planted or natural forest than in fire-induced grassland soil in subalpine area after 3 decades [14]. Soil microbial biomass, activity and microbial community may increase with vegetation succession.
Analysis of phospholipid fatty acids (PLFA) is useful for determining the active soil microbial community structure [15]. It provides quantitative data on microbial communities [16]. As another simple, rapid and molecular technique, denaturing gradient gel electrophoresis (DGGE) can provide information on dominant microbial species such as bacteria, fungi, and target groups by the use of different primers in the same soil DNA extract [17].
With the hypothesis that replanting of trees in a wildfire-induced grassland might enhance the recovery of microbial communities and function, we examined microbial activities, biomass and community structure in a subalpine forest ecosystem after a fire disturbance using PLFA and DGGE.

This study was conducted at Tatajia (23°28′ N, 120°54′ E) in central Taiwan, a subalpine area of Yushan (Mt. Jade). The site has an elevation 2600–2800 m, and mean annual precipitation of 4100 mm and mean annual temperature of 9.5 °C. The area is a long-term ecological study site of subalpine forest ecosystems in Taiwan. Soils are characterized as Humic Dystrudepts with low base saturation and strong acidity (pH 3.6–4.2) [18].
The study involved 3 vegetation types: grassland, re-planted forest, and natural forest. The study site was covered by natural hemlock and cypress forest before the wildfire. The grassland used as a control had formed from a wildfire event approximately 50 years ago in the forest area. The vegetation in the grassland included dwarf bamboo (Yushania niitakayamensis (Hayata) Keng f.) and alpine silver grass (Miscanthus transmorrisonensis Poaceae). The re-planted forest adjacent to the grassland plots was established by planting Pinus taiwanensis Hayata about 30 years ago. The Pinus plantation was weeded for three years in the early stage of establishment, after which no management was applied to the plantation. The non-disturbed natural forest used as a reference is dominated by Chinese hemlock (Tsuga chinensis (Franch.) Pritzel ex Diels.) with low density of Taiwan false cypress (Chamaecyparis formosensis Matsum.), spruce (Picea morrisonicola Hayata), and Armand’s pine (Pinus armandi Franch.). Natural and re-planted forest plots were separated by 200 m and were about 1 km away from grassland plots.
Each plot was demarcated into five subplots (50 × 50 m; replicates) for sampling. In each subplot, three samples were collected and mixed as a composite sample. The soil samples were collected in January 2010 and stored in an ice box for immediate transport to the laboratory. After removing undecomposed litter on the surface, soil samples were collected at 0–10 cm depth, which include a thin O horizon (Oa) and A horizon, using a metal auger (8 cm diam.). Visible detrital material, such as roots and litter, was hand-removed by sieving, and then the soil samples were ground to pass through a 2-mm sieve. Soil samples were stored at 4 °C in the dark before analysis within one month. Subsamples were frozen at −20 °C immediately after sampling for analysis of PLFA. Biochemical analyses, including microbial biomass and enzymatic activities, were completed using fresh samples within 1 month after field sample collection. Another subsample was air-dried for soil chemical analysis.

The first two PCA components explained 71.5% of the variability in the soil biochemical parameters. The first factor (PC axis 1), which explained 53.6% of the variance, was mainly positively associated with soil organic C, total N and enzymatic activities and negatively associated with soil pH, Cmic/Corg and Nmic/Ntot (Figure 1). The second factor (PC axis 2), which explained 19.7% of the variance, was associated with microbial biomass. The soil biochemical PCA plot (Figure 1a) separated the mature forest from the planted forest and grassland.
Soil microbial communities, as analyzed by the PCA of the PLFA levels, significantly differed among the three types of vegetation and could be divided into three clusters: mature forest, re-planted forest and grassland. The first and second principal components (PC1, PC2) accounted for 70% of the PLFA variability (Figure 2). The PC1 differentiated the mature forest from the other vegetation, and PC2 differentiated the grassland from the re-planted forest. High positive loadings for G+ bacteria (i15:0, a15:0, i16:0, 10Me16:0 and 10Me17:0), high negative loadings for G− bacteria (cy17:0 and 18:1ω7c), and positive loading for fungi (18:2ω6c) contributed to the separation of the mature forest from other types of vegetation along the PC1 axis.

Dendrograms of genetic similarity obtained by DGGE of bacterial communities in the soil samples clustered differently for different types of vegetation (Figure 3). For soil bacterial communities, the re-planted forest and grassland were in one group, whereas in the other group was the mature forest.
Similarly, cluster analysis of fungal communities showed two main clusters for the three types of vegetation (Figure 4). Re-planted forest and grassland soil clustered together, being separate from the mature forest soil.

Our results suggest substantial changes in microbial community structure with the re-planting of tress in a wildfire-induced grassland. The plantation changed the fraction of the labile form of SOM, with a decrease in the ratio of Cmic/Corg in the re-planted forest soil. Microbial biomass (PLFA content) increased from the grassland to the re-planted forest soil, accompanied by increases in fungi and VAM fungi but not the bacterial content. The shift in vegetation with the succession of the fire-induced grassland to the forest led to an increased ratio of G+/G− bacteria. DGGE cluster analysis revealed changes in bacterial and fungal community structure associated with the Pinus plantation. Therefore, the planting of trees 30 years ago after a fire in a subalpine area changed the soil microbial activities and community structure, but recovery of the soil microbial community to the original state may need much more time. 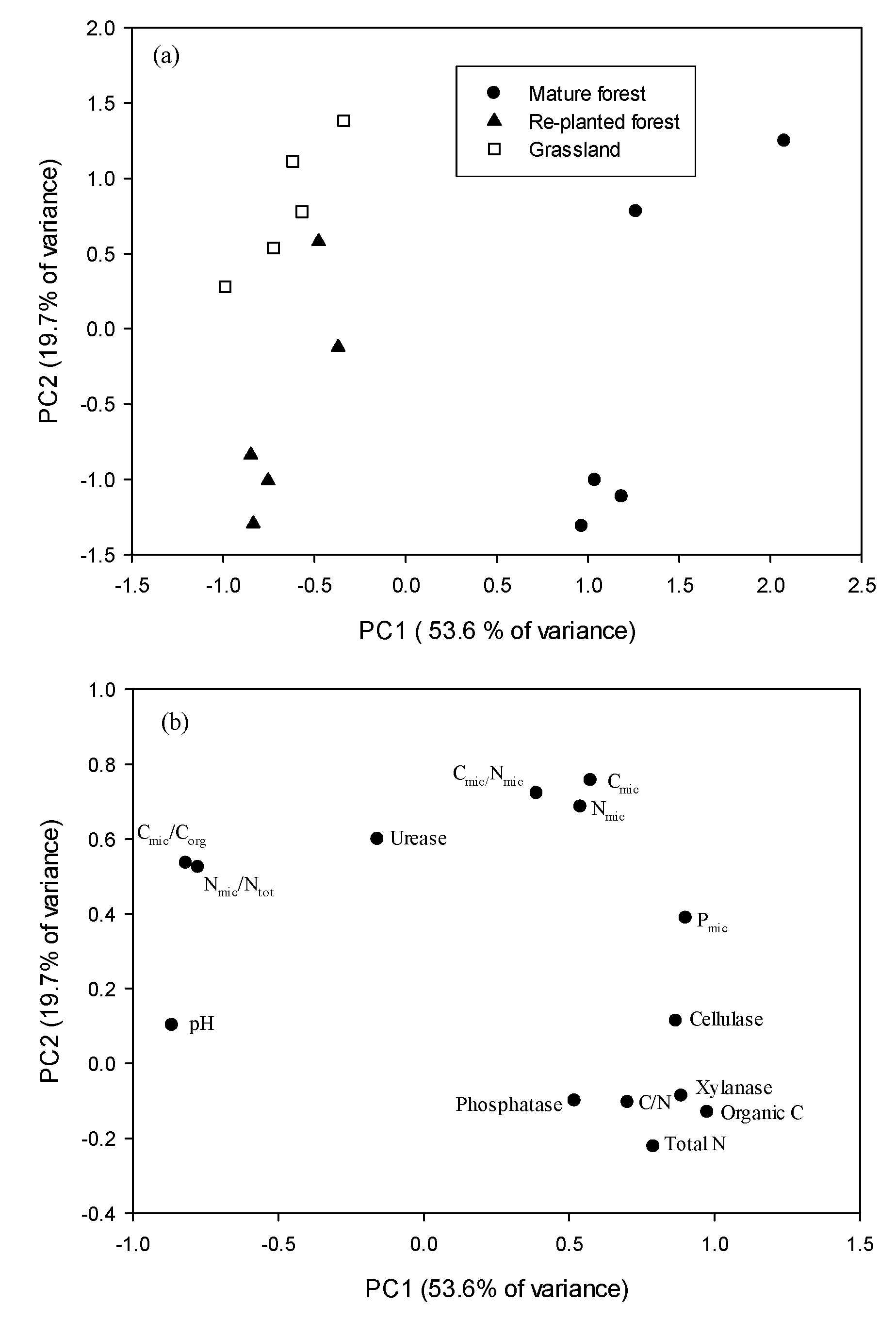 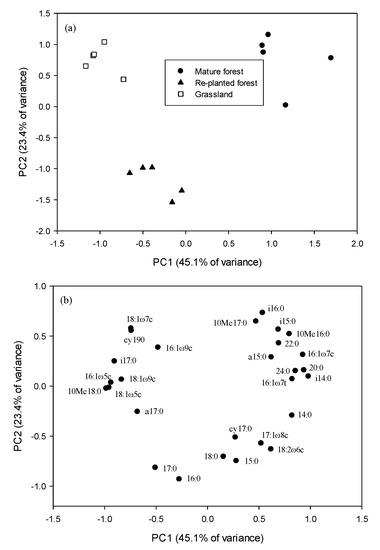 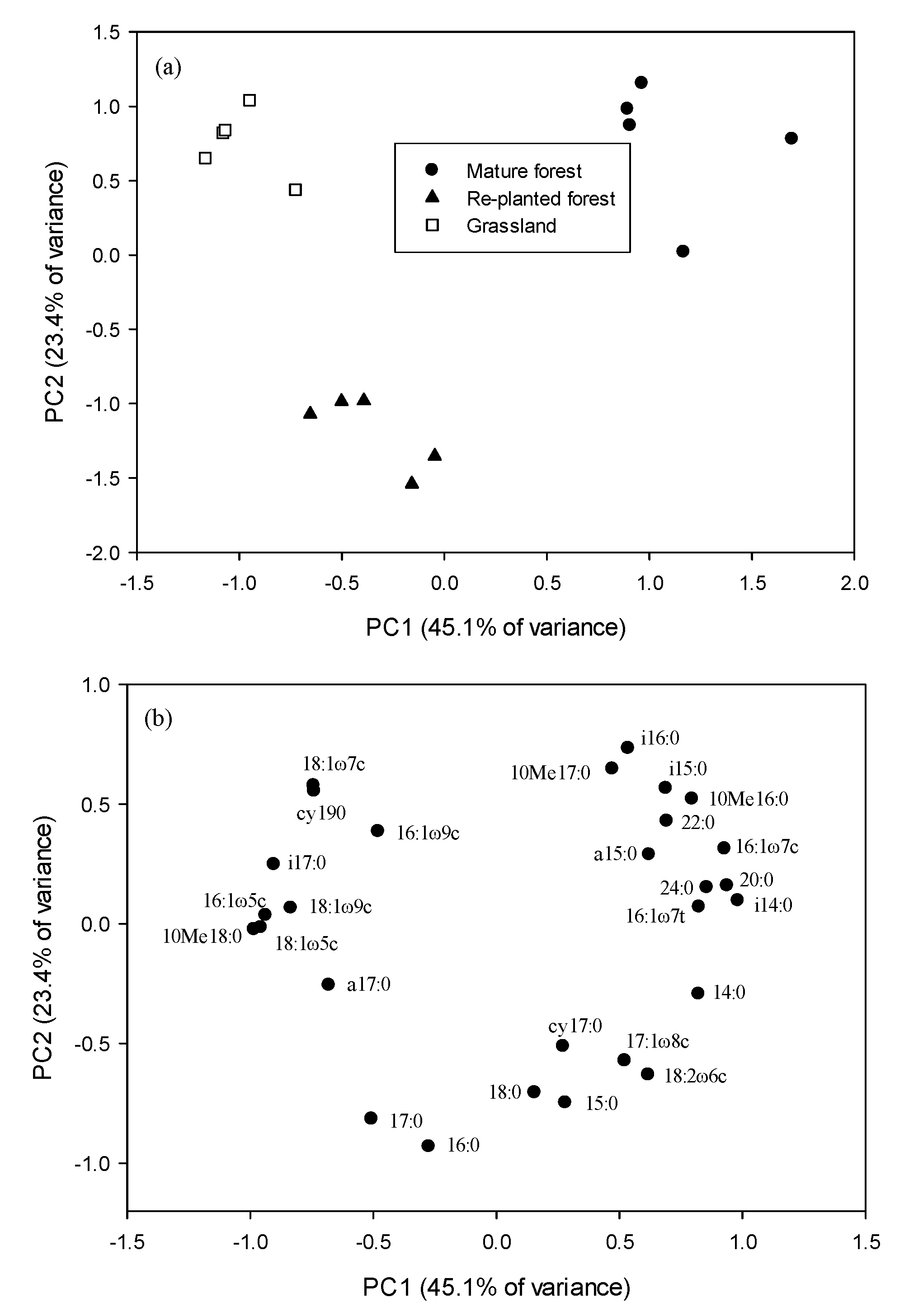 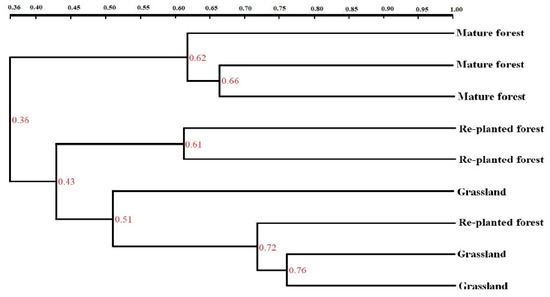