How Do Urban Forests Compare? Tree Diversity in Urban and Periurban Forests of the Southeastern US

Spatio-Temporal Changes in Structure for a Mediterranean Urban Forest: Santiago, Chile 2002 to 2014

There is little information on how urban forest ecosystems in South America and Mediterranean climates change across both space and time. This study statistically and spatially analyzed the spatio-temporal dynamics of Santiago, Chile’s urban forest using tree and plot-level data from permanent plots from 2002 to 2014. We found mortality, ingrowth, and tree cover remained stable over the analysis period and similar patterns were observed for basal area (BA) and biomass. However, tree cover increased, and was greater in the highest socioeconomic stratum neighborhoods while it dropped in the medium and low strata. Growth rates for the five most common tree species averaged from 0.12 to 0.36 cm·year−1. Spatially, tree biomass and BA were greater in the affluent, northeastern sections of the city and in southwest peri-urban areas. Conversely, less affluent central, northwest, and southern areas showed temporal losses in BA and biomass. Overall, we found that Santiago’s urban forest follows similar patterns as in other parts of the world; affluent areas tend to have more and better managed urban forests than poorer areas, and changes are primarily influenced by social and ecological drivers. Nonetheless, care is warranted when comparing urban forest structural metrics measured with similar sampling-monitoring approaches across ecologically disparate regions and biomes. View Full-Text
Keywords: basal area; urban forest biomass; spatial analysis; urban tree growth; urban forest mortality basal area; urban forest biomass; spatial analysis; urban tree growth; urban forest mortality
►▼ Show Figures 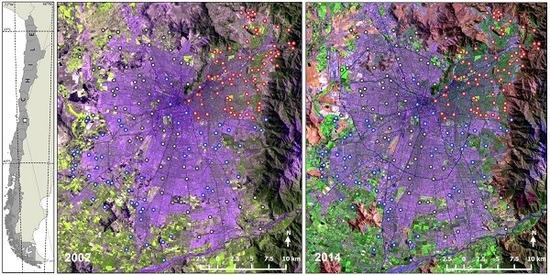