Widespread and economically important European tree species such as Norway spruce, Scots pine, and European beech are projected to be negatively affected by the increasing intensity and frequency of dry and hot conditions in a future climate. Hence, there is an increasing need to investigate the suitability of presumably more drought tolerant species to ensure future ecological stability, biodiversity, and productivity of forests. Based on their distribution patterns and climatic envelopes, the rare, minor broadleaved tree species Sorbus torminalis ((L.) CRANTZ), S. domestica (L.), Acer campestre (L.), and A. platanoides (L.) are assumed to be drought tolerant, however, there is only limited experimental basis to support that notion. This study aimed at quantifying growth and gas exchange of seedlings of these species during drought conditions, and their capacity to recover following drought. For that purpose, they were compared to the common companion species Quercus petraea ((MATTUSCHKA) LIEBL.) and Fagus sylvatica (L.). Here, potted seedlings of these species were exposed to water limitation followed by rewetting cycles in a greenhouse experiment. Photosynthesis and transpiration rates, stomatal conductance as well as root and shoot growth rates indicated a high drought resistance of A. campestre and A. platanoides. Sorbus domestica showed a marked ability to recover after drought stress. Therefore, we conclude that these minor tree species have the potential to enrich forests on drought-prone sites. Results from this pot experiment need to be complemented by field studies, in which the drought response of the species is not influenced by restrictions to root development. View Full-Text
Keywords: Acer; Sorbus; regeneration; drought tolerance; resistance; recovery Acer; Sorbus; regeneration; drought tolerance; resistance; recovery
►▼ Show Figures 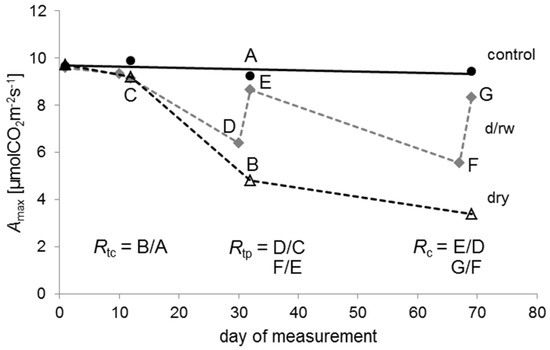