What Is the Effect of Quantitative Inversion of Photosynthetic Pigment Content in Populus euphratica Oliv. Individual Tree Canopy Based on Multispectral UAV Images?
Next Article in Special Issue

Agrilus planipennis (Coleoptera: Buprestidae) is the most serious invasive pest of ash trees (Fraxinus spp., Oleaceae) in the world. It has not yet reached the range of olive tree plantations, however it has been shown to complete its life cycle in this host tree. This pest native to East Asia was first found in Europe in Moscow in 2003 and has been spreading ever since. The aims of this study were to determine if the southern border of the range has already reached the Caucasus and to assess the potential range in this region based on host availability and heat availability. In 2021, we surveyed ash trees south to the known range in Russia. We did not find the pest in six cities in the North Caucasus region but found it in the city of Azov close to the Caucasus. Analysis of information about 550 localities of ash trees in the Caucasus showed that Fraxinus spp. is common throughout the region. The calculation of annual growing degree days base 10 °C indicated that the places where Fraxinus spp. grow above 1500 m are too cold for A. planipennis and therefore could potentially become a refuge for ash trees. The spread of A. planipennis to the Caucasus is of concern. First, the forest ecosystems of this region are endangered, since European ash Fraxinus excelsior is much more common there than in the currently infested regions in Russia. Second, the Russian Caucasus can become the gateway to Georgia, Armenia, Azerbaijan, Turkey and other countries of the Middle East and Southern Europe. We propose using Fraxinus angustifolia, F. ornus and Olea europaea growing in the Caucasus and adjacent regions as sentinel trees for the monitoring and pest risk assessment of these tree species. View Full-Text
Keywords: invasive pest; EAB; Fraxinus excelsior; Fraxinus angustifolia; Fraxinus ornus; Olea europaea; Caucasus; Russia; Armenia; Georgia; Azerbaijan invasive pest; EAB; Fraxinus excelsior; Fraxinus angustifolia; Fraxinus ornus; Olea europaea; Caucasus; Russia; Armenia; Georgia; Azerbaijan
►▼ Show Figures 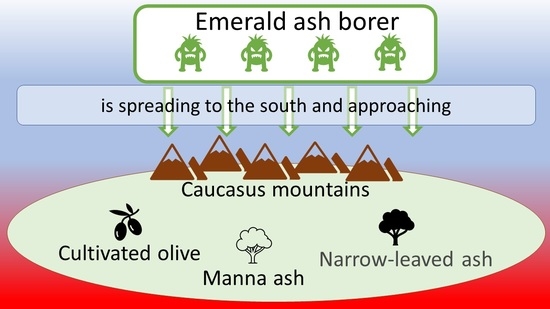