Perspectives on the Psychological and Physiological Effects of Forest Therapy: A Systematic Review with a Meta-Analysis and Meta-Regression

Urbanization has been found to affect the health of city dwellers, which has spurred research on the positive effects of nature and their use in promoting public health [1]. A sedentary lifestyle, unhealthy eating habits, and unplanned urbanization accompanied by a lack of exercise are known risk factors for various chronic diseases, such as obesity, diabetes mellitus, and metabolic syndrome [2]. An urban upbringing and life are known to cause more psychological stress than a rural life [3,4]. Consequently, there is a growing body of literature on the potential benefits of human-nature relationships, and studies are being performed to investigate and discover the health-promoting benefits of forest exposure [5,6]. Research, especially when conducted from the perspective of preventive medicine, has illustrated how exposure to greenness enhances the well-being of people visiting forests [7,8,9]; additionally, studies have monitored the changes in physiological and psychological parameters after exposure to forest environments [10,11].
Forest-based interventions—such as simple walks, meditation, and leisure activities performed in forests—have contributed to physiological and psychological recovery, as these interventions have been found to reduce the levels of depression, anxiety, fatigue, and stress; enhance social cooperation; induce a sense of well-being; and aid in recovering self-esteem [12,13,14,15,16,17]. This phenomenon has been reported along with supporting biological findings, including significantly lower salivary cortisol concentrations and serum malondialdehyde (MDA) levels, leading to a reduction in blood pressure [18,19,20,21,22,23,24].
The primary research, systematic reviews, and meta-analyses conducted on this topic so far have revealed various beneficial health effects of forest-based interventions [25,26,27,28]; however, the overall physical and mental outcomes have not been systematically reviewed by identifying moderator effects on individual covariates. Therefore, we first attempted forest therapy to determine the outcomes of forest interventions, which were then used to investigate the effectiveness of forest healing based on its physical and psychological effects. In this meta-analysis, we aimed to synthesize data obtained from randomized clinical trials on how forest-based interventions improved the general well-being of participants, as well as investigate whether the resulting psychological and physiological changes interact with each other. We attempted to include studies involving both psychological scores and biological markers, such as oxidative and hypertensive properties, to uncover the association between the psychological changes and antioxidant and antihypertensive properties of forest therapy.

Through December 2021, we conducted comprehensive literature searches in the PubMed, Embase, and Cochrane databases using terms from the Medical Subject Headings (MeSH) list and text keywords; our search strategy was as follows: population of interest (i.e., healthy volunteers or patients diagnosed with underlying diseases), interventions (exposure to forest environments), and outcomes (mental health measurement scores and biomarkers) (Supplementary Table S1). Our search focus was papers with an obvious forest-based intervention and a comparable control group. We conducted the initial search without restrictions on language or the type of study; subsequently, we manually searched for additional studies in clinical trial databases and reference lists.

Two independent investigators analyzed the titles and abstracts based on the inclusion and exclusion criteria, and examined the full-text articles using the same criteria. After selecting the articles, the authors independently extracted data using a data extraction form. In case of discrepancies between the two authors’ opinions, they reached an agreement through group discussions. All the investigators evaluated and discussed the final articles selected for inclusion. To prevent overlapping data and to maintain meta-integrity, the references and data from each included study were carefully crosschecked.

All variables with improvements were recorded as continuous data. SMDs (Hedges’ g) with 95% confidence intervals (CI) and the DerSimonian and Laird random-effects model were used to adequately analyze the overall SMDs, and because each study had a different follow-up period, the outcome value recorded at the end of the study was used [3].
Cochran’s Q test and the I2 statistic were used to assess the proportion of total heterogeneity due to within-study and between-study variations. In the meta-regression analysis, we used a restricted maximum likelihood estimator of the variance to analyze the effects of potential moderators (e.g., number of patients, age, female participation rate, body mass index (BMI), country, study design, crossover study, underlying disease, forest program education, forest therapist, and forest program duration). A two-sided p-value ≤ 0.05, or 95% CI not containing the null value (ratio = 1), were considered statistically significant. This analysis was performed with R software version 4.0.3 (R Foundation for Statistical Computing, Vienna, Austria) [3].
To assess methodological quality, the risk of bias and methodological quality were evaluated in duplicate using the Cochrane Collaboration tool. We assessed six parameters: (1) random sequence generation; (2) allocation concealment; (3) blinding of participants, personnel, and outcome assessors; (4) incomplete outcome data; (5) selective outcome reporting; and (6) other sources of bias. All domains were classified as having high, low, or unclear risk of bias.
Potential publication bias was assessed using a funnel plot in which standard errors were used as a measure of research sample sizes and ratio assessments of treatment effects. We considered that the overall effect size of the studies would be symmetrically distributed in the absence of publication bias. To statistically evaluate publication bias, we used the Begg and Mazumdar rank correlation and Egger’s linear regression tests.

During the initial search, we identified 861 articles from different electronic databases (PubMed, n = 267; Cochrane, n = 9; Embase, n = 582) and manual searches (n = 3). Sixty-one studies that contained overlapping data or appeared in more than one database were excluded. After screening the titles and abstracts, 682 studies were eliminated because they were unrelated to the topic in question. Of these, 81 studies were excluded for the following reasons: no target diseases (n = 25), unclear forest therapy (n = 16), no outcome value (n = 8), commentary or letter (n = 30), and others (n = 2). Finally, 17 studies met our selection criteria for the qualitative and quantitative syntheses (Figure 1).
A systematic review of the 17 studies was conducted to assess the differences and subject descriptions in detail (Table 1). The total number of participants was 1418, including both healthy volunteers and patients diagnosed with underlying diseases; the average age was 11.8 to 70.5 years. The studies were conducted in different countries across the globe, and based on the meta-analysis, the study designs included randomized controlled trial, cross-sectional, and crossover studies.

The selected studies were critically appraised by the authors using the risk of bias measure of the Cochrane Collaboration tool. Of the 17 studies, nine described randomization methods, and only three conducted allocation concealment. The overall quality of the studies was evaluated as low because the exposure involved was an environmental exposure that could not be controlled in a laboratory.

We used the Risk of Bias Assessment tool for Non-randomized Studies (RoBANS) to assess the quality of the observational studies (Figure 5). Two studies had a high risk of bias, one had an unclear risk of bias, and the other six had a low risk of bias in the participant selection process. The overall risk of bias was considered low when the effect size was not affected in the subgroup analysis.

Publication bias was evaluated using the method shown in Figure 6. The funnel plots of the SMDs resulting from forest therapy appeared asymmetrical for all outcomes owing to insufficient observations. The p-values obtained through Begg and Mazumdar’s correlation and Egger’s regression coefficient tests suggest evidence of publication bias or small-study effects in this meta-analysis; this was not observed for the depression and well-being scores.

The following supporting information can be downloaded at: https://www.mdpi.com/article/10.3390/f13122029/s1, Table S1: Search strategy for the review; Table S2: MOOSE checklist for meta-analyses of observational studies.

The datasets generated and analyzed during the current study are not publicly available because of a lack of permission but are available from the corresponding author upon reasonable request.

We would like to thank Backil Sung (Department of Biology, Pacific Union College) to reviewing the manuscript, and Editage for editing and reviewing this manuscript for English language. 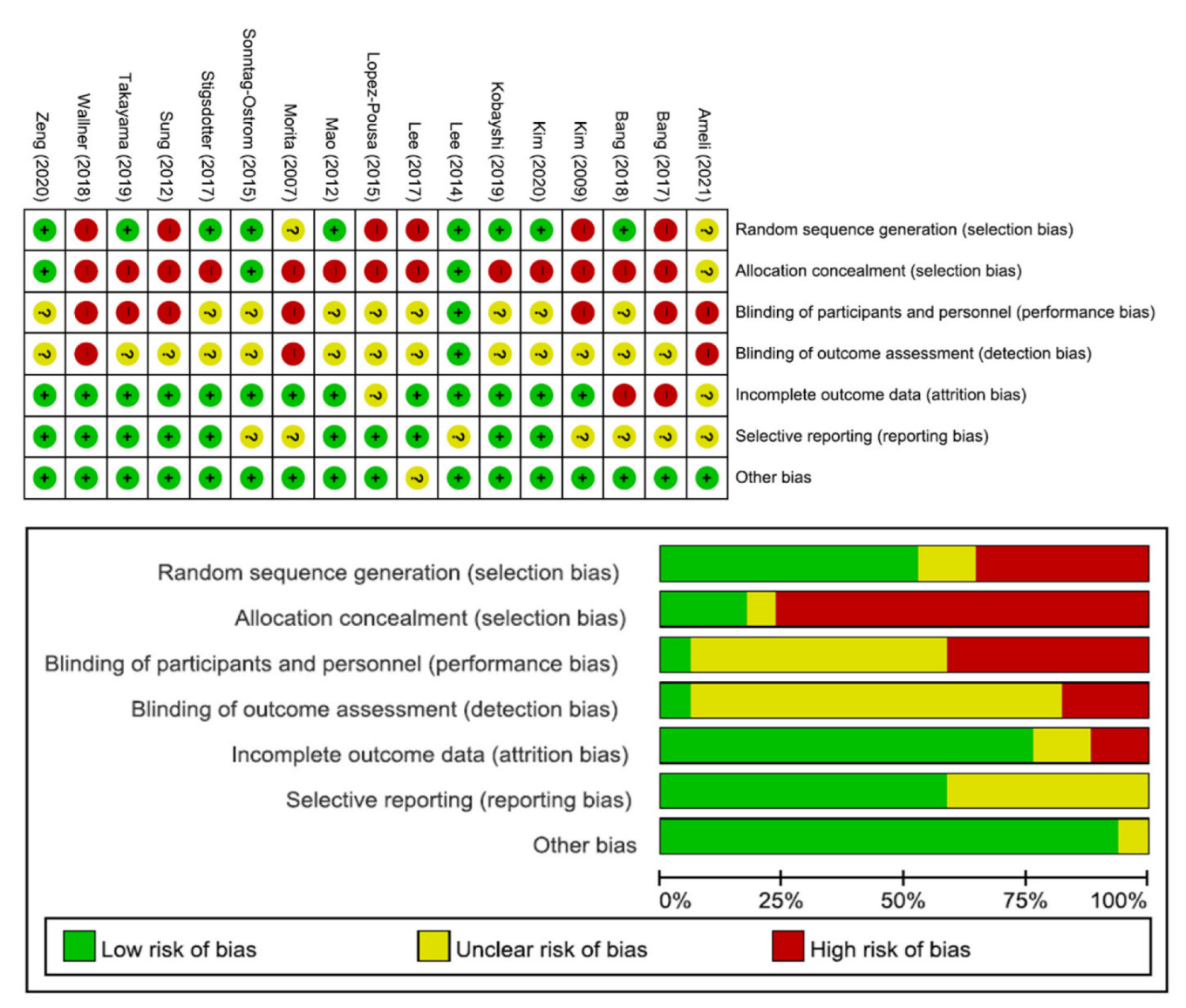 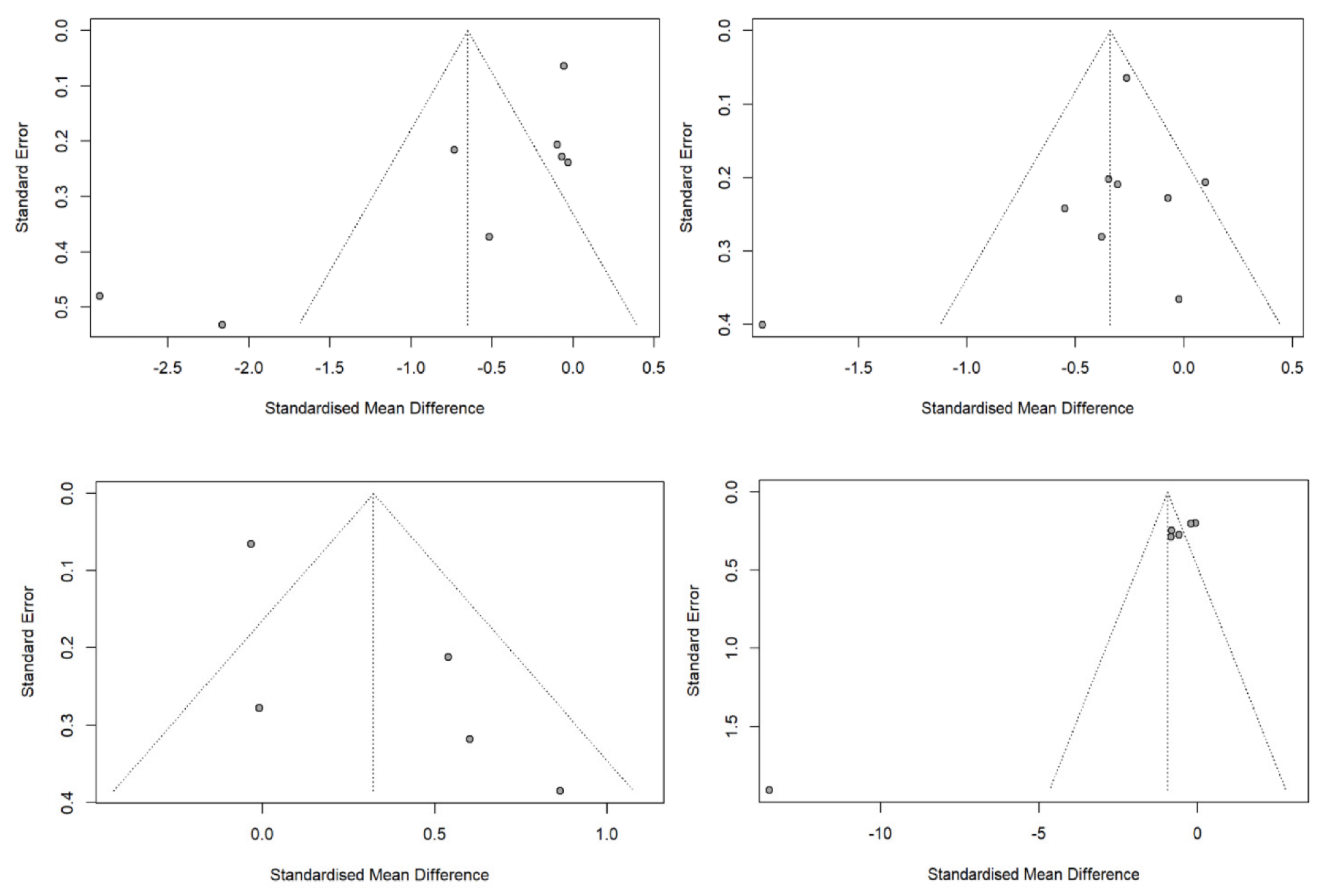