The invasive pine wood nematode (PWN), Bursaphelenchus xylophilus, causal agent of pine wilt disease, was first reported in Europe, near Lisbon, in 1999, and has since then spread to most of Portugal. We here modelled the spatiotemporal patterns of future PNW natural spread in the Iberian Peninsula, as dispersed by the vector beetle Monochamus galloprovincialis, using a process-based and previously validated network model. We improved the accuracy, informative content, forecasted period and spatial drivers considered in previous modelling efforts for the PWN in Southern Europe. We considered the distribution and different susceptibility to the PWN of individual pine tree species and the effect of climate change projections on environmental suitability for PWN spread, as we modelled the PWN expansion dynamics over the long term (>100 years). We found that, in the absence of effective containment measures, the PWN will spread naturally to the entire Iberian Peninsula, including the Pyrenees, where it would find a gateway for spread into France. The PWN spread will be relatively gradual, with an average rate of 0.83% of the total current Iberian pine forest area infected yearly. Climate was not found to be an important limiting factor for long-term PWN spread, because (i) there is ample availability of alternative pathways for PWN dispersal through areas that are already suitable for the PWN in the current climatic conditions; and (ii) future temperatures will make most of the Iberian Peninsula suitable for the PWN before the end of this century. Unlike climate, the susceptibility of different pine tree species to the PWN was a strong determinant of PWN expansion through Spain. This finding highlights the importance of accounting for individual tree species data and of additional research on species-specific susceptibility for more accurate modelling of PWN spread and guidance of related containment efforts. View Full-Text
Keywords: pine wood nematode; pine wilt disease; forest pests; Iberian Peninsula; invasive alien species pine wood nematode; pine wilt disease; forest pests; Iberian Peninsula; invasive alien species
►▼ Show Figures 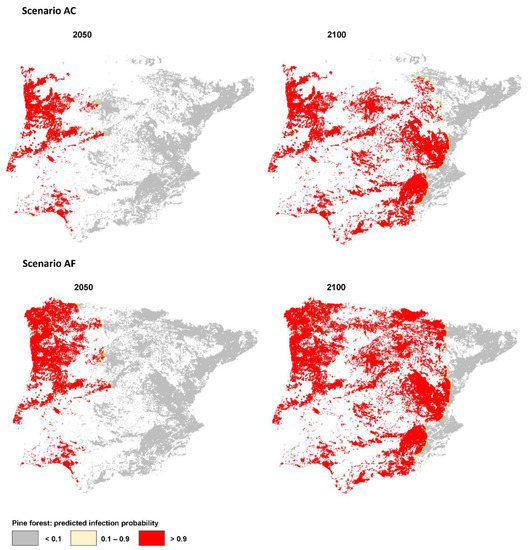