To explore the molecular regulatory mechanism of high-carbon (C) sequestration Fraxinus mandshurica Rupr. (F. mandshurica) provenance and the expression profile of F. mandshurica during nitrogen (N) starvation, the foliage and roots of the annual Wuchang (WC) seedlings with greater C amount and Hailin (HL) seedlings with smaller C amount, which were grown in N-deficient nutrition and complete N, were used for RNA-seq and physiological determination, respectively. One thousand and fifty-seven differentially expressed genes (DEGs) between WC and HL and 8173 DEGs related to N deficiency were identified, respectively. The root of F. mandshurica responded to N deficiency more strongly than foliar. The target genes that responded to N deficiency in roots were mainly regulatory genes (transcription factors, hormones and protein kinases), and their response patterns were upregulated. The growth and N concentration in both WC and HL were reduced by the N deficiency, which might result from the decrease of the leaf Nitrate reductase (NR) and glutamine synthetase (GS) enzyme activity and ABA content, although the root-to-shoot ratio; lateral root number; lignin content; endogenous hormones content (GA, IAA and ZR); root GS and glutamate synthetase activity and transcriptional level of most of the regulatory genes were increased. The C sequestration capacity in WC was greater than that in HL, which related to the higher GS enzymes activity and transcriptional levels of regulatory genes and metabolic genes (terpenes, carbohydrates, and lipid energy). However, the C sequestration advantage of WC was significantly reduced by the N deficiency, which was due to the smaller response to N deficiency compared to HL. View Full-Text
Keywords: differentially expressed genes; N metabolism; C metabolism; RNA sequencing differentially expressed genes; N metabolism; C metabolism; RNA sequencing
►▼ Show Figures 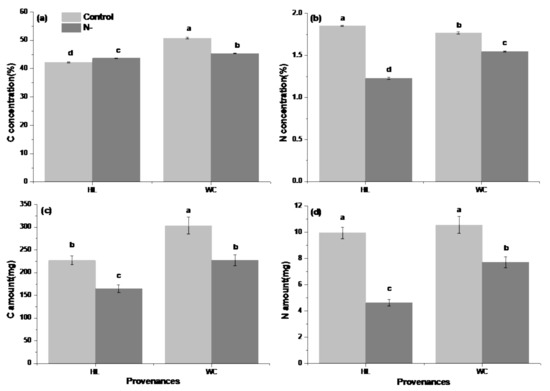