Importance of Soil, Stand, and Mycorrhizal Fungi in Abies balsamea Establishment in the Boreal Forest

Research highlights: To understand differences in the establishment of balsam fir regeneration observed in the boreal forest, we examined how soil layer and microorganisms explained differences in growth and mycorrhization in three different stand types. Our experiment revealed positive and negative effects on growth of seedlings, and highlights the importance of biotic interactions in balsam fir establishment. Background and Objectives: In a context of climate change, understanding tree migration can be examined through changes in tree regeneration. At the ecotone between mixed and conifer boreal forest, regeneration of balsam fir northward is of particular interest because it thrives better under aspen-dominated stands as compared to adjacent spruce-dominated stands. As the understorey differs between these stands, with more Ericaceae under spruce and different ectomycorrhizal fungal communities in organic and mineral horizons, we hypothesized that biotic factors could explain differences in balsam fir establishment. Materials and Methods: Using a growth chamber experiment, we tested if differences in soil layers and modification of soil fungal communities would affect germination, mycorrhization, and growth of balsam fir seedlings in three different stand vegetation. We compared 12 treatments and followed 120 seedlings over three growth seasons. Results: We found similar survival in soils from aspen- and spruce-dominated stands, and a greater biomass on organic layers. In addition to this, a greater mycorrhization rate was found in aspen soils but improved germination in spruce soils. The presence of Ericaceae in spruce soils was associated with lower mycorrhization but did not affect other traits. Sterilization and therefore microorganisms affected mainly the number of ectomycorrhizae and the investment in root biomass. Finally, mycorrhization and biomass were correlated, but independent from N nutrition measured in needles. Conclusions: Our results highlighted the positive effects of organic soil layers and of mycorrhization on biomass, and showed that mycorrhization was increased under aspen as compared to other stand types. Our experiment also revealed positive effects of spruce soil on fir germination and showed that fir was able to grow and survive in all conditions. Our study suggests that fir establishment is affected by belowground multi-species interactions, and therefore highlights that biotic interactions shall be taken into account to understand and predict future tree migrations in the boreal forest. View Full-Text
Keywords: ectomycorrhizae; trembling aspen; black spruce; Ericaceae; seedbed ectomycorrhizae; trembling aspen; black spruce; Ericaceae; seedbed
►▼ Show Figures 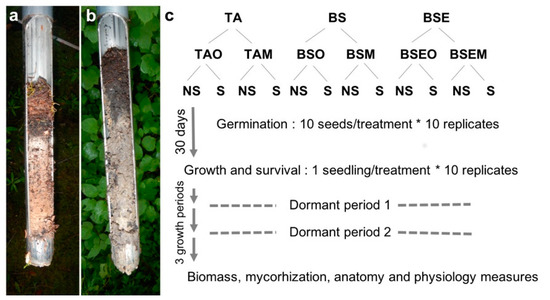